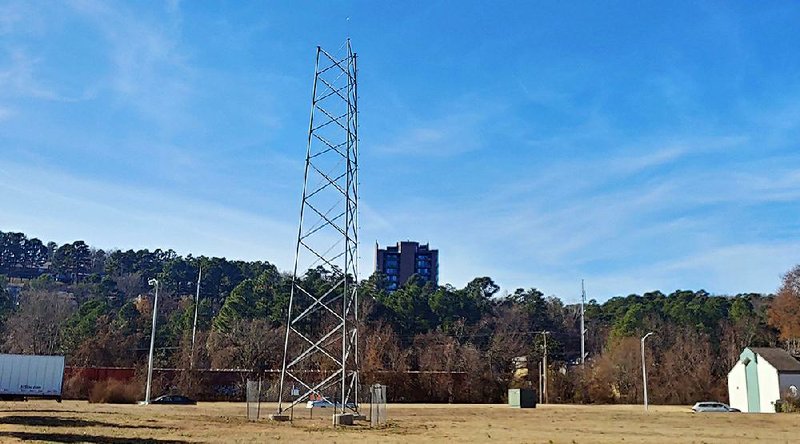 Little Rock television station KATV, Channel 7, is again seeking permission to extend a broadcast tower at its new Riverdale home to an altitude that would exceed city height limits.

City planning officials back the request, which is scheduled to be heard by the Little Rock Board of Adjustment on Monday. The tower has garnered opposition from some neighbors, most notably residents in the Treetops condominiums, who say the tower mars their Arkansas River view.

The station, a downtown fixture at Fourth and Main streets for 50 years, wants to relocate its studios and newsroom to a Riverdale area office building.

A limited liability company, KATV, LLC, purchased the property at 10 Turtle Creek Lane on May 31 for $4,368,000 from the Student Loan Guarantee Foundation of Arkansas Inc., according to online real estate records maintained by the Pulaski County assessor's office.

The two-story, 26,615-square-foot office building sits on a nearly 4-acre site between Riverfront and Brookwood drives. It was built in 2007.

It was the same month that the foundation obtained a building permit to build a 75-foot high tower on an undeveloped portion of the property. The height is the mandated height limit under city zoning ordinances and requires no approval from the Board of Adjustment.

In April, station officials withdrew its request to allow construction of a 100-foot tower on the property after two dozen residents of Treetops appeared at a Board of Adjustment meeting to oppose the request.

The station now wants to add another 35 feet to the tower already built on the property because, according to station officials, it is the minimum height needed for the station to operate from the Riverdale location.

"Given that the tower is critical to provide a broadcast signal and fundamental to station operation, we respectfully request a variance to the ... limit of 75 feet to allow this tower height of a 110 feet," the station general manager, Mark Rose, said in an Oct. 21 letter to Dana Carney, who heads zoning and planning subdivisions for the city Planning and Development Department. "We believe that the variance is justified and will be a benign element in the neighborhood landscape."

Rose cited studies showing that 110 feet is "the optimum minimum height to serve this location taking into consideration the height of the engineered foundation, the signal path, the required [5-foot] lighting rod which is affixed atop the tower and the eventual growth of trees."

A small antennae or dish will be attached near the tower's top but it won't exceed the top of the tower itself, he said.

Both Rose and city planning officials cited the location of another tower in the Riverdale area. A Signal Media radio station on Cottondale Lane has a 154-foot tower.

City planning officials say they support KATV's request, which they said is "reasonable."

"The proposed tower height of 110 feet will not be out of character with the heights of other buildings and tower structures in this general area," according to a staff analysis. "Staff believes the proposed 110-foot-tall tower will have no adverse impact on the adjacent properties or the general area."

Neither Bob McKuin, a resident of the condominium who has spoken on behalf of Treetops residents nor their attorney in previous dealings with the Board of Adjustment, Philip Kaplan, returned telephone calls or emails Monday afternoon.