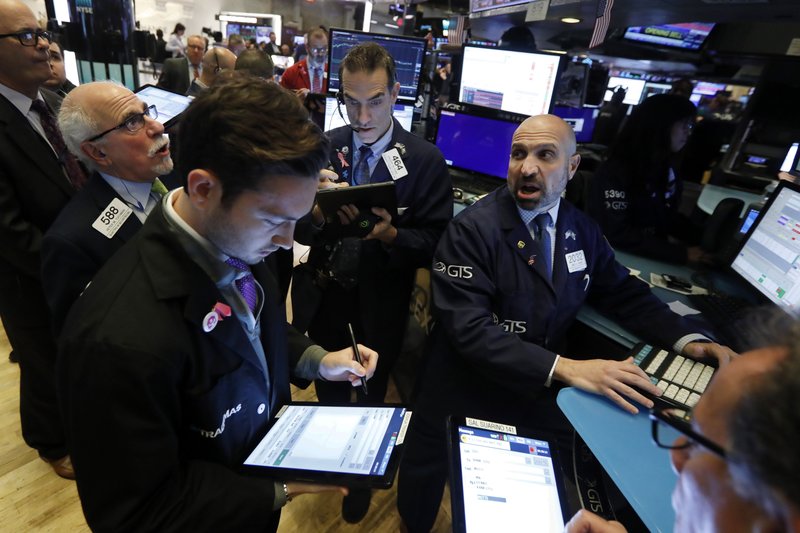 Technology companies led a broad slide for stocks on Wall Street on Monday, handing the market a downbeat start to the month after notching strong gains in November.

Industrial, communication services and financial stocks also accounted for a big share of the sell-off. Energy stocks notched the biggest gain, aided by a 1.4% increase in the price of U.S. crude oil. Bond yields rose.

Wall Street has been hoping that the world's two biggest economies can make progress toward at least stalling new tariffs scheduled for Dec. 15 on $160 billion worth of Chinese products, including smartphones and laptops. The latest friction between Washington and Beijing could hamper that progress.

"The market is getting increasingly anxious that it's possible, perhaps not likely, that the tariffs are imposed on Dec. 15, thus escalating the tariff trade war," said Quincy Krosby, chief market strategist at Prudential Financial.

The stumbling start to December is a departure from the market's strong performance last month. The S&P 500 closed out November with its best monthly gain since June. Last week also marked the benchmark index's seventh weekly gain in eight weeks. In that time span, the S&P 500, Dow Jones Industrial Average and Nasdaq each set multiple record closing highs.

Investor optimism that the U.S. and China were nearing a trade deal helped spur the market's milestone-setting run this fall, lifting it from a summer slide brought on by recession fears and uncertainty over trade.

The negotiations to end the long-standing trade war could face a tougher path this month following a flareup over Hong Kong, however.

China said Monday that it will suspend U.S. military ship and aircraft visits to the semi-autonomous territory and sanction several American pro-democracy groups in retaliation against Washington for enacting into law legislation supporting anti-government protests.

The law, signed Wednesday by President Donald Trump, mandates sanctions on Chinese and Hong Kong officials who carry out human-rights abuses and requires an annual review of the favorable trade status that Washington grants Hong Kong.

In other trade developments, Trump on Monday accused Argentina and Brazil of hurting American farmers through currency manipulation and said he'll slap tariffs on their steel and aluminum imports to retaliate.

Both South American nations were among a group of U.S. allies that Trump had exempted from steel and aluminum tariffs in March 2018. United States Steel climbed 4.2% and AK Steel rose 4.7% after Trump's remarks.

U.S. manufacturing shrank more than expected in November, according to figures released by the Institute for Supply Management.

Solid job growth, along with consumer spending, have been among the key factors pushing economic growth. But manufacturing has been a weak spot in the broader economy. Still, investors were not expecting the latest data to show further weakness, Krosby said.

"That triggered the market's concerns about the economic underpinning of the economy," she said.

Other key reports are due out this week that should help shed light on the health of the economy.

A report on the services sector, which makes up the bulk of the economy, is expected on Wednesday, as is payroll processor ADP's latest survey of hiring by private companies. The Labor Department will release its closely watched employment data on Friday.