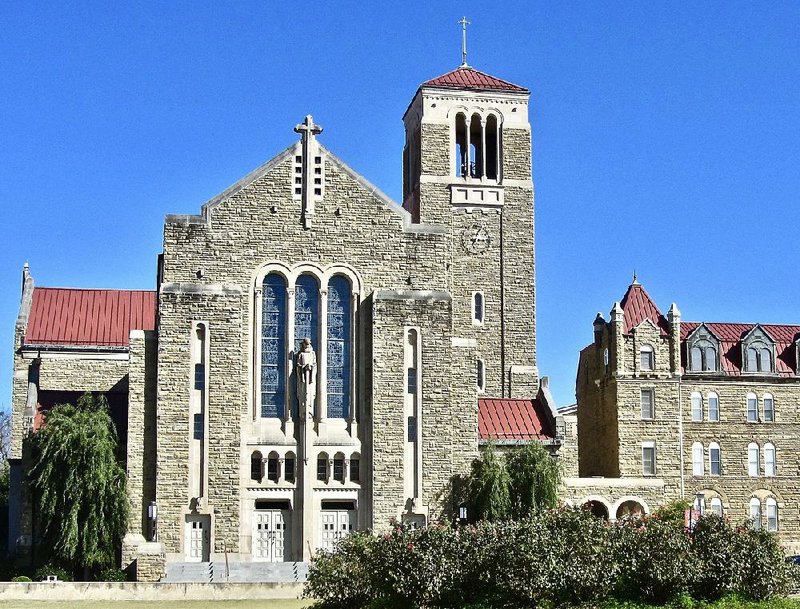 St. Benedict Abbey Church is the most imposing building at Subiaco Abbey.

SUBIACO -- Monk-made peanut brittle spiced with hot pepper sauce and washed down with a swig of abbey-brewed beer would raise eyebrows -- and possibly the roof -- as a humdinger of a mix at a holiday party.

Packaged separately, those disparate treats are sold at Subiaco Abbey. The beer is thanks to Country Monks Brewery, which opened for business in February on the grounds of the venerable religious complex. The Benedictine Brothers also make the peanut brittle (since 1995) and the habanero sauce (since 2003).

Logan County, at the intersection of Arkansas 22 and 197, 110 miles northwest of Little Rock

The peanut brittle and hot sauce can also be ordered online by visiting countrymonks.org.

Along with these and an assortment of other gift-shop items, Subiaco offers December day-trippers an inspiring setting suited to the genuine spirit of Christmas. Founded in 1878 by German-speaking Benedictines from Indiana, it's an outpost of religious diversity in a state only 4% Roman Catholic. The church, built from locally crafted sandstone, conveys splendor and serenity.

The 40 or so monks of Subiaco live by the rule of St. Benedict, who founded the order in sixth-century Italy. His sister, St. Scholastica, is revered as well at the abbey. Along with their religious duties and teaching at Subiaco Academy, the Brothers raise cattle, tend vineyards, run a sawmill -- and make peanut brittle, hot sauce and now beer.

Down a lane from the main abbey facilities, Country Monks Brewery crafts several beers and ales under the direction of Brother Basil Taylor. There's a convivial atmosphere at the bar where the draft brews are pumped. A sizable patio shaded by a tent hints at a German beer garden for sitting and sipping. The beer is also sold in four-pack cans.

The brewery is open to visitors each Saturday, from 9 a.m. to 4 p.m. Its website gives the enterprise a religious context: "It is a ministry for us because it allows us to welcome guests to our monastery as Christ Himself would be welcomed. Likewise, the profits generated go to the continuous care of our elder monastic brothers in our Health Center."

The Rev. Richard Walz created the hot sauce after he returned from service in Central America. He brought back seeds of habanero peppers and planted them in the abbey's garden. The crop continues to provide the main ingredient for what is labeled as "Monk Sauce" and described as "industrial strength."

What makes Subiaco's sauce distinctive, according to the website "is the generous amount of peppers we use. We pick the peppers when they are either at their peak growth while green (producing our green sauce) or when they reach their full ripeness where they turn red (producing our red sauce)."

The peanut brittle, so popular that the gift-shop supply runs out some days, is marketed with no false modesty as having "four secrets that make our product the best in the nation." They include the "extraordinarily large amount of peanuts," personal attention rather than mass production, the addition of baking soda to make the brittle easier to chew, and the avoidance of any dairy products.

Visitors with no interest in beer, hot sauce or peanut brittle can explore the abbey via a self-guided tour brochure. It's available at Coury House, also the site of the gift shop.

A highlight of the walking tour is St. Benedict Abbey Church, a modified Romanesque design with a campanile rising to 120 feet and graced by four bells named for female saints. Inside, the most striking feature is the high altar, displaying a cross of wood covered by gold leaf. Christ's body on the cross was carved from olive wood and overlaid with silver. The effect is dazzling, any season of the year. 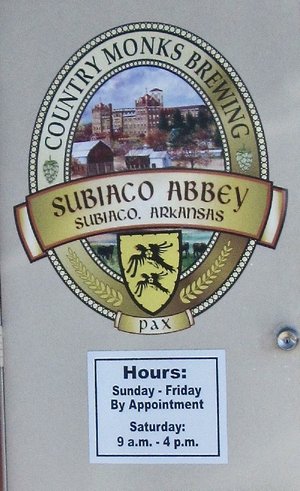 Photo by Special to the Democrat-Gazette/MARCIA SCHNEDLER
Subiaco Abbey’s Country Monks Brewery has been open since early this year.