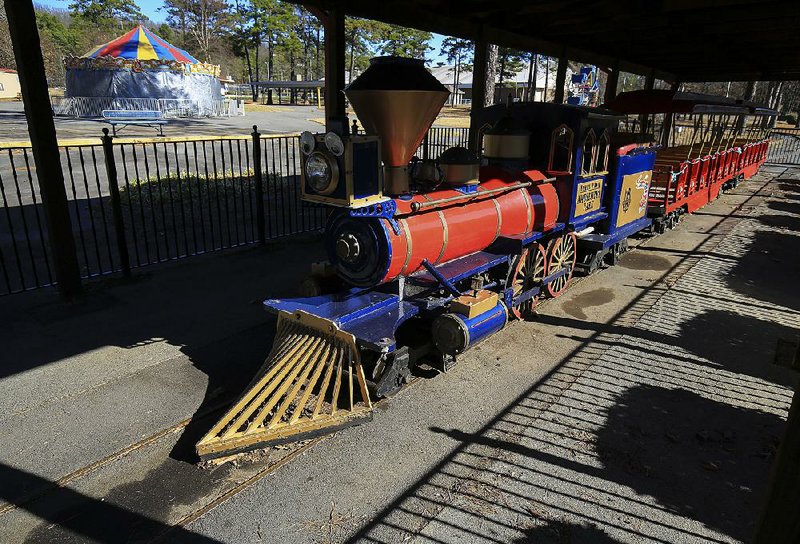 Arkansas Democrat-Gazette/STATON BREIDENTHAL --12/2/19-- The train at Funland in North Little Rock's Burns Park sits parked under cover Monday as rides are covered with tarps for the winter months. - Photo by Staton Breidenthal

North Little Rock Parks and Recreation Department officials are analyzing ways to increase revenue at the Funland Amusement Park and the Burns Park concessions stands, which the agency's director said is projected to lose $60,000 this year.

Mayor Joe Smith said last week that the city has explored various options in the past to deal with the negative balance from concessions, such as handing off control to parents or team leaders, but that it's generally easier for the city to manage the stands.

"We have had others take over concessions in the past, but conflicts always start to pop up," he said. "What kind of food is being served, what kind of buns are used or hot dogs are served. Some in-fighting always occurs."

North Little Rock officials approved the city's 2020 budget on Nov. 25. North Little Rock Finance Director Ember Strange estimated that the city will take in about $71.4 million in revenue during fiscal 2020, a 2.2% increase from the $69.9 million projected for fiscal 2019.

The total of projected parks expenditures for 2020 is $8.3 million, and parks concessions are forecast to make up $253,524 of that total. The projected revenue for the parks department is the same total as the expenditures.

Department Director Terry Hartwick said he wasn't overly concerned about Funland and the concession stands not making a profit.

"Not everything in our city has to make money," he said.

Hartwick said millions of people go through Burns Park every year and that services like Funland and concessions are worth the potential annual loss.

"It's more of a service," he said. "People might go to Funland while one of their family members are playing in one of our tournaments. Also, you want people to be able to eat at the park without having to drive somewhere else."

In October, Funland hosted 30 birthday parties, with about 350 children and adults participating in the activities around the park, according to a report from the Parks and Recreation Department. A profit and loss chart for October also showed concessions had taken in $512.75 with $473.11 in expenses, leaving the department with about $40 in revenue.

Hartwick said he's looking at food trucks as a possible answer to the concessions' revenue issue.

During a public meeting to review the proposed 2020 budget on Nov. 12, Council Member Debi Ross made note of the parks' projected 2019 expenditures. But last week Hartwick clarified the numbers, saying the "concessions" budget line covers more than food expenditures.

"The money line she was looking at includes Funland and more," Hartwick said. "It was much more than just concessions."

Hartwick said that after making those adjustments, concessions and the Funland Amusement Park had a $60,000 loss.

Print Headline: North Little Rock looks at finances of park amenities; 'not everything in city has to make money,' official says