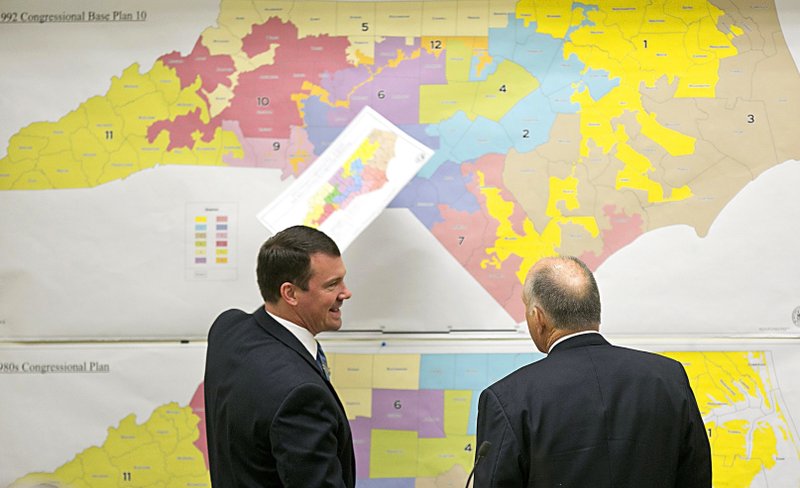 The three-judge panel unanimously decided it was too late in the election cycle to receive evidence and testimony that would be necessary to consider detailed redistricting arguments from the lawmakers and from Democratic and independent voters who challenged the latest congressional maps.

The North Carolina primary for hundreds of state and local elected positions is March 3, and candidate filing opened Monday. The judges had suspended congressional filings for all 13 seats while they reviewed the case, but Superior Court Judge Paul Ridgeway said from the bench the State Board of Elections can now start receiving filings from U.S. House hopefuls.

"There's simply not sufficient time to fully develop the factual record necessary to decide the constitutional challenges to the new congressional districts without significantly delaying the primary elections," Ridgeway said. "It is time for the citizens to vote."

While 10 of the 13 current U.S. House members are Republicans in a state considered a presidential battleground, the new map would appear to give Democrats a good chance of picking up two more seats in 2020. The additional Democratic victories could help the party retain control of the U.S. House next year.

In late October, the same judges blocked the use of the 13 district boundaries approved in 2016 because they were likely unlawful partisan gerrymanders. While not ordering a new map, the judges had suggested a delayed primary could be avoided if lawmakers redraw the map quickly.

By Nov. 15, the General Assembly had approved a replacement with district lines that appear to threaten the reelections of Republican Reps. George Holding of Raleigh and Mark Walker of Greensboro.

But the voters who sued over the 2016 map said the new boundaries were still unlawful partisan gerrymanders that violated the state constitution. They pointed to data showing 10 of the districts remained extreme partisan outliers compared to "nonpartisan" maps created by a redistricting expert, packing Democrats into five districts so that the others are noncompetitive. They wanted the judges to hire a third-party expert to draw them again.

Lawyers for Republican legislators said the case was moot because they created a new map that complied with the state court's suggestions to perform the drawing in public and without the use of partisan data.

"Although one can certainly argue that the process was flawed or that the result is far from ideal, the net result is that the previously flawed 2016 congressional map has been replaced," Ridgeway said. Lawyers for both sides made oral arguments Monday before Ridgeway read the panel's decision.

The plaintiffs -- whose lawsuit has been bankrolled by a national Democratic group -- did not immediately respond to an email seeking a response to the decision. They could still ask state appeals courts to intervene.

Republican lawmakers were pleased with the ruling, which they said stopped a concerted effort by the Democratic Party to get judges to redraw boundaries that favored the party.

"It's time now to stop the endless litigation and out-of-state lawyering around North Carolina's redistricting process and let the people determine their congressional representatives," state Reps. David Lewis and Destin Hall said in a news release.

The Republican-controlled General Assembly was ordered in September to redraw dozens of state legislative districts by these same judges, who declared those boundaries were illegal partisan gerrymanders. Both congressional and legislative districts will be redrawn in 2021, based on 2020 census figures.