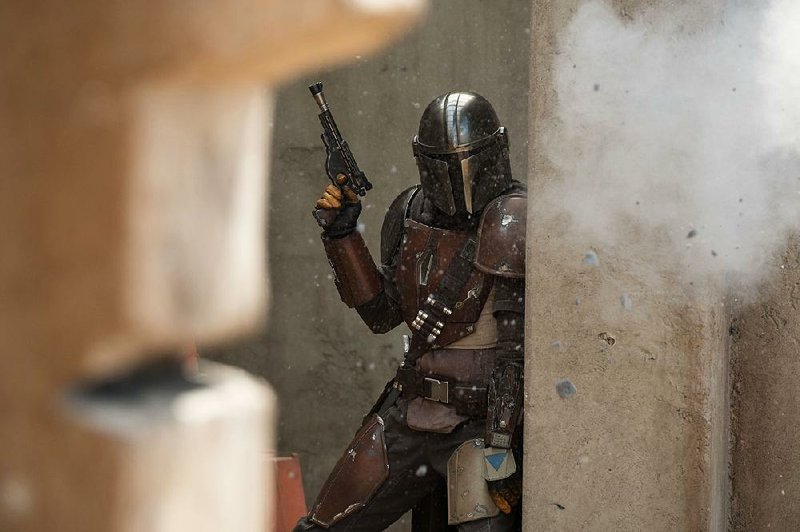 Pedro Pascal (Game of Thrones) plays the title character in Disney Plus’ new show The Mandalorian. The character is a bounty hunter in his Boba Fett get-up, but will we ever see him take off his helmet.

Queuing up the first episode of The Mandalorian, the big-ticket offering in the recent launch of the category-killer streaming TV service called Disney Plus, it's impossible not to recall that great run-along-now line from Arrested Development's Lucille Bluth: "Here's some money. Go see a Star War."

As Lucasfilm's first live-action Star Wars television series, The Mandalorian costs $6.99 a month -- which is surely just an introductory fare for the first of us who get in line. I opted for the yearly plan ($69.99, thanks) not because I'm dying to have more Disney content crammed into my eyeholes, earholes and air holes (especially after that nauseating Little Mermaid Live! production on Disney-owned ABC in November) but because surrender just seemed to be the only option left to click.

The mouse empire is coming for us with all of its firepower -- princesses, mermaids, Marvel heroes, Muppets, droids, Bart Simpson, you name it. It doesn't just feel like we're drowning in content; we've already drowned. This is Disney's master plan: take up all the air that's left.

As for The Mandalorian, there's not a lot to say yet except to report the good news that it is very much in keeping with a Star War -- visually intriguing, amusingly adventurous and light on its feet, a space-Western comfortable with the tropes of cinema culture and common reference points. This is clear the moment the Mandalorian himself (Pedro Pascal of Game of Thrones), in his Boba Fett get-up, enters a grimy backwater saloon filled with creature criminals and demonstrates that he's the fastest draw around -- it's cowboys and aliens.

The episode acquaints us generally, though certainly not deeply, with the Mandalorian's busy and often violent work as a bounty hunter -- so busy, alas, that it's not clear if or when we'll ever see him take off his helmet.

It's set during a reconstruction era in an even farther away part of that galaxy far, far away, after the collapse of the Empire but before the rise of the fascist First Order (in other words, in that void between Return of the Jedi and The Force Awakens). With civil war as Star Wars' continual backdrop, the series tantalizingly suggests that it might make time to explore the notion that an entire galaxy can ever really be ruled. What about all the planets the war never gets to?

While the people behind The Mandalorian have their thinkin' caps on, it might also help to know why bounty hunting -- the capture of humanoids and other species who are in financial hock to gangsters, crime lords and random shady lenders -- is such a recurring theme in Lucas lore. We see the Mandalorian deliver his deep-frozen cargo and collect the bounty, where he informs his client that he doesn't take Imperial credits anymore. "I don't know if you've heard, but the Empire is gone," he says.

The same client offers the Mandalorian a lead on a newer, riskier job, which sends him to the lair of another heavy -- sorry, with Star Wars, one never really knows who anyone is until there's an action figure on the toy shelves. But I can tell you this guy is played by none other than the dutifully doleful German filmmaker Werner Herzog.

That's one nice thing about The Mandalorian: As conceived and written by Jon Favreau (the actor/director, not the political podcaster), the series immediately shows signs of a sharp sense of humor about itself, which has always been a key ingredient to any successful Star Wars outing. Favreau and company also have great fun sprinkling their scenes with all the little gizmos and weirdos that let fans know we're in good hands, that the child within is still being served. In addition to the oddly satisfying sight of one of Jabba the Hutt's preferred species of lap monkey being fricasseed on a rotisserie spit, there are landspeeders, R2 units and, at long last, a Star Wars toilet.

The Mandalorian's new gig leads him to another planet, where he meets a pig-snouted rancher played by Nick Nolte. (You go, Nick. Get paid.) After a bit of bronco-bustin' involving alligator-cows (again emphasizing the series' desire to play as a Western), the Mandalorian ends up in a shootout, where he encounters a naive IG bounty hunter droid (voiced by actor/director Taika Waititi) pursuing the same target. Hoots and hollers from fans will surely greet the episode's big revelation of who (or what) the target is.

Rejecting Netflix's binge model, Disney Plus will parse out the remaining seven episodes between now and Christmastime, at which point you're supposed to report to your local multiplex for an actual Star Wars movie (The Rise of Skywalker, the ninth and allegedly last -- ha! -- of the Skywalker trilogies that began in 1977).

Looking past that, Disney Plus is impressive mainly for its archive, which by now includes a heaping helping of everything. The service's other original TV offerings are a bit weak so far, including Encore!, a reality series nominally hosted by Kristen Bell (The Good Place), wherein a different group of adults each week is offered the chance to restage the musical they starred in during high school 12 or 20 (or more) years ago.

It's a sweet idea until it's actually happening, and then it just seems creepy. Everyday Americans already have problems facing the future, often seeking solace in nostalgia ("Here's some money. Go see a Star War.")

Encore! drags its participants back into a presumably rosier past, where they once more try to belt out tunes from Annie or Beauty and the Beast. More Disney properties grafted onto Disney notions of life. The corporate hope here is that you'll subscribe and sing along.