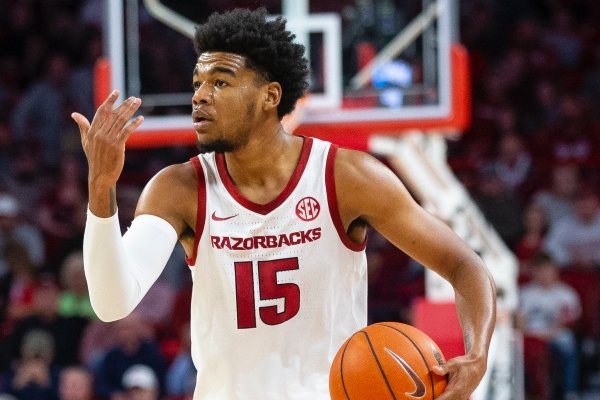 FAYETTEVILLE -- University of Arkansas Coach Eric Musselman said it will be a game-time decision whether Mason Jones plays against Austin Peay tonight in Walton Arena, but the 6-5 junior guard practiced Monday without going through contact drills.

Jones, who is averaging a team-high 18.5 points and 5.7 rebounds, didn't play in the Razorbacks' 66-60 victory over Northern Kentucky on Saturday because of a sprained joint in his right shoulder.

"He is feeling better," Musselman said on his radio show. "He and I had a long meeting just about where he is with his injury. We certainly don't want this early in the season for a player to play and then have a setback from an injury standpoint.

"On game day the other day, he really couldn't lift his arm above his shoulder. So obviously that would affect his shooting.

"Interesting [on Monday] when Mason and I met, he said, 'Coach, my shot's feeling good. Offense isn't a problem. The only thing I'm worried about with my shoulder is my defense.' I said, 'Aw, don't worry about that, because that's always a problem.' I'm just kidding. He's done a great job for us defensively. But as long as his arm is available to shoot, we'll put him in uniform and roll him out there."

Senior Jeantal Cylla, a 6-7 graduate transfer from North Carolina-Wilmington, started in Jones' place against Northern Kentucky, but he might not be in the lineup tonight if Jones isn't ready to go. Cylla played just five minutes against the Norse and didn't have any statistics. He's averaging 2.3 points and 2.3 rebounds in 13.7 minutes while playing all seven games.

Musselman said if Jones doesn't play, he is considering starting Cylla or 6-8 sophomore Reggie Chaney, who is averaging 4.5 points and 4.3 rebounds in 17.5 minutes off the bench in four games since serving a three-game suspension to start the season.

In 24 minutes off the bench against Northern Kentucky, Chaney had career-highs of 11 rebounds and 5 assists to go along with 6 points.

For the second time in three games, Arkansas will face one of the top 10 scorers nationally.

Austin Peay 6-5 junior Terry Taylor is 10th in scoring with an average of 23.3 points per game. Mike Devoe, a Georgia Tech sophomore guard, is averaging 23.4 points to rank eighth nationally.

Before the Yellow Jackets played the Razorbacks last week, Devoe was averaging 26.0 ppg to rank third, but he was held to 12 against Arkansas and shot 4 of 16 from the field.

Montana senior guard Sayeed Pridgett was averaging 23.6 ppg going into the Grizzlies' game at Arkansas, but he was held to 13 points on 5-of-12 shooting.

Northern Kentucky senior forward Dantez Walton scored 30 points against the Razorbacks, the most by an opponent since Colorado State's Printiss Nixon had 31 two years ago.

Four of Whitt's turnovers came against Montana. Before having one turnover against Northern Kentucky, Whitt went 158 minutes without a turnover.

Eric Musselman joked on his radio show about the Razorbacks hanging on for a 66-60 victory over Northern Kentucky after the Norse missed a three-pointer with 14 seconds left with Arkansas leading 62-60.

"We tried to entertain the fans the other night and keep it close," Musselman said. "Our guys have really played well. That's the one game maybe from a defensive standpoint we didn't play as good as we're capable of. When you're not defending at a high level and then shots aren't falling, you get a game like we had the other night.

"But I give our guys a ton of credit. When we need a stop, we get it. When need a basket, we kind of figure out a way. It's still young in the season, and we've got to continue to grow in a lot of aspects."

Eric Musselman said that during Monday's practice he planned to change some things defensively on how to guard the post and where the weakside help would come from against Austin Peay.

"Finally somebody looked at me and said, 'Coach, just leave it like it is,' " Musselman said on his radio show. "So I said, 'All right, you guys win. We're going to keep doing what we've been doing.'

"I was trying to tweak things and they said, 'Hey, we're good. Just leave it alone right now.' "

Austin Peay Coach Matt Figger was an Arkansas staff member for a few months in 2007 with coach John Pelphrey.

Figger worked for Pelphrey at South Alabama, and when Pelphrey was hired as Arkansas' coach in April of 2007, Figger followed him to Fayetteville as the Razorbacks' director of basketball operations from April to June.

Figger left Arkansas to become an assistant coach at Kansas State for Frank Martin. He then worked for Martin at South Carolina before being hired at Austin Peay.