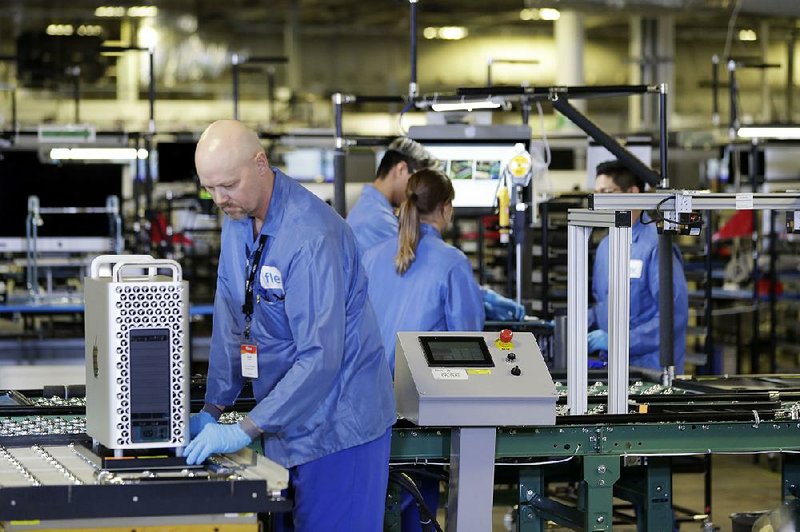 Workers assemble components last month at an Apple manufacturing plant in Austin, Texas. Factories in the U.S. have faced declining output since August, according to the Institute for Supply Management’s manufacturing index.

The Institute for Supply Management, an association of purchasing managers, said Monday that its manufacturing index dipped to 48.1 last month from 48.3 in October. The median forecast in a Bloomberg survey of economists called for an improvement to 49.2. Anything below 50 signals contraction.

U.S. factories have been on a losing streak since August.

New orders, production and hiring all dropped for the fourth-straight month. Export orders fell in November after rising in October.

President Donald Trump has imposed import taxes on foreign steel, aluminum and thousands of goods from China. Businesses have been reluctant to invest until they have a clearer idea on when and how the trade conflicts will end.

"This episode of manufacturing weakness feels similar to the 2015-16 period, when a strong dollar and a soft global economy led to a mini-recession in the factory sector rather than a full-blown economic downturn," Stephen Stanley, chief economist at Amherst Pierpont Securities, said in a note. "The overall tone, while weak, is one of slogging through the mud rather than falling off a cliff."

In addition, factory gauges in China and Germany suggested the worst may be over for the sector. A global purchasing managers index released Monday by JPMorgan and IHS Markit rose to 50.3 in November from 49.8, representing the first expansion since April, as orders reached their highest level in 2019. The gain was partly due to the U.S.

That's in line with a government report last week that business-equipment demand climbed in October by the most in nine months, which should help keep the U.S. expansion going amid solid, though tepid, consumer spending.

Still, the Institute for Supply Management's measure of factory orders declined in November after consecutive gains, and it matched the lowest readings of the expansion. While 20.5% of respondents -- the same as in October -- reported higher orders, the share indicating lower bookings increased by 2.7 percentage points, to 31.2%. These figures signal that the surprise jump in the government's October reading for capital goods orders and shipments may not be sustained.

The institute's survey indicated a deeper decline in factory employment, while the gauge of order backlogs dropped to its lowest level since January 2016. That helps explain why factories can operate with leaner staffing. The group's gauge of production, while rising for the first time since June, contracted for a fourth month.

The institute's measure of exports, after expanding in October for the first time in four months, fell back into contraction. The imports gauge also signaled a contraction, albeit a milder one than a month earlier.

The gauge of supplier deliveries was the only component above 50.

An index of prices paid fell for a sixth straight month, a sign that weak demand is holding down inflation.

A separate report from the Commerce Department on Monday gave another sign of possible economic weakness: Construction spending in the U.S. fell 0.8% in October from the previous month, compared with projections for a gain, and September's figure was revised to a decrease from an increase.

Private construction spending declined 1% in October, the report said. That follows a 1.1% decline in September.

Overall private residential construction dipped 0.9%, with multifamily projects falling 1.6% in October after a 2.1% decline in September.

Spending on single-family home construction increased 1.6%, helping to offset some of the losses elsewhere in the private construction category.

Lower mortgage rates and a healthy job market with rising wages have boosted home sales and the demand for new homes. The average rate on a fixed 30-year mortgage last week was 3.68%, a historically low number.

Over the past 12 months, increased government spending on construction has offset declines in private expenditures on building.

During the first 10 months of 2019, overall construction after adjusting for seasonal variations came in at an annual rate of $1.09 trillion in October, down 1.7% from a year ago.

Information for this article was contributed by Paul Wiseman of The Associated Press and by Vince Golle, Kristy Scheuble, Jeff Kearns and Alex Tanzi of Bloomberg News.