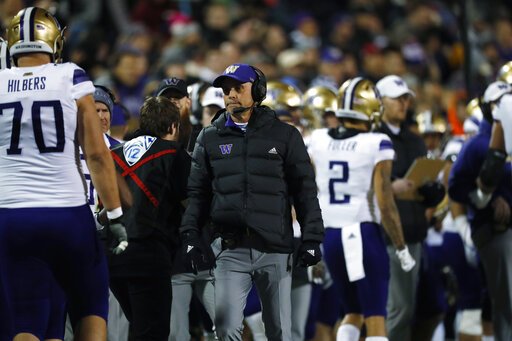 SEATTLE — Washington coach Chris Petersen has unexpectedly stepped down after six seasons at the school, with defensive coordinator Jimmy Lake promoted to over the program.

Petersen's decision was shocking coming off a season where the Huskies went 7-5 in the regular season and are bound for a sixth straight bowl game under his leadership.

The school said Petersen, 55, will transition into a "leadership advisory role" within the athletic department. Petersen was 146-38 combined during his time as the head coach at Boise State and Washington. In a statement, Petersen says he'll be a "Husky for life, but now is the right time for me to step away from my head coaching duties, and recharge."

"It has been a privilege and a professional dream fulfilled to be part of this world-class institution," Petersen said in a statement. "I will forever be grateful, honored and humbled to have had the opportunity to coach our fine young men on Montlake for these past six seasons. I thank each of them, as well as our coaches and administrative staff for the incredible commitment they've made to Husky football during my tenure."

Lake, 42, has turned down several other coaching opportunities in recent years and has seemed to be the successor to Petersen whenever he did decide to step away from coaching.

"I've been dreaming of this opportunity for as long as I can remember and I can't think of a better place to do it than in the world-class city of Seattle and at such a prestigious university with a rich football tradition," Lake said. "This wouldn't be possible without the mentorship of Coach Petersen and I would like to thank him for everything he has done for me, as well as Jen Cohen for entrusting me with this opportunity."