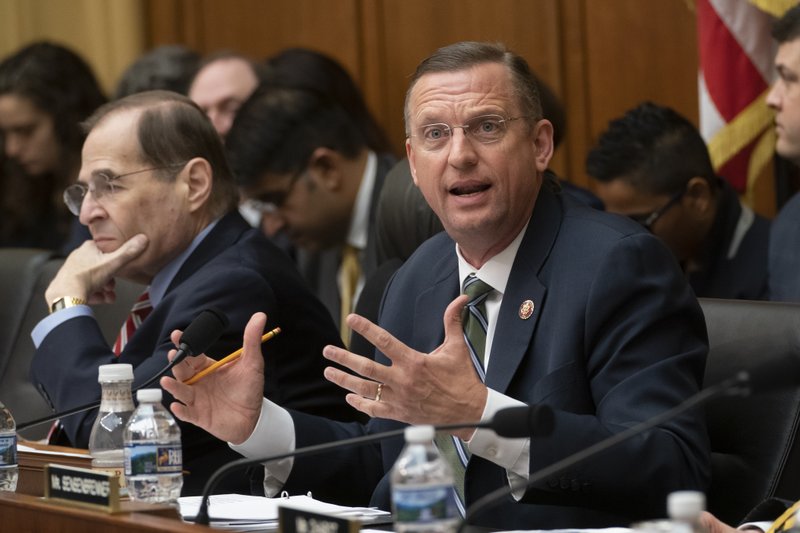 U.S. Rep. Doug Collins, R-Ga., the ranking Republican on the House Judiciary Committee, makes an objection to a resolution by Chairman Jerrold Nadler (left), D-N.Y., on Capitol Hill in Washington in this April file photo. - Photo by The Associated Press / J. Scott Applewhite

WASHINGTON -- The House impeachment inquiry enters a pivotal stage this week, with investigators planning a vote Tuesday to approve their report making the case for President Donald Trump's removal from office as he decides whether to mount a defense before a likely Senate trial.

A draft report will be available for members of the House Intelligence Committee to view in a secure location before their planned vote, which would send their findings to the House Judiciary Committee to consider charges.

Majority Democrats say the report will speak for itself in laying out possible charges of bribery or "high crimes and misdemeanors," the constitutional standard for impeachment. Republicans want Democratic Rep. Adam Schiff, chairman of the Intelligence Committee, to testify, though they have no power to compel him to do so, as they try to cast the Democratic-led inquiry as skewed against the Republican president.

"If he chooses not to [testify], then I really question his veracity in what he's putting in his report," Rep. Doug Collins of Georgia, the top Republican on the Judiciary Committee, said on Fox News Sunday.

"It's easy to hide behind a report," Collins added. "But it's going to be another thing to actually get up and have to answer questions."

Schiff has said "there's nothing for me to testify about," that he isn't a "fact" witness and that Republicans are only trying to "mollify the president, and that's not a good reason to try to call a member of Congress as a witness."

Coming after two weeks of public testimony, the findings of the House Intelligence Committee report are not yet publicly known. But the report is expected to mostly focus on whether Trump abused his office by withholding military aid approved by Congress as he pressed Ukrainian President Volodymyr Zelenskiy to launch investigations into Trump's political rivals.

Democrats also are expected to include an article on obstruction of Congress that outlines Trump's instructions to officials in his administration to defy subpoenas for documents or testimony.

Democrats are aiming for a final House vote by Christmas, which would set the stage for a likely Senate trial in January.

"I do believe that all evidence certainly will be included in that report so the Judiciary Committee can make the necessary decisions that they need to," said Rep. Val Demings, D-Fla., a member of both the Intelligence and Judiciary committees.

She said Democrats had not yet finalized witnesses for the upcoming Judiciary Committee hearings and were waiting to hear back from Trump on his plans to present a defense.

"If he has not done anything wrong, we're certainly anxious to hear his explanation of that," Demings said on ABC's This Week.

The Judiciary Committee's first hearing is Wednesday. It's expected to feature four legal experts who will examine questions of constitutional grounds as the committee decides whether to write articles of impeachment against Trump, and if so, what those articles will be.

Collins has called for a wider array of witnesses at the first hearing.

"To ensure fairness and restore integrity to the ongoing impeachment process, I request an expanded panel and a balanced composition of academic witnesses to opine on the subject matter at issue during the hearing," Collins wrote in a letter Saturday to the committee chairman, Rep. Jerrold Nadler, D-N.Y.

After weeks of deriding the process as a sham, Trump himself was silent over the weekend on whether he or his attorneys would participate in the Judiciary hearings. He had previously suggested that he might be willing to offer written testimony under certain conditions.

The Judiciary Committee gave the White House until Sunday evening to decide whether Trump or his attorneys would attend, but the White House responded ahead of the deadline that it didn't plan to participate. It was always unlikely that the president himself would attend on Wednesday, as Trump is scheduled to be at a summit with NATO allies outside London.

Trump must then decide by Friday whether he would take advantage of due process protections afforded to him under House rules adopted in October for follow-up hearings, including the right to request witness testimony and to cross-examine the witnesses called by the House.

"Why would they want to participate in just another rerun?" asked Collins, noting that the Judiciary Committee previously heard from constitutional scholars on impeachable offenses during special counsel Robert Mueller's Russia investigation.

"This is a complete American waste of time here," Collins said. "This is why this is a problematic exercise and simply a made-for-TV event coming on Wednesday."

Still, Republican Rep. Tom McClintock of California, a Judiciary Committee member, said he believes Trump would benefit if he presents his own defense.

"I think it would be to the president's advantage to have his attorneys there. That's his right," he said.

McClintock, also appearing on This Week, said he doesn't believe Trump did anything wrong in the July 25 call with Zelenskiy that is at the heart of the investigation.

"He didn't use the delicate language of diplomacy in that conversation, that's true. He also doesn't use the smarmy talk of politicians," McClintock said.

To McClintock, Trump was using "the blunt talk of a Manhattan businessman" and "was entirely within his constitutional authority" in his dealings with Ukraine's leader.

Rep. Zoe Lofgren, D-Calif., said on CNN's State of the Union that impeachment of Trump was "not a foregone conclusion."

"The question is should that misconduct result in impeachment," Lofgren said. "We need to sort through the severity -- the risk to the constitution, the risk to our national security that our president's actions pose. There is plenty of misconduct in the history of the United States among presidents but it's not all impeachable."

The reference by Nadler that Trump "again sought foreign interference" in an election indicates Democrats may look beyond the Ukraine controversy at the heart of the current debate to examine whether Trump encouraged Russia's interference in the 2016 election.

Rep. Andy Biggs, R-Ariz., predicted fireworks in the next phase of the inquiry.

"It's a bunch of brawlers sometimes on the Judiciary Committee, so it should get pretty hot under the collar," Biggs said on Fox News' Sunday Morning Futures. "It should be much more feisty than the Intel committee was."

By the end of this month, more than 500 Ukrainian prosecutors will be out of their jobs as part of sweeping professional reviews under Zelenskiy. Among the prosecutors heading for the exit: a key Kyiv contact for Rudy Giuliani.

The prosecutor purge is one of several corruption-busting efforts set in motion by Zelenskiy. But it puts into sharp relief Zelenskiy's twin challenges -- trying to balance his clean-government promises at home with his need to keep Trump from turning against him.

Trump's views of Ukraine -- and his demands to investigate the Biden family -- were largely shaped by his personal lawyer Giuliani. The theories and opinions that were passed to Giuliani came from some of the very officials whom Ukrainian activists claim are prime corruption culprits in their own system.

Now that Zelenskiy's push to root out corruption is underway, some of those Giuliani-linked officials are in the cross hairs.

A prosecutor named Kostiantyn Kulyk is one of the first.

Zelenskiy's new prosecutor general, Ruslan Ryaboshapka -- "100% my person," Zelenskiy told Trump in July -- last week gave a dismissal notice to Kulyk, a key player in the effort to provide Giuliani with political ammunition of dubious accuracy. Kulyk denies meeting Giuliani, but former associates say he prepared a seven-page dossier that his boss later passed along to the former New York mayor. Kulyk did not respond to a request for comment.

Kulyk was fired after not turning up for an examination that was part of a review process that will assess prosecutors across Ukraine.

At least 569 other prosecutors have also fallen short of the standards of the review and will be off the payroll by Dec. 31, the prosecutor general's office said.

Ryaboshapka has also started to audit how previous investigations were pursued against the owner of Burisma, the natural gas company that employed Joe Biden's son Hunter.

But anti-corruption activists say the audit is unlikely to produce any information that would lead to evidence of wrongdoing on the part of Biden, since no evidence has emerged.

Information for this article was contributed by Hope Yen of The Associated Press; by Michael Birnbaum, David L. Stern, Dalton Bennett and Natalie Gryvnyak of The Washington Post; and by Rich Miller, Ari Natter, Billy House and Hailey Waller of Bloomberg News.