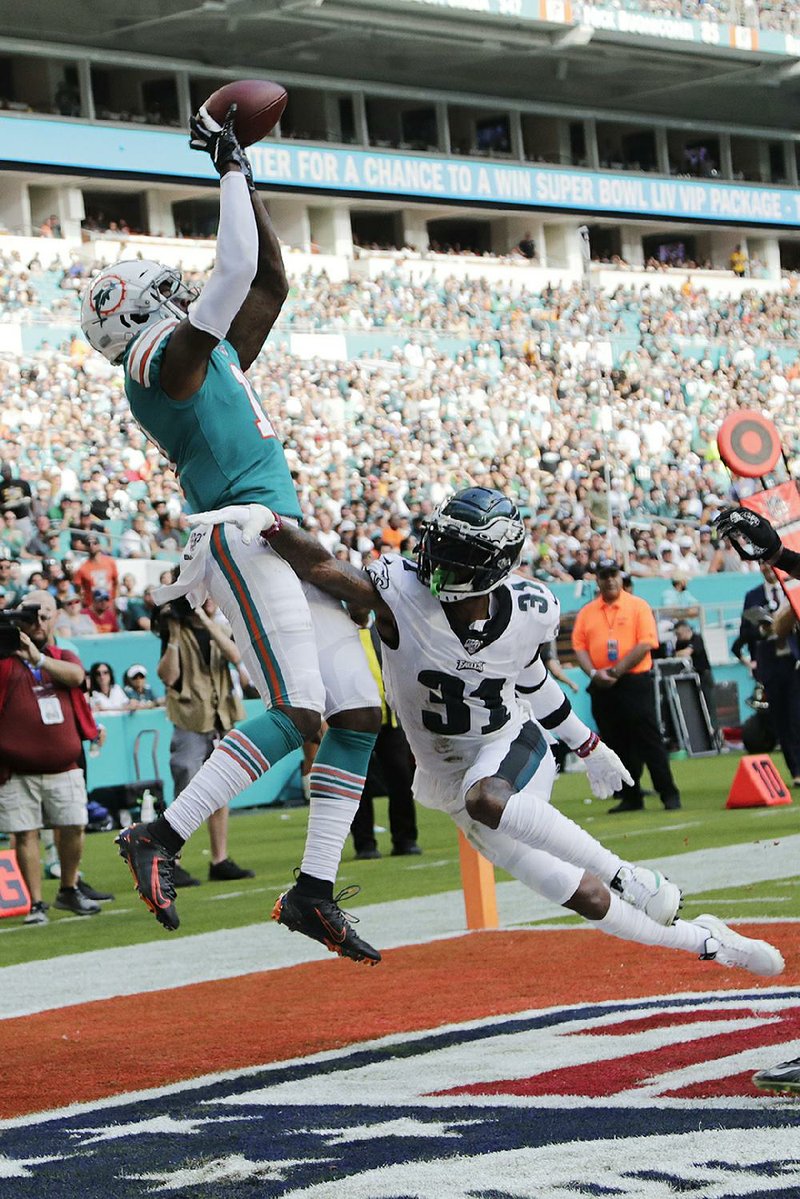 Miami Dolphins wide receiver DeVante Parker catches a pass for a touchdown as Philadelphia Eagles cornerback Jalen Mills defends during the second half Sunday in Miami Gardens, Fla. Parker finished with 7 receptions for a career-high 159 yards and 2 scores as Miami won 37-31.

The unlikely duo helped the Miami Dolphins overcome a 14-point deficit in the second half to beat the slumping Philadelphia Eagles 37-31 on Sunday.

Miami (3-9) rallied with three touchdowns in less than 13 minutes, a remarkable achievement for one of the NFL's least formidable offenses.

"This team knows how to deal with adversity," said rookie Coach Brian Flores, whose Dolphins have showed a lot more life since starting the season 0-7. "We're just going to keep swinging."

Miami won for the third time in its past five games, a perhaps costly turnaround for a team that will be shopping for a franchise quarterback in the 2020 draft. The victory likely took the Dolphins out of the running for the No. 1 pick.

The result definitely was costly to the Eagles (5-7), who lost their third game in a row and missed a chance to pull into a tie with Dallas atop the NFC East.

Philadelphia Coach Doug Pederson acknowledged that his team is now a long-shot for a playoff berth, and that he'll need to combat doubt in the locker room.

"There will be a little bit of that," he said. "We have to guard against that. We're still a good team."

Trickery helped the Dolphins, who twice opted not to kick on fourth down and instead threw for a touchdown. The second such gamble by Flores paid off when Miami shifted out of field goal formation before holder Matt Haack threw an underhand 1-yard pass to Sanders.

Philadelphia was expecting a field goal try when Haack stood and instead took a Shotgun snap, with five teammates flanked far to the left and four far to the right.

Haack rolled left before flipping a pass to Sanders, who was part of the group on the left before slipping into the end zone uncovered.

"It's exactly what we planned for," Haack said. "That was pretty cool."

"However it gets there," the coach said.

Flores opted not to punt on fourth and 4 in the first quarter, and instead Parker scored on a 43-yard catch and run, toe-tapping along the sideline to the end zone.

The 6-3 Parker finished with 7 receptions for a career-high 159 yards and 2 scores.

"Hats off to DeVante for the display he put on," quarterback Ryan Fitzpatrick said. "That was special. When you're throwing to a guy who is making plays like that, it's easy to play quarterback."

Parker's final leaping grab was a 34-yard catch to set up the score that put the Dolphins ahead to stay with 11 minutes left.

Tight end Mike Gesicki also got into the act, soaring for a 14-yard touchdown catch.

Fitzpatrick's sure-handed targets helped him finish 27 for 39 for 365 yards and 3 touchdowns as Miami achieved season-highs in points and yards (408).

Sanders returned to his usual role to kick a 51-yard field goal with 3:37 left that made the score 37-28. The Eagles kicked a field goal with 1:51 left and got the ball back, but Carson Wentz's desperation pass from midfield on the final play was intercepted in the end zone.

Wentz threw for three touchdowns to help build a 28-14 lead, but the Eagles were kept out of the end zone over the final 26 minutes.

That quieted the many thousands of green-clad spectators rooting for the visitors, who outnumbered Dolphins fans.

"The fact that they had more fans than us kind of makes me mad," Parker said.