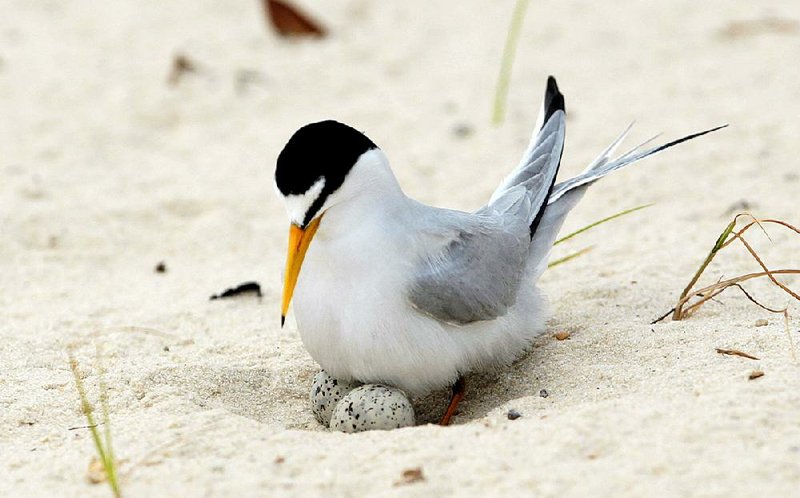 A least tern checks her eggs in May 2010 on a beach in Gulfport, Miss. On Wednesday the U.S. Fish and Wildlife Service proposed taking the least tern off the endangered species list.

A bird that dwells in Arkansas, the Missouri River and the lower Mississippi River no longer needs to be considered endangered, according to a U.S. Fish and Wildlife Service proposal.

Research shows the population of least tern has rebounded from a loss of habitat related to river damming.

In Arkansas, researchers at Arkansas Tech University have been surveying the bird's population since about 2001 and recommending to the U.S. Army Corps of Engineers ways to help the bird. The Corps has paid the university for the surveying and research most years since then.

"That means they don't need to be successful in reproduction every year but need to be consistent over the years," Nupp said. "That was a very interesting and unique thing about their biology compared to other birds."

Least terns breed throughout their lives and nest in areas with less vegetation so that they can spot any predators approaching.

The least tern -- the smallest of the terns -- was first listed as endangered in 1985, according to the Fish and Wildlife Service. Its habitat had been reduced because of the damming of rivers, which increased their flow and water levels and reduced the amount of sand that the tern used for nesting.

One recommendation from the Arkansas Tech researchers has been for the Corps to build habitats for the least tern, namely islands and sandbars. Anecdotally, the habitat seems to have worked in renewing the population, but Nupp said more study is needed.

The Fish and Wildlife Service recommended taking the least tern off the endangered list because of the population growth, the range increase and the bird's ability to withstand climate change so far. The agency also cited better management practices related to their habitats and increased regulatory protections.

Regulatory protections include the 2001 Responsibilities of Federal Agencies to Protect Migratory Birds presidential executive order and the Civil Works Ecosystem Restoration Policy of 1999 that "identifies ecosystem restoration as one of the primary missions" of the Corps' Civil Works program.

The nonprofit Center for Biological Diversity, which typically petitions for more species to be protected, issued a news release celebrating the proposal and credited the Endangered Species Act.

"This is another example of how well this landmark law works to save wildlife that's at risk of vanishing," Noah Greenwald, endangered-species director at the center, said in the release. "Protecting these pretty birds has also helped us move toward managing rivers to more closely mimic natural flows, benefiting many other species and river health."

Dan Scheiman, bird conservation director for Audubon Arkansas, said he was "cautiously optimistic" about the delisting. He's encouraged by the improved numbers for the least tern but noted that interventions supported by federal dollars may disappear for a lack of funding if the designation changes.

"The threats the species faces on the Arkansas River have not changed," Scheiman said. "There are still lots of dams. There's still human encroachment on the islands. Predators still get to their islands."

If the delisting is approved, the bird would be monitored for five years afterward, said Jay Townsend, a spokesman for the Corps' Little Rock District.

If intervention efforts can no longer be supported by federal grant money, the Corps still plans to create habitat when and where possible for the least tern, he said. Dredging of the Arkansas River navigation channel creates material that needs to be placed somewhere, he said, and it can be used to build islands and sandbars for least terns.

"We always have the need to remove sand and silt form the navigation channel, always have to place it somewhere, and if that's beneficial to the least terns we will continue to do so," he said.

President Donald Trump's administration overhauled the Endangered Species Act earlier this year, including by adding an economic analysis to the process of determining whether a species should be protected. The change also reduces the protections for species considered "threatened." The "threatened" designation is less dire than "endangered."