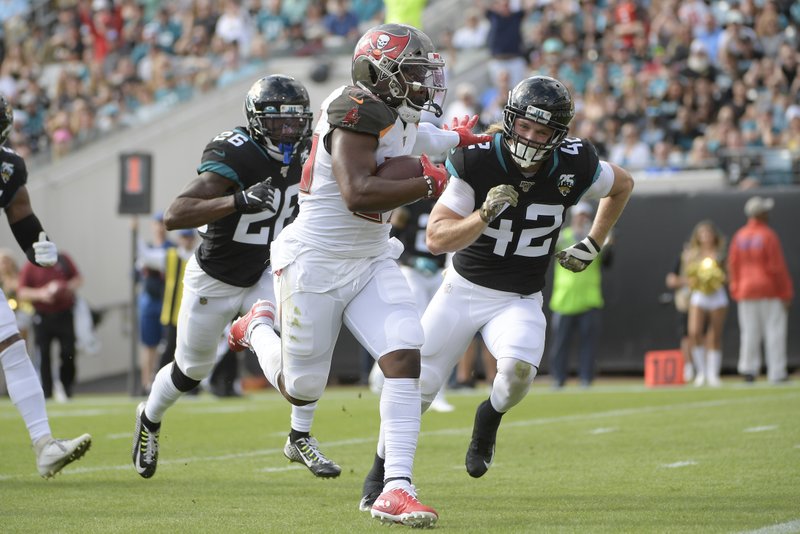 JACKSONVILLE, Fla. -- Nick Foles, Doug Marrone and the Jacksonville Jaguars reached a new low in their first home game in more than a month.

Foles ended his first three drives with turnovers that Tampa Bay turned into touchdowns, costly mistakes that propelled the Buccaneers to a victory over the Jaguars.

It was Jacksonville's fourth consecutive loss by at least 17 points. Marrone, meanwhile, has to decide what to do at quarterback. He benched Foles at halftime, switching back to rookie Gardner Minshew.

Minshew rallied the Jags (4-8) and had a chance to make it a seven-point game in the fourth quarter. But his hot pass slipped through Dede Westbrook's hands and into Sean Murphy-Bunting's arms for Jacksonville's fourth turnover of the day.

Foles completed 7 of 14 passes for 93 yards with 2 fumbles and an interception. He also was sacked three times.

The Bucs (5-7) capitalized on each of Foles' miscues.

Rookie linebacker Devin White stepped in front of Westbrook and intercepted a pass on Jacksonville's opening drive. Peyton Barber took advantage of the NFL's worst rushing defense in November and scored the first of his two touchdowns.

PITTSBURGH -- No fighting. No helmet swinging. Barely any trash talking.

Devlin Hodges threw for 212 yards with a touchdown and an interception in his second career start. Rookie Benny Snell ran for 63 yards and his first NFL touchdown, and the banged-up Pittsburgh Steelers (7-5) exacted revenge for their whipping at the hands of the Cleveland Browns (5-7) two weeks ago.

Pittsburgh (7-5) boosted its postseason chances by rallying from 10 points down thanks in large part to Hodges, a rookie undrafted free agent. He was aided by the emergence of wide receiver James Washington, who caught four passes for 111 yards and a juggling 30-yard score late in the first half.

Baker Mayfield completed 18 of 32 passes for 196 yards with a touchdown and an interception for the Browns. He played the entire second half with his right hand in a protective glove after smacking it against the face mask of Pittsburgh linebacker Bud Dupree.

Nick Chubb ran for 58 yards and Kareem Hunt added 65 total yards and a touchdown reception. But Cleveland failed to pull even with the Steelers in the standings and sweep the season series from its rival for the first time in 31 years.

The Packers sent the Giants to their eighth consecutive loss, their worst skid since 2004.

Rodgers finished 21-of-33 passing for 243 yards with no interceptions on a slippery, snowy day at MetLife Stadium. Rodgers hit Davante Adams on touchdown passes of 8 and 17 yards, found a wide-open Allen Lazard for 37 yards, and capped the performance with a 1-yarder to Marcedes Lewis.

Jones, who had not thrown an interception in the past two games, finished 20 of 37 for 240 yards, including an 18-yard touchdown pass to Sterling Shepard. Aldrick Rosas added field goals of 27 and 45 yards for New York (2-10), which has a 7-21 mark since Pat Shurmur took over last season.

A light snow started falling before game time and it quickly covered the field, forcing work crews to shovel the yardage lines during breaks.

The Packers scored the first three times they had the ball, with the first two drives ending on touchdown passes by Rodgers. The first covered 8 yards to Adams and the second was the strike to Lazard on a crossing pattern.

CINCINNATI -- Andy Dalton returned from his three-week exile and got a long-awaited victory for the coach who benched him, throwing a touchdown pass during a victory over the New York Jets that ended the longest losing streak ever for the Cincinnati Bengals.

The Bengals (1-11) had lost 13 in a row since the end of last season, with newcomer Zac Taylor waiting until December to get his first head coaching win. Taylor benched Dalton after the eighth loss, deciding to see whether Ryan Finley fit into the team's long-term plans. With the rookie struggling and the season careening toward 0-16, Taylor reversed course and went back to Dalton.

The Jets (4-8) had their three-game winning streak snapped, unable to extend their high-scoring momentum behind Sam Darnold. The Jets also made dubious NFL history, becoming the first team to lose to two teams who were 0-7 or worse in the same season. New York lost to Miami, which was 0-7 at the time, on Nov. 3.

Dalton put Cincinnati ahead to stay with a 17-yard pass to Tyler Boyd that made him the Bengals' career leader in touchdown passes, moving ahead of Ken Anderson with 198. He also passed Anderson for the franchise's career completion mark.

The Titans (7-5) snapped a three-game losing streak in the series, winning for only the third time in the past 17 meetings. It also allowed Tennessee to leapfrog the Colts in the AFC South.

Adam Vinatieri missed three field goals for Indy (6-6), with two being blocked including the decisive kick that Dane Cruikshank got his hand on. Vinatieri has missed 14 kicks this season -- eight field goals and six extra points.

Jacoby Brissett was picked off twice, with the first resulting in a 31-yard field goal that tied the score at 17-17 late in the third quarter, and the second resulting in Ryan Tannehill's 40-yard TD pass to Kalif Raymond with 3:02 left that sealed the victory.

Indy also lost a fumble deep in Tennessee territory with two minutes left when the Titans won a challenge.

Derrick Henry carried 26 times for 149 yards and 1 touchdown, becoming the first runner to top the 100-yard mark against Indy in 30 games. Tannehill was 17 of 22 for 182 yards and 2 TD passes as he improved to 5-1 as Tennessee's starter.

CHARLOTTE, N.C. -- Derrius Guice ran for 129 yards and two touchdowns, and the Washington Redskins made a late goal-line stand to secure a victory over the Carolina Panthers.

Adrian Peterson added 99 yards and a score as the Redskins (3-9) piled up 248 yards on the ground and scored their most points this season.

The Redskins spotted the Panthers a 14-0 lead after quarterback Kyle Allen opened the game 8-of-8 passing for 106 yards with touchdown passes to receivers Curtis Samuel and D.J. Moore on Carolina's first two possessions.

The Redskins upped the pressure on Allen, forcing eight punts and an interception on the next nine possessions. Washington limited the Panthers to 65 yards on those nine drives and neutralized Christian McCaffrey, holding the NFL's leader in yards from scrimmage to 102 total yards.

The Panthers perfectly executed an onside kick with Jermaine Carter recovering at the Carolina 48.

Allen moved the Panthers to the 1, but Washington stopped Carolina on four consecutive downs with Chris Odom (Arkansas State) sacking Allen after a 23-yard loss and Nate Orchard recovering the loose ball.

Goff picked apart the Cardinals' defense, which was the NFL's worst against the pass coming into the game. He had thrown no touchdowns passes and five interceptions over his previous three games, but responded with 323 yards passing in the first half as the Rams (7-5) built a 20-0 lead.

Los Angeles finished with 549 yards while Arizona had just 198, and a big chunk of those came in the fourth quarter when the game was long decided.

The Cardinals (3-8-1) had two weeks to rest and prepare for the Rams after coming off their bye week but looked rusty instead of refreshed. They've lost five consecutive games.

Rookie Kyler Murray completed 19 of 34 passes for 163 yards. He threw a pick-six midway through the third quarter when Taylor Rapp grabbed an interception and ran 31 yards for a 34-0 lead.

DENVER -- Brandon McManus' 53-yard field goal as time expired, set up by a long pass interference call, capped a furious final 14 seconds and gave the Broncos a victory over the Los Angeles Chargers.

Rookie quarterback Drew Lock's debut victory for Denver came a month after Brandon Allen (Fayetteville, Arkansas Razorbacks) beat Cleveland. It made the Broncos the first team in league history to have two quarterbacks start and win their NFL debuts in the same season.

The winner by McManus, who stormed off the field just before halftime when Coach Vic Fangio changed his mind about letting him attempt a record 65-yard field goal, was set up by a 38-yard pass interference call on Chargers cornerback Casey Hayward.

Diontae Spencer returned the kickoff 26 yards to the Denver 28 after the Chargers tied the game at 20-20 on Michael Badgley's 46-yard field goal with 14 seconds remaining. With nine seconds left, Lock threw deep down the right sideline to Courtland Sutton, who caught two first-quarter touchdown passes.

Sutton collided with Hayward and the yellow flag came out. The Chargers argued vehemently about the call, which gave the Broncos the ball at the Chargers' 35 with three seconds remaining.

The Chargers (4-8) continued jawing with both the Broncos (4-8) and the officiating crew as the Broncos stormed the field after McManus' field goal.