• Brad Paisley is perfectly comfortable being the butt of jokes. In his new variety special, Brad Paisley Thinks He's Special, airing Tuesday on ABC, the country star allows himself to be the punchline in a number of skits with celeb pals including Peyton Manning, Carrie Underwood, the Jonas Brothers and Tim McGraw. "It's the way I got everybody to do it. I said, 'You're here to roast me,'" he says. "When we were talking on the phone I said, 'Guys, no misconception here. You need to realize this exists for me to be laughed at and I'm good with that.' So they were like, 'We're in.'" The award-winning musician has co-hosted the Country Music Association Awards 11 times, had a comedy special on Netflix and stars in a series of Nationwide insurance commercials with Manning. Implementing ideas and turning them into a reality is a thrill for the 47-year-old. "I love nothing more than creating and sort of coming up with an idea and seeing it through in this career. Whether that's a song that you write, and it becomes a single and a hit and a video and a thing you do on tour and leads to everything else or it's a television show. There's nothing more satisfying than saying here's the finish line and I think if we do all these things right, we can get there." 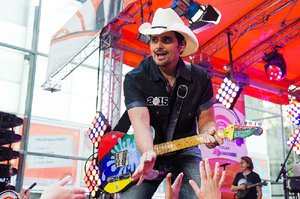 • Pope Francis on Sunday hailed Nativity scenes as "simple and admirable" signs of Christian faith and encouraged their placement in workplaces, schools and town squares, as he bolstered a Christmas tradition that has at times triggered bitter legal battles in the United States. Francis visited a hill town, Greccio, where St. Francis of Assisi reenacted the first creche scene, using living persons instead of statues, likely in 1223. In Greccio, in the countryside outside Rome, Francis signed a document, known as an apostolic letter, stressing the importance of creche scenes to popular faith. "With this letter, I wish to encourage the beautiful family tradition of preparing the Nativity scene in the days before Christmas, but also the custom of setting it up in the workplace, in schools, hospitals, prisons and town squares," the pope wrote in the letter, which was read aloud to people gathered inside a small, stone church in Greccio. Earlier in the day, while at the Vatican, Francis described a creche scene as "a simple and admirable sign of the Christian faith." Nativity scenes have triggered legal battles in the U.S. when erected on public property over the question of the separation of church and state. Controversies have made their way to the U.S. Supreme Court. In one recent case, a small city in the U.S. state of Delaware ordered a Catholic church to remove a Nativity scene displayed on city property. 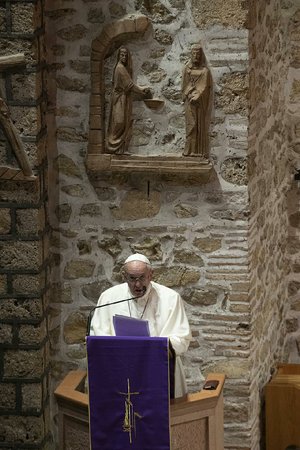