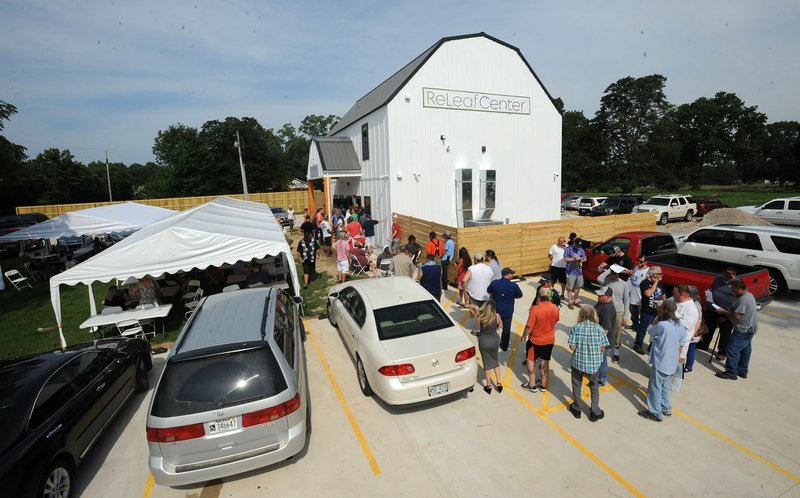 File Photo/NWA Democrat-Gazette/ANDY SHUPE A long line forms Aug. 7 during the opening for The ReLeaf Center, a medical marijuana dispensary at 9400 E. McNelly Road in Bentonville, the first dispensary to open in Northwest Arkansas.

Medical marijuana dispensaries will have until the middle of next year to open to the public before the Arkansas Medical Marijuana Commission will consider revoking inactive licenses.

That means the 21 retailers still not open will get several more months than expected before they are threatened with enforcement action from regulators.

Arkansas Alcoholic Beverage Control officials, who regulate the state's budding cannabis industry, have said in recent months that they could begin taking actions against inoperable dispensaries at the end of January. But the necessary rule is still being drafted, meaning it won't make it through the monthslong promulgation process in time.

However, medical marijuana commissioners have expressed frustration about the pace at which the state's 32 dispensaries have opened since being licensed in January. Officials have said that licenses may not be reissued when they're up for renewal in June.

It's been three years since Arkansans voted to legalize marijuana for medicinal use by approving Amendment 98 to the Arkansas Constitution.

"Amendment 98 did not include a date by which dispensaries must be operational," Alcoholic Beverage Control spokesman Scott Hardin said in an email last week. "Due to this, the pace at which these dispensaries are developed and open for business is totally at the discretion of owners. ABC Enforcement agents continually check in with owners, requesting status updates while offering support and a reminder that the company was licensed to serve patients. ABC will send a letter to each dispensary in early January explaining the process of renewing the license while also requesting an updated time frame for opening."

The state's first dispensary opened in early May, and 11 are now operating. Since May, they have sold more than $21.35 million of cannabis and cannabis products.

Large, populated portions of the state remain without a dispensary. Even the state's largest city, Little Rock, has yet to have either of its two dispensaries opened to the public.

Herbology, at 7303 Kanis Road, anticipated a Nov. 7 opening date, but it hasn't been cleared by state regulators to open. Neither has Natural State Wellness Dispensary, which is at 900 S. Rodney Parham Road.

Asked when the dispensary would open and what hurdles have prevented its opening, Talley Wettlaufer, Herbology's vice president of retail, said through a spokesman: "Like any construction project and new endeavor, we have encountered a few setbacks, but are close to having them all resolved. We look forward to opening and serving the Little Rock community in 2020."

Natural State Wellness Dispensary could not be reached for comment, but it told regulators earlier this year that it expected to open in November or December.

Once open, Herbology will offer patients more than 20 strains with varying chemical compositions, Wettlaufer said. Its flower will sell at several price points, starting at $15 per gram.

After Amendment 98 was approved, the Arkansas Medical Marijuana Commission took nearly a year and a half to evaluate the 95 applications for five medical marijuana growing licenses. A legal challenge to the licensing process prolonged that process by another four months.

David Couch, the Little Rock attorney who drafted and sponsored Amendment 98 in 2016, said that far more dispensaries should be open by now.

"It's totally unreasonable," Couch said. "I think a lot of these unopened facilities are managed by out-of-state entities who believe that it's not economically in their best interest to open a facility now, so they're just going to wait. I think that's wrong."

Alex Gray, an attorney who represents several dispensaries and one cultivation facility, said the longer-than-expected licensing process put a damper on the program. Additionally, he noted, there was a limited amount of product as the first growing facilities got up and running.

"Most of these things have started to work themselves out," Gray said. "I think what you'll see is 80-90% of dispensaries operating by April of next year. All concerns should be alleviated here in the next few months."

Gray said opening a medical marijuana business takes time, adding he thought that if most dispensaries were opened in the first half of 2020, then that would be a "pretty good time frame" from when the licenses were issued.

Cannabis companies, Gray said, have been weighing a number of factors, including the patient count, product supply and locations of other dispensaries. Additionally, many of the companies have had their circumstances change since first applying for marijuana business licenses two years ago.

"From the outside looking in, people don't understand a lot of the facts that go into a business," he said. "There may be frustration that not enough dispensaries are open. Given just the timeline and what's required to be invested and the numerous business decisions that have to be made to start a multimillion-dollar industry, these are decisions that have to be made thoughtfully and deliberately."

The chief complaint of patients has been the high prices of cannabis purchased from state-regulated dispensaries. At $15 a gram, legally purchased cannabis is several times more expensive than marijuana purchased illegally, though it has the advantage of having been lab-tested and grown in a strictly controlled and regulated environment.

The Arkansas Department of Health has approved more than 29,350 patients and caregivers for medical marijuana ID cards. The cards are available for patients who have been certified by a doctor to suffer from one of 18 qualifying conditions.