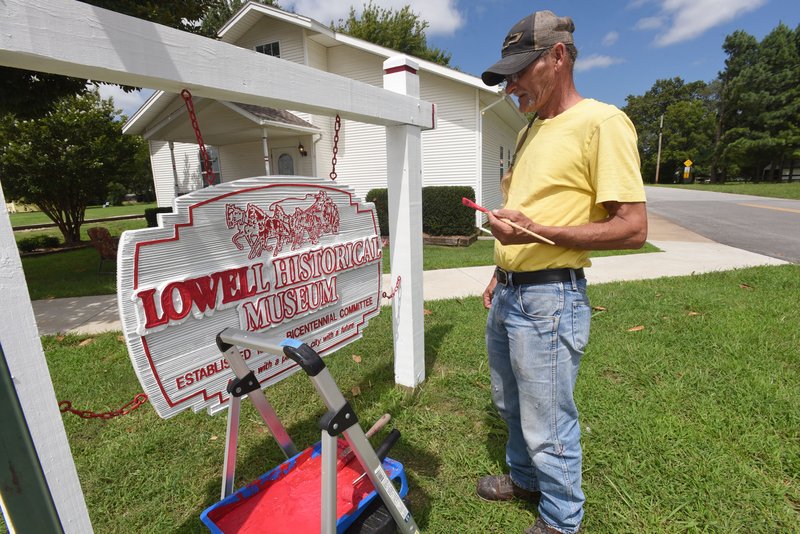 NWA Democrat-Gazette/FLIP PUTTHOFF BRIGHTER SIGN Roy Baker of Rogers paints the entrance sign Wednesday Aug. 24 2017 at the Lowell Historical Museum, 304 Jackson Place, in downtown Lowell. The new red and white color should be more visible to passers by, Baker said. The museum displays hundreds of items from Lowell's history, plus old-time kitchen ware, musical instruments, documents and military items. The museum is hosting a back to school bash with games, food and prizes at 6 p.m. today at Ward Nail Park. Lowell Historical Museum is open Monday through Thursday from 9 a.m. to 2 p.m., and Saturday from 10 a.m. to 4 p.m. It is closed Fridays.

LOWELL -- The city's budget for next year doesn't include any permanent staff to run the Lowell Historical Museum, which temporarily closed this year after an inspection found maintenance problems.

The museum on West Main Street is open from 10 a.m. to 2 p.m. the first and third Saturday of each month, said Melanie Houston, Moore's assistant.

"We've done a little bit of work," Moore said. "We haven't done all the work that I would like."

The museum had standing water in it when it closed. The city did enough drainage repair to make it safe for visitors and volunteers, Moore said. The city budgeted $7,000 for the museum's 2020 operation and maintenance. In 2018, the city spent $45,000, including $17,000 for staff salaries and benefits.

Liz Estes, city clerk, resigned from her part-time position as museum director in January after the museum closed.

City and community leaders hosted a meeting in July to hear from residents about the direction they'd like to see the museum go. They discussed options including permanently closing the museum, repairing the building, buying a building or constructing a new museum.

The museum will continue to operate with volunteer staff for the foreseeable future, Moore said.

The city plans to spend $75,000 on three police vehicles, $15,000 to replace a heating and air conditioning unit at City Hall and $10,000 to refurbish a machine the Fire Department uses to fill air tanks when fighting fires, Hudlow said.