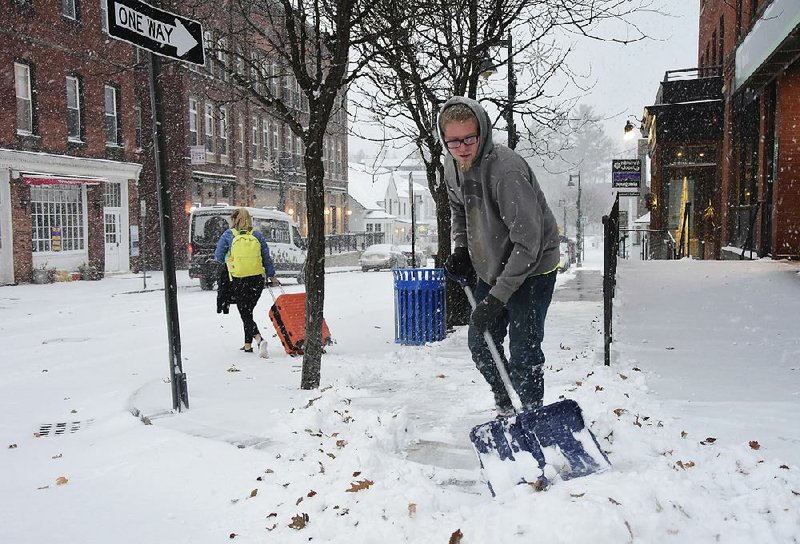 Landscaping employee Zach Lusignan shovels snow Sunday from a street in Williamstown, Mass. Parts of the Northeast were expecting more than a foot of snow from a deadly winter storm moving into the region.

NEW YORK -- Hundreds of flights were canceled and thousands delayed for travelers heading home after the Thanksgiving holiday as a deadly winter storm moved to the Northeast on Sunday, packing one last punch of snow and ice.

The National Weather Service predicted more than a foot of snow in swaths of upstate New York and New England, as well as ice accumulations in parts of Pennsylvania.

The same storm has been pummeling the U.S. for days as it moves cross country, dumping heavy snow from parts of California to the northern Midwest and inundating other areas with rain.

It has been blamed for several deaths.

Nine members of an Arizona family were in an oversized military-style truck when they got stuck in a raging creek Friday.

Four children and two adults got out and were rescued by helicopter, but three children stayed in the truck and it was later swept away.

Rescuers with helicopters, drones, boats, dogs and an army of volunteers searched Sunday for a 6-year-old girl missing since Friday. Her brother and cousin, both 5, were found dead on Saturday.

"We want to bring her home safely to her family," said Lt. Virgil Dodd of the Gila County sheriff's office. "She needs to come home today, and we're going to do that today."

Willa's parents, Daniel and Lacey Rawlings, both escaped from the truck but their son, Colby Rawlings, and niece, Austin Rawlings, were not in the vehicle when it was pulled from the creek the next day. Their bodies were found about 600 to 1,000 yards from the failed crossing.

The creek crossing was marked as closed with barricades and signs, authorities said.

Two boys, ages 5 and 8, died Saturday near Patton, Mo., when the vehicle they were riding in was swept off flooded roads.

A 48-year-old man died in a separate incident near Sedgewickville, Mo., and a storm-related death was reported in South Dakota.

Road crews were able to reopen all of Interstate 25 and most of I-80 in Wyoming early Sunday after strong winds abated. Major interstates in Colorado were also reopened.

The city of Duluth, Minn., was blanketed with 21.7 inches of snow as of noon Sunday. City officials said streets were impassible and residents should stay inside.

Farther south, precipitation was in the form of rain and thunderstorms.

While motorists on the bulk of roadways in the rest of the Midwest were traveling at or near normal speeds as of Sunday morning, there were several slowdowns in northern Michigan, including along Interstate 75. Heavy snow was just exiting the region after more than a half-foot had fallen.

As the storm shifted east, flight delays and cancellations continued to pile up -- disrupting travelers heading home after Thanksgiving.

As of 7:30 p.m., there were more than 800 Sunday flights canceled in the U.S., compared with about 400 on Saturday, according to flight tracking site FlightAware. Nearly 6,000 U.S. flights were delayed.

Newark, N.J., had 33 flight cancellations and some inbound planes were being delayed by an average of more than 2½ hours because of the weather.

There were also dozens of flight delays in Chicago and Minneapolis.

In Denver, 100 flights were canceled Saturday because of high winds.

The delays were even longer across the country at San Francisco International Airport, where high winds caused arrivals and departures to stall by more than four hours on average. The Bay Area is under a high wind warning through the early hours of today.

Several major airlines, including Delta and American Airlines, were waiving flight-change fees for passengers likely to be stranded by the storms.

Flight disruptions are likely to continue in New England today into early Tuesday, especially from Philadelphia northward to Boston, where a mix of rain and snow, along with strong winds, is anticipated.

More than 5 inches of snow had fallen Sunday by afternoon in Minneapolis. Minneapolis-St. Paul International Airport is a major hub for Delta Air Lines.

In the mountain communities northeast of Los Angeles, nearly 9,000 utility customers were without power because of the storm.

Forecasters said a new storm was expected to bring several feet of mountain snow, rain and gusty winds to California through the weekend. Another system was forecast to develop Sunday in the mid-Atlantic, moving into a nor'easter by today.

Delays mounted along the West Coast, as the area was hit by a significant storm system known as an "atmospheric river" because of the amount of water vapor it contains.

That storm caused high winds of up to 50 mph throughout the Bay Area, slowing air traffic into airports in San Francisco, Oakland and San Jose. Rain has fallen intermittently in San Francisco, but the heaviest showers are concentrated south, near Monterey. The storm is also dumping heavy snow in the northern Sierras.

In the Northeast, heavy snow, mixed precipitation and strong winds were expected to develop in many areas. Freezing rain was already falling in parts of Pennsylvania on Sunday, making roads hazardous, and the stage is set for a burdensome morning commute today for many from New York to Portland, Maine.

Wintry weather was settling over the Appalachians on Sunday morning behind the storm's cold front, where winter storm warnings peppered the high terrain of eastern Tennessee and western North Carolina.

For parts of Pennsylvania and West Virginia, though, the story was one of freezing rain -- enough to create a treacherous glaze that could coat outdoor surfaces. With up to a quarter-inch of icing expected, the National Weather Service warned of "nearly impossible" travel conditions and sporadic power failures. The bulk of it was forecast to wrap up for central and western Pennsylvania by midafternoon Sunday, though road travel could remain difficult to impossible for hours afterward.

As the storm evolves, it will bring snow to a small part of Pennsylvania, specifically the northeast, beginning late Sunday and extending through today and possibly into early Tuesday. There, amounts could build to as much as 9 or 10 inches as one nears the New York border.

Snowfall totals of a foot-plus are possible in eastern New York state east of Interstate 81 by the time the storm ends. Pockets of up to 18 inches may punctuate some spots in the Catskills and Hudson Valley.

As Sunday's storm approached, hardy New Englanders made sure to prepared, even if they weren't really that worried.

Some communities, including Waterbury, Conn., have instituted street parking bans.

Much of interior Massachusetts could get up to a foot of snow. Boston is projected to get between 3 and 6 inches of snow, but Mayor Marty Walsh said schools will be open today.

Newman, who braved the forecast to take his son to a college basketball game in Hartford, said it took him about five hours to get new tires Saturday because it seemed everyone else was doing the same thing.

"I think there's some extra hype on this one because it's the first one of the year," said Justin Bette of Southbury, Conn. "We've been around for quite a while, we think we'll be OK." 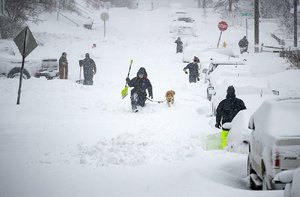 Photo by AP/Star Tribune/ALEX KORMANN
Neighbors work together Sunday to clear as much snow as possible from their street in Duluth, Minn. The city had received 21.7 inches of snow by noon Sunday. 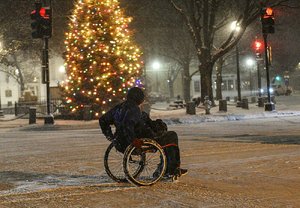 Photo by AP/The Brattleboro Reformer/KRISTOPHER RADDER
Stephen Willard pushes his wheelchair through the snow Sunday as he heads to his apartment in Keene, N.H.