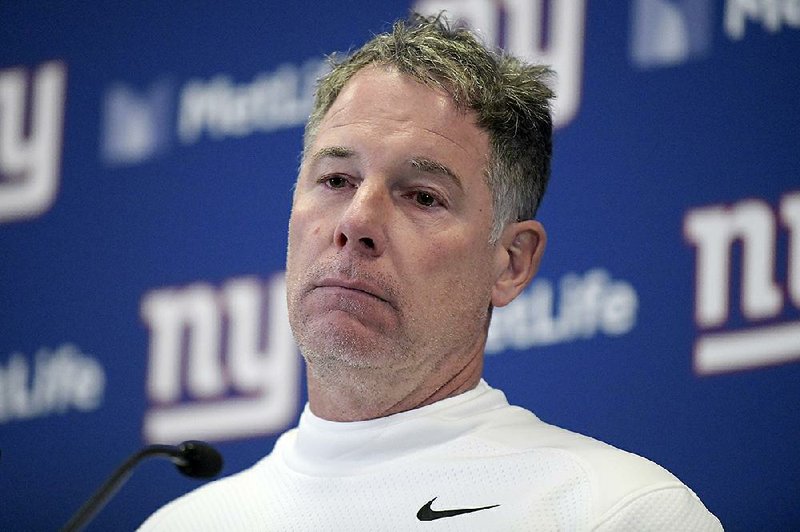 Pat Shurmur understands the criticism and accepts it willingly. In the famous words of another Giants coach before him, at 7-21, you are what your record says you are.

"I'm well aware of it," Shurmur said Sunday a few minutes after the Giants lost to the Packers, 31-13, their eighth straight defeat. "People will change what they think of us and me when we win games. I'm a realist, and I get that. When you don't win, I expect what's written and said and what people think. I expect fans to be upset, because we are, too."

This is an abysmal run for the Giants, who came into the season harboring playoff hopes, but are now careening toward a record so bad they might end up with the first overall draft pick.

How bad has this team become? The Giants might be the worst team in football. Even the previously winless Bengals squeezed out a victory over the Jets in Cincinnati. And the Dolphins, who started off 0-7, beat the Eagles at home on Sunday for their third win of the season.

Shurmur might want to believe that there is improvement, but the empirical evidence is missing. This is the NFL, whose "on any given Sunday" credo means even the worst teams stand a chance of winning. But the Giants are putting forth one of the worst seasons in franchise history and are only one loss from tying the franchise record of nine in a row. That ignominious mark came in 1976, at the peak of the worst days of the team's nearly century-long history.

Sunday was another reminder of how bad things have gotten. Not only did the crummy weather keep many Giants' fans away, but chants of "Go Pack go!" from Packers fans underscored the malaise now enveloping this franchise. It was an unwelcome 65th birthday present for team president and CEO John Mara, who can never forget the scorn he witnessed -- and felt firsthand -- from fans frustrated by the team his father, Wellington, presided over. John Mara hated going to school back then, knowing that his classmates would make fun of his family's team because of its routinely pathetic performances.

Like his father before him, John must now chart the course for the future by deciding either to give Shurmur and General Manager Dave Gettleman more time to develop the team, or to remove one or both men.

Mara bears his own responsibility in what has happened. He has now missed on two coaches since parting ways with Tom Coughlin after the 2016 season. The first was Ben McAdoo, who didn't even last two seasons.

Shurmur suggested the Giants' ability to keep things close against the Packers -- they got to within 17-13 midway through the third quarter -- was another sign of improvement. But there was virtually no chance that they could stay with the 9-3 Packers and future Hall of Fame quarterback Aaron Rodgers, who blew the game open in the fourth quarter. Rodgers had four touchdown passes against a defense that has been at the heart of the Giants' problems this season.

Shurmur's offense wasn't any better. Daniel Jones had some nice throws early on, including an 18-yard touchdown to Sterling Shepard in the first quarter. But Jones' turnover problems surfaced again, this time in the form of three interceptions.

Jones has certainly shown promise for a rookie quarterback, and there are moments when you can envision him one day flourishing at this level.

But he is unable to avoid the kinds of rookie mistakes that so many others make.

It remains to be seen whether Shurmur will be the one shepherding Jones through his career, and whether Gettleman deserves to continue the roster-building process.

Or whether Mara will decide the results can't justify maintaining the status quo.

In the end, the decision might be made for him. If the losing continues, there will be no other choice.

Print Headline: Giants get closer to a house cleaning