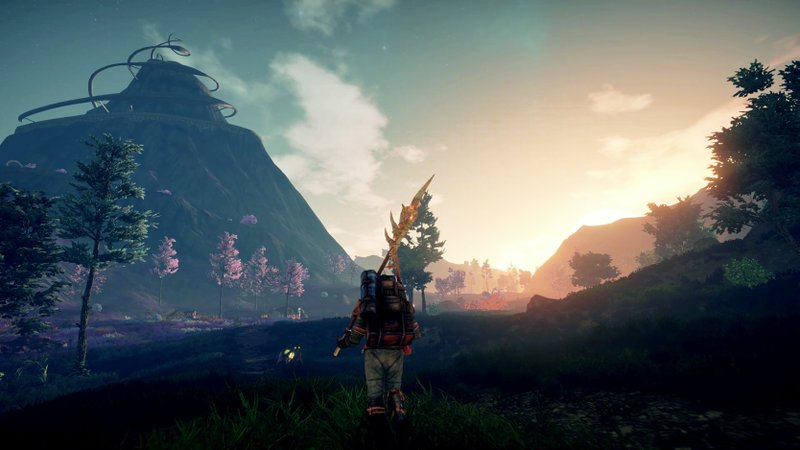 Rating: Mature for some fantasy violence, blood and gore

Tired of every role-playing game lauding you as the chosen one, with a destiny to save the world? Here comes "Outward," which assures players they are in fact no one special, just common adventurers, the kind that meets doom on a regular basis.

That's not to say you aren't effectively immortal in "Outward," as dying is not the end of your story, but combat resembles that of "Dark Souls," albeit with heavier consequences.

"Outward" is not just an RPG but a survival RPG. In addition to fighting enemies and completing quests, players must also hunt or forage for sustenance, brew potions, craft new equipment using minerals mined from deposits and find ways to survive areas filled with bitter cold and scalding heat. Hardcore mode adds a significant challenge: When you fall in combat, there's a 1 in 5 chance your character dies and is permanently deleted.

There's a hefty amount of exploring to do in "Outward," and the map feels bigger than it is because there's also no fast travel and no mounts. If you want to go somewhere, you're walking there.

Your inventory will also have to be managed well because you're limited to about what a normal human would be able to carry around. At the start of the game, you possess little. Your character was part of a failed expedition and is now broke. What's worse, a blood debt, passed down in your family for generations, must be paid — and quickly.

The first major quest is to scour the town of Cerzios for the necessary starting supplies of a basic adventurer — a flint and steel for making campfires, a waterskin, a weapon and a pack — and then to go earn 150 silver coins for the next payment on the blood debt.

Excited, I set out from the gates of the town for the first time and found that literally everything in the game was capable of easily killing me, even the large, chicken-like birds domesticated as livestock. But death is not the end. Instead, after a short transition screen, I was notified that a helpful traveler had found me, patched me up and left me sleeping next to a campfire. My bag and all my valuables were still intact, although my meager armor had taken some damage.

And so it went, with me discovering various new enemies (bandits, giant crustaceans, mean dogs) and then finding myself dead, again.

Combat does quite resemble "Dark Souls," with options to either block or dodge-roll past attacks. Techniques such as kiting are also effective, and preparation is really the key to surviving early fights. Players can set up multiple tripwires, load the trap with spikes or a weapon, and then lead enemies into the trap, damaging or slowing them.

Of course, even if you aren't prophesied for glory, that doesn't mean you must remain part of the hoi polloi forever. Various trainers can teach your character skills, such as a special attack with a weapon or the ability to charge and bash enemies with your shield, and there are multiple class specializations eventually available. All this for a price, of course, with some skills costing 500 silver to obtain.

Is that a lot? It sure felt like it to me.

At least in the beginning, money does not come easily or quickly. And because this is a proper fantasy RPG, characters can even learn magic. Don't expect all-powerful spells that instantly clear the battlefield, though. You're more like Gandalf than Harry Potter.

The ability to gain mana comes only after finding the confluence of a ley line, and your health and stamina must be permanently reduced in exchange. Spells themselves, while useful, take time and resources to cast. Runic spells, for example, must be cast in a specific sequence, making them unwieldy for use in close combat.

There are three factions to join, with the choice permanent and greatly affecting the storyline, giving "Outward" some significant replayability. That's in addition to the choice of character class, which can be focused on melee, stealth, archery or magic — or any combination.

There are eight class specializations, and players can specialize in three of them. These range from stamina-based warrior monks and flintlock-shooting mercenaries to spellblades that master the martial and arcane arts. The farther you (slowly) progress in the game, the more powerful you become, but the threats increase, with harder, more fantastical creatures to fight.

My favorite moment came when, some time after receiving a warning that bandits would capture me and sell me into slavery, rather than waking up next to a campfire after a defeat at the hands of a bandit, I did actually find myself stripped of gear and in a mine, forced to dig ore while plotting my escape.

Graphically, "Outward" is nothing to write home about. Despite being released this year, the graphics are already pretty dated — I'd say significantly worse than the remastered "Skyrim," and some compared it with "Mount & Blade: Warband." Combat can be a bit clunky and hard to get the hang of, and it's not bug-free. For the best experience, take advantage of 'Outward's" co-op mode and take a friend to enjoy the world with you.