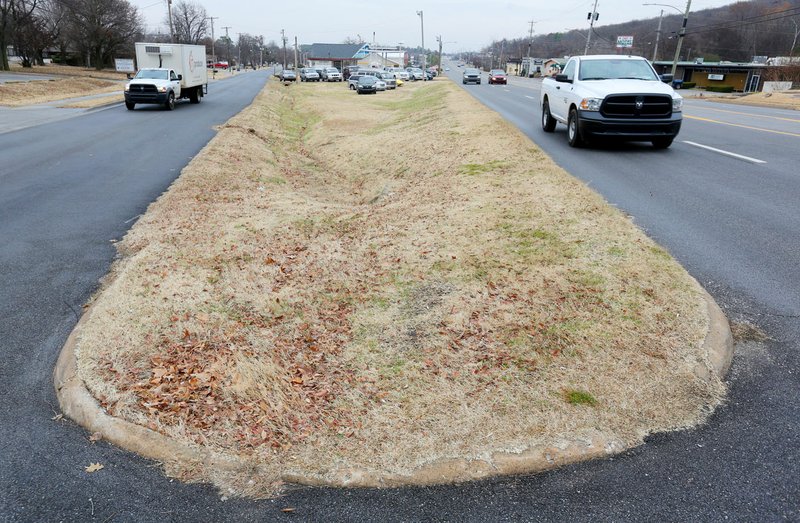 NWA Arkansas Democrat-Gazette/DAVID GOTTSCHALK Traffic moves along Tuesday on Green Acres Road and College Avenue in Fayetteville. The intersection will be redesigned with a common area using vacated right of way. The city has $10 million in bond money allotted for improvements on the U.S. 71B corridor, with some of the most immediate work set for College Avenue between North and Township streets.

FAYETTEVILLE -- The city is ready to start changing the face of the main drag running through town.

The City Council on Tuesday will consider adopting a work plan for the U.S. 71B corridor, the largest part of which is College Avenue. The final draft of a study from consultants RDG Planning+Design is ready, and now it's time to make aspects of the plan a reality, Planning Director Andrew Garner said.

"The technical work is pretty much done," he said. "But we would like the council to act on some of the items in the plan that we feel have gained traction through the public process over the last 18 months."

The plan identifies work that could be completed within six years. Planning staff has honed in on what it wants to take on first.

College Avenue between North and Township streets would be among the first focus areas. The city last year worked on Maple to North streets, widening the sidewalks, adding street lights and replacing curbs and gutters. That stretch also was rezoned in 2017.

City planners have said the process for North to Township streets will be similar to what it was for Maple to North streets.

New sidewalks, lights and trees, a pedestrian crossing at Memorial Drive and medians are expected. Green Acres Road would be realigned, with the green space displayed more prominently. The intersection at Township would be overhauled to include a bus stop.

At another section of the corridor, a street parallel to College Avenue is planned west of Fiesta Square to connect Appleby Road to Plainview Avenue. Rolling Hills Drive would extend into Fiesta Square, with a possible roundabout connecting to Appleby and Plainview.

On the south side of town, the Archibald Yell Boulevard/South College Avenue/Rock Street intersection would get an overhaul. Archibald Yell would get pedestrian crossings. South School Avenue south of Martin Luther King Jr. Boulevard to Cato Springs Road could be reduced to three lanes with room for continuous sidewalks, a path for bicycles and parallel parking.

The other major piece of work will involve rezoning property east and west of College Avenue, much like Maple to North streets was rezoned.

The plan from RDG identifies potential locations for private development. The zoning plan that planning commissioners and staff will develop will guide where developers place buildings on the lots, Development Services Director Garner Stoll said.

"It's very much an analysis, parcel by parcel, of the corridor, trying to identify development potential," he said.

The City Council in May authorized issuing $36 million of the total $74 million for transportation bond projects voters approved. Included in the $74 million was $10 million specifically for the U.S. 71B plan.

The Appleby Road and Plainview Drive connection and reducing South School Avenue to three lanes should happen within three years, Stoll said. The design work for the section between North and Township streets would happen in the first three years. Construction would happen during the three years after that, he said.

The city has a plan to do projects in three, three-year phases. At least 80% of the bond money for a project has to be spent or contractually obligated within three years, according to federal regulations.

Council member Kyle Smith said the plan puts forth a strong vision taking decades to fully realize. The projects planning staff has presented are a good start to spur a re-imagining of the corridor, he said.

That transformation will take place over a long time, but the plan outlines a way to approach redevelopment piece by piece while also fostering cohesion, Smith said. Council members have heard from residents in the past saying U.S. 71B is a place where higher density is appropriate, he said.

"I hope this is an opportunity to plan for the long-term population growth without sprawling ourselves and busting at the seams around the edges," Smith said. "It's right where you need to be and where everyone wants to go."

The city will have more leeway to do what it wants along the corridor once it takes ownership of U.S. 71B from the Arkansas Department of Transportation. The state and city have agreed to a deal. The city hasn't received word yet on when the transfer of ownership will happen, but it could be by the end of this year, Brown said.

To read the final draft of the U.S. 71B corridor plan, go to: