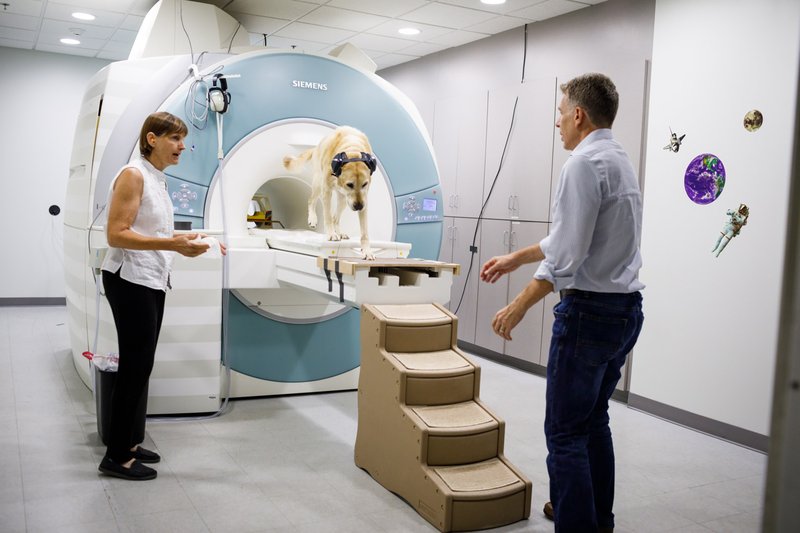 Gregory Berns, right, a neuroscientist at Emory University, with Zen, a retriever mix, in Atlanta, Nov. 14, 2019. Berns has used magnetic resonance imaging machines to watch what goes on in dogs' brains. (The New York Times/DUSTIN CHAMBERS)

TEMPE, Ariz. — Xephos is not the author of Dog Is Love: Why and How Your Dog Loves You, one of the latest books to plumb the nature of dogs, but she helped inspire it. And as I scratched behind her ears, it was easy to see why.

First, she fixed on me with imploring doggy eyes, asking for my attention. Then, every time I stopped scratching she nudged her nose under my hand and flipped it up. I speak a little dog, but the message would have been clear even if I didn't: "Don't stop."

We were in the home office of Clive Wynne, a psychologist at Arizona State University who specializes in dog behavior. He belongs to Xephos, a mixed breed that the Wynne family found in a shelter in 2012.

Wynne's book is an extended argument about what makes dogs special — not how smart they are, but how friendly they are. Xephos' shameless and undiscriminating affection affected his heart and his thinking.

As Xephos nose-nudged me again, Wynne was describing genetic changes that occurred at some point in dog evolution that he says explain why dogs are so sociable with members of other species.

"Hey," Wynne said to her as she tilted her head to get the maximum payoff from my efforts, "how long have you had these genes?"

No one disputes the sociability of dogs. But Wynne doesn't agree with the scientific point of view that dogs have a unique ability to understand and communicate with humans. He thinks they have a unique capacity for interspecies love, a word that he has decided to use, throwing aside decades of immersion in scientific jargon.

Dog Is Love is one of several new books on dogs out this year, and one of a flood of such books over the last decade or so. Brian Hare, an evolutionary anthropologist and researcher of dog behavior at Duke University, who founded the Duke Canine Cognition Center, recently wrote that there are 70,000 dog books listed on Amazon.

Since 2000, around the time dog research had a resurgence, a small but significant number of those books are written by scientists for a general audience. Like Hare's The Genius of Dogs, published in 2013, the books address what is going on in a dog's heart and mind. Most emphasize the mind.

Wynne's book runs counter to Hare's when it comes to the importance of dogs' thinking ability, which Hare sees as central to their bond with humans. By using the L-word, Wynne may well appeal to the many besotted dog owners. But he may also disappoint. The reason dogs are such "an amazing success story" is because of their ability to bond with other species, he said. Not just humans.

Some now extinct wolves attached themselves to humans 15,000 years ago or longer because we had good leftovers, or so the dominant theory goes, although what actually happened is lost to time. Apparently, humans liked the renegade wolves quite a bit and eventually started controlling their breeding and letting them sleep on down coverlets.

Now, as Wynne said in a talk at the International Canine Science conference in Phoenix in October, dogs are an astonishing evolutionary success. Wolves, not so much. "For every one surviving wolf on this planet, there are at least 3,000 dogs." On the other hand, nobody puts a silly Halloween costume on a wolf.

In the early 2000s, when Wynne began research on dogs, one of his experiments was a follow-up on the work of Hare who had concluded that dogs were better than wolves or other animals at following human directions. In particular, dogs followed human pointing better than other animals. Wynne and Monique Udell, an animal behaviorist at Oregon State University, expected to confirm Hare's findings. 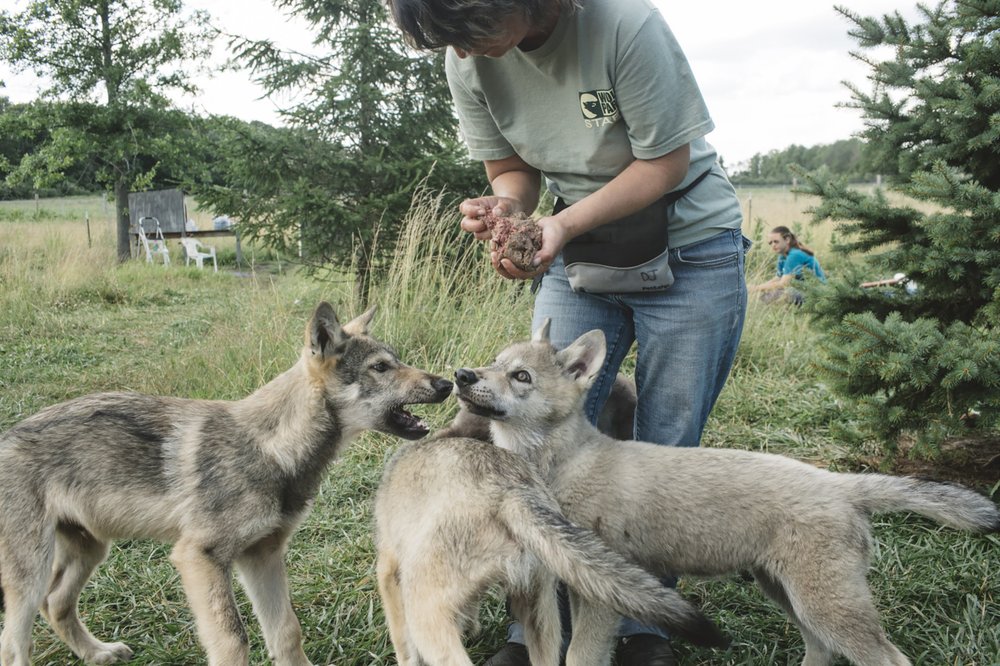 The wolves they chose to work with were hand-raised and socialized at Wolf Park, in Lafayette, Ind. Wynne said he found the wolves were as good at following human pointing as the best pet dogs.

Hare and his colleagues responded by questioning whether the experiments were really comparable, maintaining that dogs have an innate ability to follow human pointing without the special attention the wolves were given. The debate continues.

The second part of Wynne's argument has to do with how social dogs are. There is no question that they bond with people in a way that other canines do not. Wynne recounted an experiment showing that as long as puppies spend 90 minutes a day, for one week, with a human any time before they are 14 weeks old, they will become socialized and comfortable with humans.

Interestingly, the experiment found no genetic absolutism about the connection between dogs and humans. Without contact with humans when they are young, dogs can become as wary of humans as wild animals. Wolves are not so easily socialized. They require 24-hour-a-day involvement with humans for many weeks when they are puppies to become more tolerant of human beings. They never turn into Xephos.

DOG IN THE MACHINE

The evidence of dog affection for humans goes beyond the observable actions of Xephos and those like her. Gregory Berns, a neuroeconomist at Emory University, who himself was drawn into animal study by wanting to understand what his own dog, Callie, was thinking, used MRI machines to watch what was going on in their brains.

By looking at the lemon-size dog brain, he has shown, for instance, that, based on how the reward center lights up, a dog likes praise as much as it likes hot dogs. In testing outside of the MRI, Berns has also found that, given a choice, some dogs prefer their owners to food.

He agreed that the hypersociality of dogs is what makes them special rather than particular cognitive abilities. "It's hard to demonstrate any cognitive task that dogs are superior in," he said. But he pointed out that "ultimately the difficulty is in saying what is a cognitive function and an emotional function."

Alexandra Horowitz, head of the Dog Cognition Lab at Barnard College in New York, and a prolific writer on dogs, also addressed the question of love briefly in her new book, Our Dogs, Ourselves.

Without doubt, dogs have feelings, she wrote, but she cautioned that just as certainly, those feelings were not the same as human feelings. Nor, she argued, should we assume that dogs are in between robot and homo sapiens on an emotional spectrum. She wrote in her book, "For all we know, dogs' emotional experience is far more elaborate than ours."

Central to that experience, although unknown in its complexity, is the pleasure a dog experiences in the presence of humans. The intensity of that pleasure and the ease of triggering it, Wynne said, are built into the dog genome.

He found this in his research with Bridgett vonHoldt, a molecular biologist at Princeton University. She and a team of researchers identified genes in dogs that in humans are associated with Williams-Beuren syndrome, a rare genetic disorder. One of the many symptoms of the syndrome is indiscriminate friendliness. Wynne and Udell worked with vonHoldt on a subsequent study of wolves and dogs that tied behavior and genetics together. They concluded that the genes associated with Williams-Beuren syndrome in humans underlie the friendless of dogs compared to wolves.

Humans, they suggested, may have selected friendly dogs over thousands of years of domestication and the Williams-Beuren genes may be one of the results. Other scientists have been cautious about the results, seeing the work as presenting an intriguing hypothesis that requires more research.

Whether these are the genes involved, humans appear to have molded dogs to be friendly to other species beyond humans. Apparently, puppies introduced to any other species when they are young enough, form a strong bond with that species.

Dogs have "an abnormal willingness to form strong emotional bonds with almost anything that crosses their path," Wynne said. "And they maintain this throughout life. Above and beyond that they have a willingness and an interest to interact with strangers."

How and when this free love, or hypersociality, evolved in dogs is up for debate. Wynne is betting that after some ancient wolves began to associate with humans 15,000 or more years ago and became dogs, and humans began to live in settlements and farming took off about 8,000 years ago, humans began to breed dogs for friendliness, causing the genetic differences that vonHoldt found. With luck, future research on modern and ancient dog DNA will show if he is right.