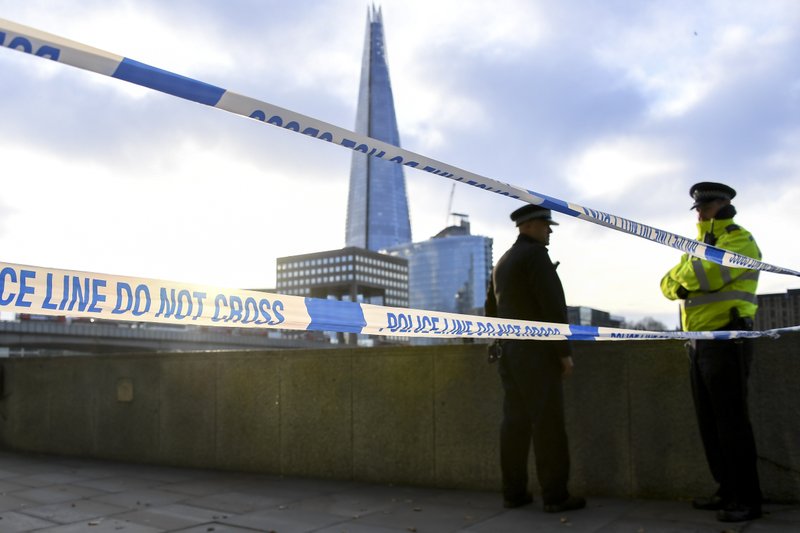 Police officers patrol the scene in central London, Sunday, Dec. 1, 2019, after an attack on London Bridge on Friday. Authorities in Britain say the convicted terrorist who stabbed to death two people and wounded three others in a knife attack Friday had been let out of prison in an automatic release program. (AP Photo/Alberto Pezzali)

LONDON -- Three of the five people who were killed or wounded in the London stabbing attack were former Cambridge University students or staff members who had gathered for an event designed to connect graduate students with prisoners, police and the university said Sunday.

The two dead were identified as Saskia Jones, 23, and Jack Merritt, 25, who had already been named by his family as having perished in the attack Friday near London Bridge.

"Both were graduates of the University of Cambridge and were involved in the Learning Together program -- Jack as a coordinator and Saskia as a volunteer," police said.

Started five years ago, the program was designed to bring graduate students together with prisoners to study criminology in an effort to reduce stigma and marginalization experienced by many inmates.

Jones' family described her as having "a great passion for providing invaluable support to victims of criminal injustice, which led her to the point of recently applying for the police graduate recruitment program."

The family said she wanted to specialize in victim support.

Merritt's family said he "lived his principles" and "believed in redemption and rehabilitation, not revenge, and he always took the side of the underdog."

The attacker, Usman Khan, was apparently attending the event and had returned for the afternoon session when he started stabbing people. Police believe he acted alone.

Khan was a convicted terrorist who had secured early release from prison. He was shot dead by police after he was restrained by civilians. Officers opened fire after he flashed what looked like a "suicide vest," but it was a fake device.

One of those who was wounded was a university staff member. The three survivors were not named. Officials said one was released from a hospital Sunday, and the others were in stable condition.

The gathering had been meant to celebrate the fifth year of the program, university Vice Chancellor Stephen Toope said.

Some people at the event, including prison staff and former prisoners, put their lives in danger to restrain the attacker until police arrived, officials said.

Loraine Gelsthorpe, director of the university's Institute of Criminology, said "they worked together selflessly to bring an end to this tragedy and to save further lives."