University of Arkansas Little Rock head coach Darrell Walker during the game against the East Tennessee State University Pirates at the Jack Stephens Center in Little Rock on November 30th 2019. More photos are available at arkansasonline.com/121etsualr/ - Photo by Jeff Gammons

University of Arkansas at Little Rock men's basketball Coach Darrell Walker isn't known to hold in gripes over his team's performance after games.

The admittedly old-school coach is, more often than not, sharp during his postgame assessments.

But that wasn't the case Saturday at the Jack Stephens Center in Little Rock, even after the Trojans fell 67-63 to East Tennessee State, a team picked to finish first in the Southern Conference that gave No. 4 Kansas a game at Phog Allen Fieldhouse on Nov. 19.

Walker was upbeat, despite UALR (5-4) losing a seven-point lead with under seven minutes to play.

"Overall, we're coming," Walker said. "I like what I see from my team. I really do."

UALR got big production out of sophomore point guard Markquis Nowell and junior guard Ben Coupet Jr. Nowell finished with 20 points, including 4 of 9 from the three-point line, and 6 assists.

Coupet shook off a two-game slump, in which he had combined for 5 points on 2-of-13 shooting, to tally 15 points on 5-of-10 shooting with 6 rebounds.

But in the closing minutes, the Trojans were outgunned by ETSU (7-1).

A reverse layup by Nowell gave UALR a 56-49 lead with 6:32 left, but that evaporated less than a minute later after ETSU guard Daivien Williamson completed a four-point play after being fouled while making a three, and guard Patrick Good hit another three-pointer in transition, tying the game 56-56. The Buccaneers finished 11 of 22 from long range.

"They definitely hit some clutch shots," Nowell said. "Guys had their hand up. They just shot right over us. For the most part, Coach said he was proud of our defense."

Coupet got UALR the lead back on a three-point play after he was fouled on a layup.

Williamson and Good each hit another three apiece, with Good's giving ETSU a 64-61 lead with 2:22 left that it wouldn't relinquish. The basket came after UALR sophomore forward Kamani Johnson missed the a free throw on the front end of a one-and-one.

UALR, trailing 66-63 with 1:14 left, had multiple chances to tie the game, but the Trojans missed three consecutive three-point attempts.

Williamson led ETSU with 20 points while going 5 of 6 from beyond the arc. Guard Isaiah Tisdale added 14 points and six rebounds.

Freshman guard Jovan Stulic had 9 points and 4 rebounds for UALR, and Johnson contributed 8 points and 8 rebounds.

Without sophomore forward Nikola Maric (NCAA-mandated suspension), junior forward Kris Bankston (back injury) and junior guard Alsean Evans (toe injury), the Trojans essentially have been limited to a six- or seven-man rotation. The lack of depth becomes an issue in tight games such as Saturday. Offensively, UALR doesn't have reliable options outside of Nowell or Coupet.

Defensively in the second half, Walker had UALR press and trap more to disrupt ETSU's offense. But the Trojans couldn't sustain it or create enough separation, and ETSU clawed back to earn its fourth consecutive victory.

"This team is a very good basketball team we just played, and we took them all the way down to the end," Walker said. "Wasn't mad at my guys. Matter of fact, I told them I was really happy how they competed. If they keep believing in [themselves], then we have a chance to be pretty good." 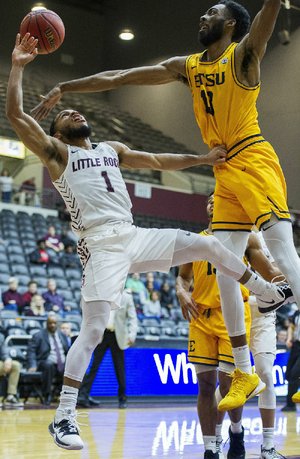 Photo by Jeff Gammons
UALR guard Markquis Nowell (left) goes up for a shot against East Tennessee State center Octavion Corley on Saturday during the Trojans’ 67-63 loss to the Buccaneers at the Jack Stephens Center. More photos are available at arkansasonline.com/121etsualr.