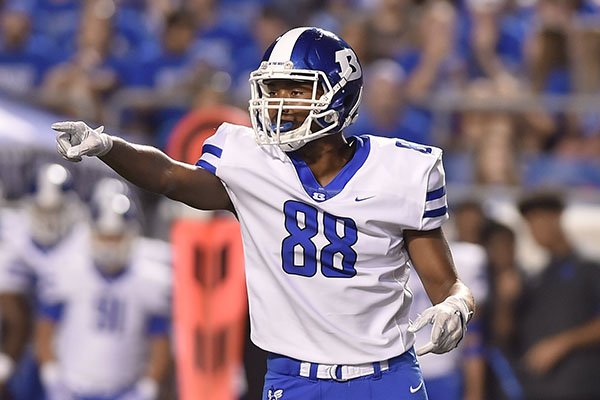 There's much debate among Arkansas fans about the qualities the next head football coach should possess.

Two Razorback commitments and a former commitment have their own opinions about what they hope to see from the new head Hog.

Outside linebacker commitment Catrell Wallace wants to see a coach who is enthusiastic about the game.

"I like being coached even if we're winning so I can correct my mistakes and get better," Wallace said. "I wanna see that he's competitive and will still coach if we're down in the fourth quarter. I'd like him to push us to be our best and further past that."

Wallace, 6-6, 212 pounds, of Bryant is a big reason why the Hornets are 12-0 and ranked No. 1 in the state going into Saturday's Class 7A state title game against North Little Rock.

He had recorded 41 tackles, 4 tackles for loss, 2 sacks, 3 quarterback hurries, 5 pass breakups and 4 blocked punts going into Friday's semifinal matchup against Bentonville West. His playing time has been limited because of the Hornets' blowouts throughout the season.

Wallace said he would embrace a coach who is similar to Bryant Coach Buck James.

"He shows his love for the game," Wallace said. "He pushes us in practice to be our best and tells us our flaws and mistakes. Punishes us for not competing in practice. Makes sure we keep our head on straight and stay focused in the classroom first and everything is else second."

Some have advocated for the next coach to take a harder look at in-state prospects. Defensive end commitment Jashaud Stewart hopes the new coach will pull the state together.

"The ability to get everyone bought in," Stewart said. "Give more in-state recruits an opportunity to become a Hog. I feel like it's a lot of talent in the state that's missed out on. Arkansas has a lot that can play ball but don't have the stars, which doesn't mean much."

"I hope the coach makes every player earn his spot on the field and doesn't baby recruits up and be hard-core honest and up front with the players," Stewart said. "I think it prepares you for life and helps you grow up and mature. Being coached hard shows you that you can never get comfortable and content with where you are, and that you always work on your game mentally or physically."

Former Arkansas tight end commitment Allen Horace remains interested in the Hogs and is keeping an eye on the news coming out of Fayetteville.

"I already got mad love for Arkansas," he said.

Horace, 6-5, 242, of Crockett, Texas, chose Arkansas over scholarship offers from Nebraska, Baylor, Oklahoma State and Texas Tech in April. He reopened his recruitment Nov. 11, the day after Chad Morris was fired as the Hogs' coach.

"Priority number one, keeping Lunney and Traylor," Horace said of his desire for a new coach.

Horace hopes the new coach can bring a culture of winning.

"I want to play with some dogs that are hungry," Horace said. "Because I know that Arkansas got the guys to be that."