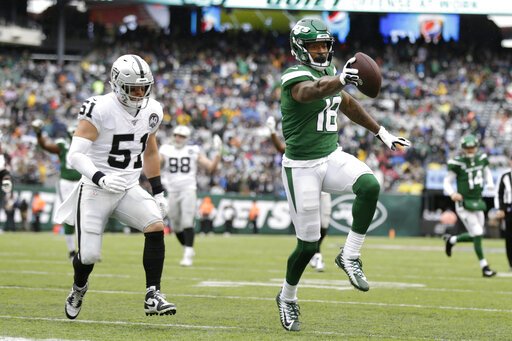 New York Jets wide receiver Demaryius Thomas (18) runs away from Oakland Raiders inside linebacker Will Compton (51) for a touchdown during the first half of an NFL football game Sunday, Nov. 24, 2019, in East Rutherford, N.J. The touchdown was later nullified by penalty. (AP Photo/Adam Hunger)

KANSAS CITY, Mo. -- Jon Gruden was asked this week whether he thought his Oakland Raiders were looking ahead to their AFC West showdown with the Kansas City Chiefs when they were walloped by the New York Jets.

Well, the Chiefs have their undivided attention now.

The Raiders (6-5) head to Arrowhead Stadium today knowing full well that their chances of winning the division -- and making the playoffs -- rest heavily on the outcome. Win and they are not only tied for first place, but they wipe out the tiebreaker Kansas City (7-4) owns by virtue of their Week 2 victory in Oakland; lose and they are merely another .500 team treading water.

"Hopefully it brings out a much better performance in us."

The Raiders couldn't do much worse than they did in their 34-3 loss to the Jets. Derek Carr threw for just 127 yards with an interception while Josh Jacobs was held to 34 yards rushing.

The defense? It didn't fare a whole lot better.

But the Chiefs also know better than to overlook the Raiders, even though they've dominated the series since Andy Reid rolled into town. It's a rivalry steeped in not only tradition but hatred, one that traces its roots to the earliest days of the old AFL.

It's the kind of rivalry that spawned the "throw the records out" clichés, even though records just happen to be so relevant this week that the game was flexed to an afternoon kickoff.

"We don't really care what happened [against the Jets]. It doesn't matter in the National Football League," Reid said.

"You have to be ready every week, in particular when you have an opportunity to play an AFC West opponent. It's really about us getting ourselves ready. That's what we're going to focus on this week. That's where all of our energy will go."

The weather could also play a factor in today's game. The Raiders have lost nine consecutive games played in temperatures below 50 degrees and are likely set for another cold-weather game against the Chiefs (the highs are expected to be in the mid-30s). Oakland was held to three points last week on a cold, wet day against the Jets. Gruden said he can't simulate that weather in California, though, so the Raiders will just have to learn to deal with it.

"I'm not a genius. I'm not Thomas Edison," Gruden said. "We're just trying to show pictures of people that are cold that deal with cold. I don't know. We're not going to overanalyze it."

The Chiefs expect to get several of their starters closer to 100 percent after having to wait until Week 12 for their bye. Wide receiver Tyreek Hill, who hurt his hamstring against the Chargers in Mexico City, is likely to play thanks largely to the extra week of rest.

Carr has a couple of memorable wins at home against Kansas City, including the first of his career after a 0-10 start in 2014 and a dramatic primetime comeback two years ago.

But it's been a different story at Arrowhead Stadium, where Carr has lost all five of his starts. He has a quarterback rating of 61.9 in those games, the worst of any road venue in which he's played multiple games.