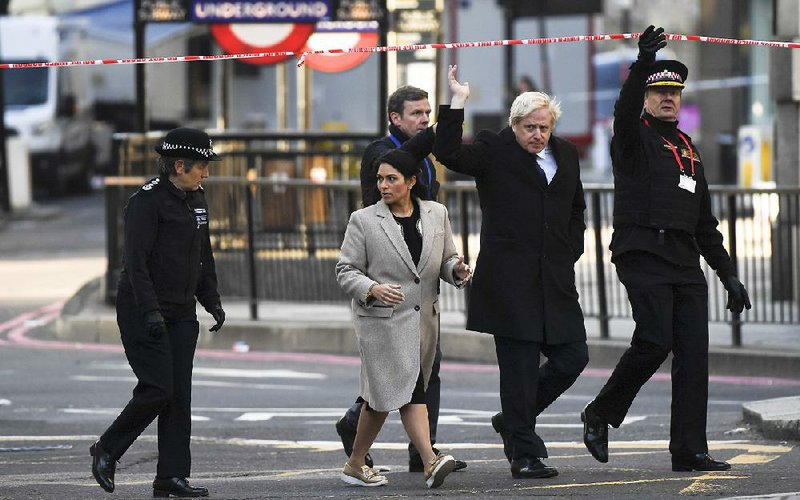 LONDON -- The knife-wielding assailant who fatally stabbed a man and a woman in an attack near London Bridge was a convicted Islamist terrorist recently released from prison after serving just half of his 16-year sentence for an earlier plot to bomb the London Stock Exchange, police said Saturday.

The attacker, identified by authorities as Usman Khan, 28, was shot dead by police after stabbing at least five people Friday.

A burly man with a thick black beard, Khan was tackled to the ground on the bridge by members of the public, who were hailed by Queen Elizabeth II in a statement Saturday as "brave individuals who put their own lives at risk to selflessly help and protect others."

Khan was wearing what turned out to be a fake "suicide vest" and was first subdued by men armed with a fire extinguisher and a narwhal tusk that was taken off the wall of the Fishmongers' Hall beside the bridge, where the attack began. One of the men hailed as a hero is a migrant from Poland.

[Video not showing up above? Click here to watch » https://www.youtube.com/watch?v=t8b-i_o1SdM]

The attack has left British authorities facing uncomfortable questions over early-release provisions for inmates jailed for terrorism-related crimes and the efficacy of monitoring and "deradicalization" programs after they are free.

Those questions loom, too, as Britain and other European countries struggle over what to do with British-born fighters and their families returning after their years with the Islamic State group in Syria and Iraq.

On Saturday, British media outlets reported the name of one of the victims killed by Khan: a 25-year-old law and criminology course leader named Jack Merritt, whom the Daily Telegraph described as "someone always on the side of the underdog." Merritt was attending a conference hosted by Learning Together -- a Cambridge University-backed program that works to reeducate and socialize prisoners. Khan also was at the event before he went on the rampage, authorities said.

Police said that they were aware that one of the victims had been named in the media but they were still awaiting formal identification from the coroner.

[Video not showing up above? Click here to watch » https://www.youtube.com/watch?v=ycQmzOkogGQ]

Born and raised in Britain, Khan was released from prison 11 months ago and lived in Stafford, about a two-hour train journey northwest of London.

One of the conditions of his release in December 2018 was the requirement that he wear an electronic tracking device on his ankle, which Khan had on at the time of his attack.

In 2012, Khan, then 22, was sentenced to 16 years and jailed, along with eight others, for plotting to attack London landmarks, including the stock exchange and pubs in his hometown of Stoke-on-Trent.

Before his arrest in 2010, Khan was a member of a cell inspired by the al-Qaida terrorist organization. The group was trying to assemble materials and knowledge to make pipe bombs and other explosive devices, according to accounts of his earlier conviction. The men also were raising funds to construct a religious school in Pakistan that would have been used instead to train terrorists.

The plotters were arrested before they could carry out any attacks, as they were being monitored and surveilled by MI5, Britain's domestic law enforcement and intelligence service.

Khan had been on the authorities' radar for some time. On Saturday, the BBC broadcast footage taken in 2008, after Khan's home was raided by anti-terrorist police, in which Khan tells the broadcaster: "I ain't no terrorist."

The Islamic State group asserted Saturday that the London Bridge attacker was one of its followers. But the statement, carried by the militant group's Amaq News Agency, provided no evidence. The Islamic State often claims ties to attacks without offering any proof.

In the statement, the Islamic State group said the assailant had carried out the attack in its name and added that he had done so "in response to calls to target coalition countries." The phrasing indicates that the attacker was inspired by group's ideology and refers to a speech by a former spokesman, who urged followers to carry out attacks in any way they could, including stabbing.

Khan's former lawyer, Vajahat Sharif, told The Guardian that his former client "appeared to be rehabilitated and was a model prisoner."

Sharif worried that Khan had been approached after his release from prison by Islamist plotters and re-radicalized.

"I've no idea what happened after his release, that is what is shocking," Sharif told The Guardian. "Maybe he was not ideologically robust enough to resist the radicalizing groomers -- I thought he was a reformed character."

ITV news published a letter written by Khan in October 2012 asking to be placed in a deradicalization program. "I don't carry the views I had before my arrest and also I can prove that at the time I was immature, and now I am much more mature and want to live my life as a good Muslim and also a good citizen of Britain," he wrote.

Police said the incident started at Fishmongers' Hall, which stands beside the entrance to London Bridge.

Metropolitan Police Commissioner Cressida Dick said police were working "full tilt to understand exactly what has happened and whether anyone else was involved."

Asked whether Khan's early release and subsequent attack represented a failure of the system, Brandon Lewis, Britain's security minister, said he couldn't comment on the Khan case but told the BBC that going forward it would be right to "look again at the sentences, as I say, around these kind of violent crimes."

David Videcette, a former anti-terrorism detective and author, added that Britain must "look at sentencing and rehabilitation, as we have a huge problem with terrorist prisoners that are being released, and with those that want to come back from Syria."

Johnson, who visited the scene Saturday, said he had "long argued" that it was a "mistake to allow serious and violent criminals to come out of prison early." He said the criminal-justice system "simply isn't working."

Johnson spoke Saturday with U.S. President Donald Trump, who offered his condolences after the attack, according to White House spokesman Judd Deere.

Corbyn said it is not clear whether the probation office was involved at all and questioned whether the parole board should have been given a role.

The bridge across the Thames River in central London is a major artery -- and was the scene in June 2017 of a terrorist attack in which assailants identified as sympathizers of the Islamic State group rammed pedestrians with a van, then sought out victims to stab. In that attack, the three assailants also wore fake explosive vests and were fatally shot after killing eight people.

Video of Friday's attack showed at least three people wrestling with the assailant before police arrived: the person wielding the tusk of a narwhal, a white Arctic sea mammal; the person with the fire extinguisher; and a person who was seemingly unarmed.

London Mayor Sadiq Khan, no relation to the attacker, hailed the heroism of the public. Khan said Saturday that he was proud of the "ordinary people who acted in extraordinary ways," describing them as the "best of us, and the best of humanity."

The mayor said the attack was "not sophisticated." He noted people would not have known at the time that the device worn by the attacker was fake. "Another example of the bravery and heroism of ordinary Londoners," he said.

Information for this article was contributed by Gregory Katz and Samy Magdy of The Associated Press; by Stephen Castle of The New York Times; and by William Booth and Karla Adam of The Washington Post. 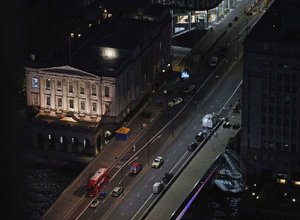 Photo by AP/YUI MOK
Vehicles move across London Bridge on Saturday evening after police released the identity of the knife-wielding attacker who stabbed at least five people near the bridge on Friday before he was killed by police. 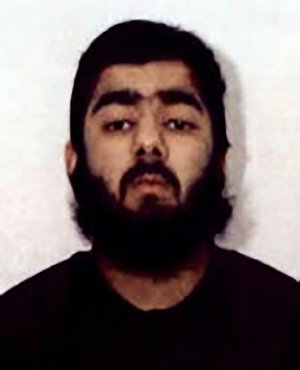 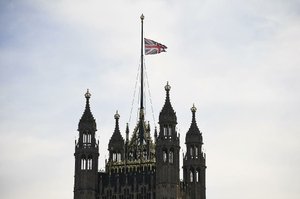 Photo by AP/ALBERTO PEZZALI
The British flag flies at half-staff Saturday over the Victoria Tower in London.