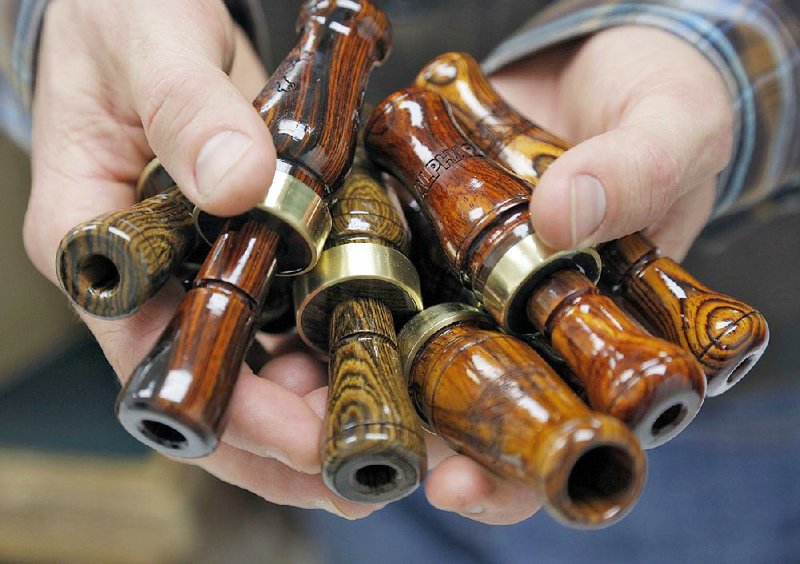 The best of the best will battle it out in the Champion of Champions duck calling contest at this year’s Wings Over the Prairie Festival in downtown Stuttgart. - Photo by John Sykes Jr.

STUTTGART -- Michael Steinmeyer of Jackson, Mo., turned his new gold ring over and over in his hand, its stone flashing like a party ball.

"It's mine," Steinmeyer said. "It's finally mine, and nobody can take it away from me."

"It's like Jimbo [Ronquest, winner of the 2006 World's Championship] said to me, 'Welcome to the club,' " Steinmeyer said.

Steinmeyer, 37, an insurance producer and avid duck hunter, said he began calling competitively in 2006. He said his first years were unimpressive, and he considered quitting.

Gallery: Wings Over the Prairie Festival

"But I could see gradual improvements," Steinmeyer said. "I thought, 'This is easier. This made me better.' "

Steinmeyer said he's blown the same basic routine from the beginning, with slight adjustments over the years. On Saturday, he said he knew something was blowing at a higher level after the first round.

"I don't go by sound anymore, I go by feel," he said. "There was something in the ring of the hail call. When I hit it, I could feel it go through my skin. The way the feed call flowed so fluidly. At that point, when you know you're on, you're on."

Steinmeyer said he didn't believe his routine or his tone was better than the other top competitors. He's competed against them all for years in contests around the country. He's beaten them at times, and they've beaten him.

"It was just my night," Steinmeyer said.

Steinmeyer said he felt the presence of mentors and encouragers who have helped him through his routines. One, he said, was the late Butch Richenback, founder of Rich-N-Tone duck calls. Another was his late friend Ryan Hudson.

"Ryan was one of those guys that always said, 'One of these years, your time is coming,' " Steinmeyer said. "Butch was Butch. He was brutally honest. You loved Butch for who he was."

The key to winning a World's Championship, Steinmeyer said, is persistence. Never lose sight of the goal.

"If you're going do it, do it. Don't give up," Steinmeyer said. "I felt like giving up multiple times. When we rolled into town and saw those Riceland grain bins on the outskirts of town, it was like, 'Wow! We're really here!'

"The thought of not going back to Stuttgart, to this contest, is what kept me going."