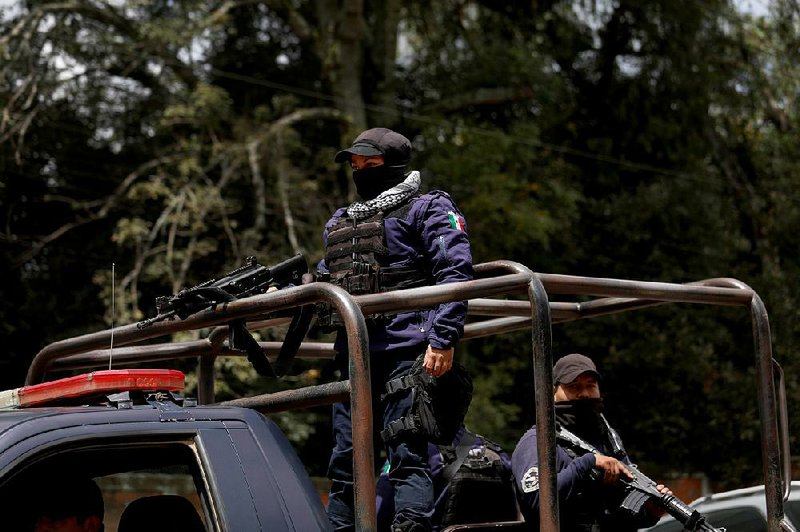 Members of an armed civilian avocado police force go on patrol earlier this year in Tancitaro in Mexico’s Michoacan state, where gangsters torched two avocado packing plants and abducted the son of a prominent packer. “It’s safe here now,” the sister of the abducted boy said of the civilian police force.

URUAPAN, Mexico -- The cartel members showed up in this verdant stretch of western Mexico armed with automatic weapons and chain saws.

Soon they were cutting timber day and night, the crash of falling trees echoing throughout the virgin forest. When locals protested, explaining that the area was protected from logging, they were held at gunpoint and ordered to keep quiet.

Stealing wood was just a prelude to a more ambitious plan.

The newcomers, members of a criminal group called the Viagras, were almost certainly clearing the forest to set up a grow operation. They wouldn't be planting marijuana or other crops long favored by Mexican cartels, but something potentially even more profitable: avocados.

More than a dozen criminal groups are battling for control of the avocado trade in and around the city of Uruapan, preying on wealthy orchard owners, the laborers who pick the fruit and the drivers who truck it north to the United States.

"The threat is constant and from all sides," said Jose Maria Ayala Montero, who works for a trade association that formed its own vigilante army to protect growers.

After seizing control of the forest in March, the Viagras announced a tax on residents who owned avocado trees, charging $100 an acre in "protection fees."

But they had competition. Rivals from the Jalisco New Generation cartel wanted to control the same stretch of land, and residents were about to get caught in the middle of a vicious fight.

In May, a convoy of pickups loaded with Jalisco fighters raced into the woods and an hourlong gunbattle broke out.

Juan Madrigal Miranda, a 72-year-old professor who runs a small nature center in the area, cowered on the floor of his cabin as bullets flew overhead.

His fear eventually gave way to anger at the growing power of the criminals, 10 of whom died in the forest that day.

"Around the country, the cartels want land, forest and water," Madrigal said. "Now they are fighting for the keys to life."

Homicides are at an all-time high in Mexico, which has long been home to the world's most powerful and violent narcotics traffickers. Yet much of the killing today has little to do with drugs.

In Guanajuato state, the homicide rate has nearly tripled over the past three years as criminals battle for access to gasoline pipelines, which they tap to steal and sell fuel.

In parts of Guerrero state, cartels control access to gold mines and even the price of goods in supermarkets. In one city, Altamirano, the local Coca-Cola bottler closed its distribution center last year after more than a dozen groups tried to extort money from it. The Pepsi bottler left a few months later.

In Mexico City, bar owners in upscale neighborhoods must pay taxes to a local gang, while on the nation's highways, cargo robberies have risen more than 75% since 2016.

Compared with drug trafficking, a complex venture that requires managing contacts across the hemisphere, these new criminal enterprises are more like local businesses. The bar to entry is far lower.

This new approach to organized crime was pioneered by the notorious Zetas cartel and spread in response to the government's 2006 declaration of war on drug traffickers.

Mexican forces, with strong U.S. support, focused on capturing or killing cartel leaders. But that strategy backfired as the big cartels fractured into smaller and nimbler organizations that sought criminal opportunity wherever they could find it.

"For many of those smaller groups, it's far easier to just prey on local populations," said Falko Ernst, a Mexico-based analyst with the International Crisis Group, which promotes nonviolent solutions to conflicts. "It's a myth that it's only about drugs."

In Michoacan, where there have been dozens of cartel splits over the past dozen years, organized crime's invasion of the avocado industry is a microcosm of what is happening elsewhere in the country -- and a potent illustration of how the government has unintentionally fueled more violence.

Many people in the region now long for the early 1990s, when just one family trafficked drugs through the region, and the state was largely at peace.

SPREAD OF THE ZETAS

The Valencia family was known as a benevolent force.

It built churches, gave money to the sick and averted violence by paying local authorities to ensure easy shipment of marijuana, heroin and cocaine to the United States.

But by 2000, trafficking groups from other parts of the country had grown envious of the Valencias, in particular their control of the Lazaro Cardenas seaport on Michoacan's Pacific coast.

The Gulf cartel, based in the eastern state of Tamaulipas, went to battle with the family, sending in its paramilitary force, the Zetas.

Formed in the late 1990s by deserters of an elite Mexican army unit, the Zetas embraced a new philosophy when it came to the drug trade. Instead of simply controlling strategic points along drug transport routes, they sought to minimize risk by also commandeering businesses along the routes.

In Tamaulipas, that meant taking over the sale of stolen gasoline and the smuggling of migrants. In Michoacan, the Zetas partnered with locals to put the Valencias out of business and then began extorting money from cattle ranchers and lime farmers.

In 2006, members of a group that called itself La Familia Michoacana burst into a crowded nightclub in Uruapan and rolled five severed heads onto the dance floor -- a message to the Zetas and a turning point for a nation not yet accustomed to such barbarity.

The group's methods helped it win control of the state, but they also provoked President Felipe Calderon to send in several thousand troops, the opening salvo in his national fight against cartels.

The government strategy failed to end crime and violence in Michoacan, and in some ways only made things worse.

Originally part of La Familia and later the Knights Templar cartel, which emerged in 2011 after the government crackdown, the Viagras later joined a government-run rural police force designed to topple the cartels.

When that force was disbanded, the Viagras lost their paychecks. But they still had their weapons and military-style training, so they returned to crime.

At the same time, another important change was transforming the state: Americans were falling in love with avocados.

Between 2001 and 2018, average annual U.S. consumption increased from 2 pounds per person to nearly 7.5 pounds.

Michoacan, whose plentiful rain, sunshine and rich volcanic soil make it an ideal place to grow the fruit, was uniquely positioned to capitalize on its rising popularity. It is the only state in the country allowed to sell to the United States, which banned avocados from Mexico until 1997 over concerns about pests.

As exports of Michoacan avocados boomed -- on their way to $2.4 billion last year -- luxury housing developments and car dealerships sprang up in Uruapan and elsewhere as swaths of forest were cleared to grow more.

And the increasing number of criminal groups all wanted a piece of the action.

On a recent chilly morning at a large farm a few hours outside Uruapan, dozens of avocado pickers sipped coffee around a crackling fire, preparing for a grueling day.

Scaling trees and clipping avocados pays much better than many jobs in Mexico -- $60 a day compared with the $5 minimum wage -- but it increasingly comes with serious risks.

Mayco Ceja, a slight 28-year-old who spent his childhood in California, said the dozen-man team of pickers that he leads was recently summoned to a farm that turned out to be run by gang members.

"They came at us with pistols," he said. "They forced us to pick for seven hours and didn't pay us."

Before the Valencia family trafficked drugs, it grew avocados, and it is an open secret that for decades criminals have used avocado farms to launder money. But never have the lower rungs of the industry been so vulnerable, with multiple gangs extorting cash from small-time growers and state officials recording an average of four truckloads of avocados hijacked each day.

One driver, who was heaving 45-pound crates of avocados into a tractor-trailer, said that in the past six months he has been held up twice by armed men who forced him to drive to a safe house and unload there.

He was too afraid to give his name. "They'll come to your house and shoot up your whole family," he said. "Kids included."

Last year, 1,338 people were killed in Michoacan, more than any year on record. This year has been even deadlier, with 1,145 homicides through September, putting the death toll on track to top 1,500.

Security has become so tenuous that in June a group of avocado producers bought ads in several national newspapers warning of an "irreparable impact" to the industry unless officials address the problem.

In August, the U.S. Department of Agriculture temporarily suspended its avocado inspection program in a town near Uruapan after threats to some of its employees. Local media reported that one inspector had been carjacked and another group of employees subjected to intimidation after they canceled a farm's certification.

Eduardo Moncada, a political scientist at Barnard College who is writing a book in part about extortion in Michoacan, said the avocado trade's relationship with organized crime varies dramatically across the region, which makes it difficult for authorities and citizens to navigate.

"When you don't know who controls what, it becomes much harder to live your daily life," he said.

Many people had high hopes for President Andres Manuel Lopez Obrador, who took office a year ago and declared that Mexico was no longer at war with cartels. But besides vowing to fight poverty and shift security duties from the military to a newly created civilian National Guard, he has yet to articulate a new plan to curb violence.

In the meantime, avocado producers in Michoacan are taking their own drastic measures.

After gangsters burned down two major packing plants and kidnapped the 16-year-old son of another prominent packer several years ago, producers in the municipality of Tancitaro, a major avocado hub an hour and a half from Uruapan, rose up.

Working with the local avocado trade association, the producers armed their own civilian police force, built guard towers at the entrances to every town and orchestrated a takeover of the municipal government by ensuring that only one mayoral candidate -- theirs -- was on the ballot.

The strategy has been criticized as a dangerous experiment in frontier justice. Yet the government has not intervened, and for now, the efforts appear to be working.

"It's safe here now," said Diana Flores Murillo, the sister of the 16-year-old who was kidnapped.

In the forest, the felling of trees continues. So does the cartel war.

One morning in August, residents in Uruapan awoke to a grisly scene.

"Be a patriot," read a banner draped from a highway overpass and signed by the Jalisco New Generation cartel. "Kill a Viagra!"

Dumped nearby were 10 corpses, some of which had been dismembered. Nine more bodies hung from the bridge -- seven men and two women strung up for the whole town to see.