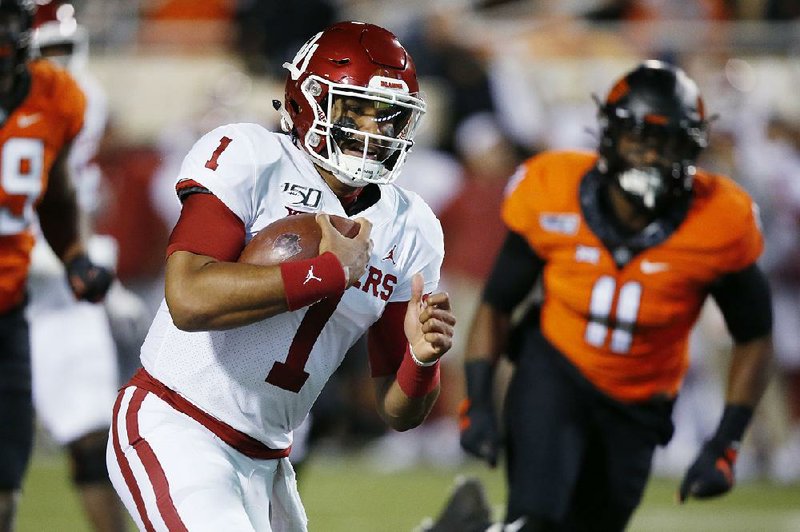 Oklahoma quarterback Jalen Hurts passed for 163 yards and 1 touchdown, and ran for 61 yards with another touchdown as the Sooners defeated Oklahoma State 34-16 on Saturday in Stillwater, Okla.

STILLWATER, Okla. -- Kennedy Brooks rushed for 160 yards and a touchdown to help No. 7 Oklahoma beat No. 21 Oklahoma State 34-16 on Saturday night.

It could have been a lot more.

"Very steady, continues to be him," Oklahoma Coach Lincoln Riley said. "Very in sync with the offensive line. He's been so close to popping a 60- 70-yarder. There were about five tonight when we thought he was out."

In his past four games, Brooks has rushed for 534 yards and averaged 6.7 yards per carry.

"He's held on to the ball, he's used great ball security," Riley said. "He always gets what's there. He never leaves something on the table and sometimes he gets even more."

Jalen Hurts passed for 163 yards and a touchdown, rushed for 63 yards and a score and caught a touchdown pass for the Sooners (11-1, 8-1 Big 12) in their fifth consecutive victory in the series.

Oklahoma has won 21 consecutive November games dating to 2014. The Sooners will play Baylor in the Big 12 championship game next Saturday.

Oklahoma State's Chuba Hubbard, the nation's leading rusher, ran for 104 yards and a touchdown for his 10th consecutive game with at least 100 yards rushing.

He entered the game averaging 166.5 yards rushing per game.

"They were putting safeties down in there, so we tried to throw it more," Oklahoma State Coach Mike Gundy said. "Once we got down by more than a score, they could be more aggressive and we had to throw it more and became a one-dimensional team."

Oklahoma held Oklahoma State to 335 yards. Parnell Motley led the way for the Sooners with an interception, two forced fumbles and a fumble recovery.

Oklahoma State's Matt Ammendola made a 25-yard field goal at the end of the first half to cut Oklahoma's lead to 20-13.

Oklahoma went ahead 27-16 on a 93-yard drive that Brooks capped with a 3-yard touchdown run.

With Oklahoma still up 27-16, Oklahoma State took a chance by going for it on fourth-and-three at the Oklahoma 27, but Dru Brown's pass fell incomplete. Oklahoma stopped the Cowboys again on fourth down in the fourth quarter.

SALT LAKE CITY -- Brant Kuithe scored three touchdowns and No. 6 Utah is locked up a spot in the Pac-12 championship game for the second consecutive season with a victory over Colorado.

The Utes (11-1, 8-1) needed a quarter to get rolling in 25-degree temperatures, but romped to their eighth consecutive victory. Tyler Huntley was 14-for-17 for 165 yards and connected with Kuithe twice for touchdown receptions.

The Buffalo defense keyed on Zack Moss and made it tough to run between the tackles, but the all-time Utah rushing leader tallied 88 yards on 20 carries and scored on a 1-yard run to put the game away in the fourth quarter and set up Utah's matchup against No. 14 Oregon on Friday in Santa Cara, Calif.

Steven Montez threw for 157 yards on 17-of-26 passing for Colorado, setting two major career records as he eclipsed Sefo Liufau on the Colorado passing (9,649 yards) and total offense (10,614 yards) lists in his final game.

Kuithe caught touchdown passes of 38 and 7 yards and ran 15 yards for a score. The tight end also 44-yard run on a jet sweep.

Charlie Brewer threw for 182 yards and a touchdown as Baylor (11-1, 8-1 Big 12) equaled the school record for wins in Matt Rhule’s third season as coach. Trestan Ebner, Gerry Bohanon, Qualan Jones and Jacob Zeno also rushed for TDs as the Bears piled up 263 yards on the ground.

Only three times since the program’s founding in 1899 have the Bears won 11 games in a season.

Next up for Baylor is the Big 12 championship game Saturday against No. 7 Oklahoma. The Sooners beat the Bears 34-31 on Nov. 16.

Will Levis played quarterback for the Nittany Lions (10-2, 7-2 Big Ten) in place of injured started Sean Clifford and added 108 rushing yards on 17 carries and a 42-yard touchdown pass to Jahan Dotson in the fourth quarter. Isaih Pacheco led Rutgers (2-10, 0-9) with 102 yards rushing on 18 carries and Johnny Langan completed 12 of 24 passes for 164 yards with 58 rushing yards.

Quintez Cephus caught five passes for 114 yards, including a 47-yarder for a score midway through the third quarter that gave Wisconsin (10-2, 7-2) a 17-7 lead. Coan connected with Taylor for a 28-yard touchdown strike late in the second quarter that gave the Badgers the lead after a slow start, sending them to the Big Ten championship game for a rematch with Ohio State.

Tanner Morgan passed for 296 yards and two touchdowns for the Gophers (10-2, 7-2). They watched their dream season take a painful hit from their oldest rival after ending a 14-game losing streak to the Badgers a year ago with a 37-15 victory at Wisconsin.

Minnesota was seeking to go undefeated at home for the first time since 1954, but the Badgers reasserted their recent dominance by taking home the traveling trophy for the 22nd time in the last 25 seasons.

EUGENE, Ore. — Justin Herbert threw for 174 yards and a touchdown in his final game at Autzen Stadium and Oregon held off Oregon State in the 123rd Civil War rivalry game.

Oregon (10-2, 8-1 Pac-12) wrapped up the regular season with a perfect record at home for the eighth time. The Ducks reached 10 wins overall for the first time since 2014.

Oregon was cruising toward a possible bid in the College Football Playoff last weekend when it was upended 31-28 at Arizona State. Oregon was already assured of a spot in the Pac-12 championship game Friday in Santa Clara, California.

Oregon State (5-7, 4-5) was denied a bid for bowl eligibility in Coach Jonathan Smith’s second year. The Beavers haven’t made a postseason appearance since 2013.

Book threw two TD passes to Chase Claypool and also connected with Tony Jones Jr. and Tommy Tremble to help the Fighting Irish (10-2) snap a five-game losing streak at Stanford Stadium. Notre Dame also put together three consecutive seasons of at least 10 wins for the second time in school history, having previously done it under Lou Holtz from 1991-93.

Davis Mills threw two TD passes for the Cardinal (4-8), who have lost four in a row for the first time since 2007. Stanford also finished with its first losing record since 2008, ending a streak of 10 consecutive bowl bids.

MANHATTAN, Kan. -- Jordon Brown and Jacardia Wright ran for touchdowns, Joshua Youngblood took a kickoff back 93 yards for another score, and Kansas State beat Iowa State in a defensive slugfest.

The Wildcats (8-4, 5-4 Big 12) only managed 57 yards passing and 288 yards of total offense, but they scored the final 13 points while holding the Cyclones' high-powered offense in check.

Brock Purdy was just 15 of 30 for 185 yards passing and a touchdown, and the Cyclones (7-5, 5-4) finished with 236 yards in all. Their biggest problem came in converting third downs -- they were 1 of 13 -- and that in turn led to a massive advantage for Kansas State in time of possession.

The result: The Wildcats beat the Cyclones for the 11th time in 12 meetings.