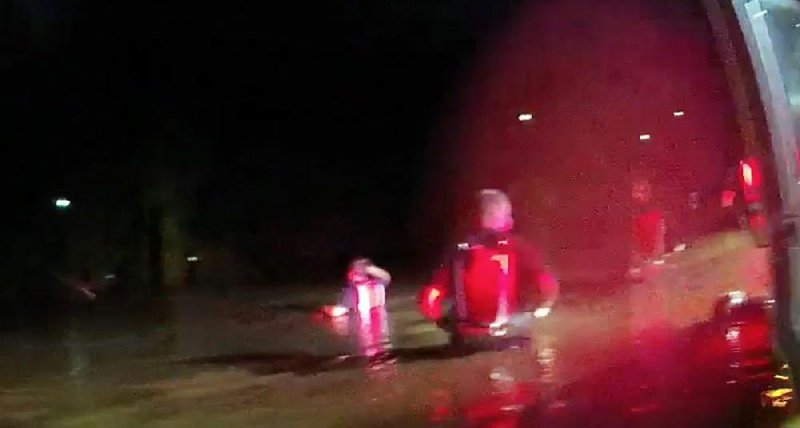 This screen shot from a Fort Smith police officer’s body camera shows responders walking through a flooded area near where Debra Stevens drowned early Saturday before the rescuers could get to her.

FORT SMITH -- A woman's drowning death while on the phone with a Fort Smith dispatcher as police sought to reach her vehicle in floodwaters Saturday has led to an internal investigation into the dispatcher's actions.

Fort Smith received just over 4 inches of rain early Saturday, causing a flash flood that swept 47-year-old Debra Stevens' vehicle out of a parking lot and into a grove of trees.

A recording of her 911 call released Thursday morning indicates that Stevens, who was delivering newspapers at the time, was on the phone with dispatcher Donna Reneau for more than 24 minutes as water crept into and over her vehicle.

In the recording, Stevens' voice was loud and panicked as she pleaded with Reneau to save her.

Reneau asked Stevens for her location and worked to coordinate police officers searching for the submerged SUV. But, while doing so, Reneau told Stevens at one point to "shut up" and chastised her for driving into floodwaters.

As the phone call drew to an end, Reneau called Stevens' name, but heard only the sound of lapping water in response.

The Arkansas Democrat-Gazette will not publish the entire 911 recording released to the media because it includes graphic and disturbing content.

"I understand that listening to a person going through the panic that Mrs. Stevens was in the final moments of her life, we would all hope that we would get a better response than what she was given," Fort Smith interim Police Chief Danny Baker said Thursday.

[Video not showing up above? Click here to watch » https://www.youtube.com/watch?v=hRGqseO-kA]

Baker said the department is investigating, and looking at dispatcher training and policy to see how it could have trained Reneau to better handle such a traumatic situation.

"Also know that we were working diligently to get to [Stevens]," Baker said. "The men and women involved in that incident, this will be something they have to deal with for the rest of their lives."

Reneau, who won a dispatcher-of-the-year award during her five years with the Fort Smith department and had trained other dispatchers, had given the department her resignation notice two weeks earlier and was working her last shift Saturday, the chief said.

Baker said Thursday that when Stevens called 911 at 4:38 a.m., she was crying and afraid after floodwaters swept her car from a parking lot near 5801 Kinkhead Ave. That call may have been Reneau's last emergency phone call of the night, he said.

"I couldn't see the water, and there was water everywhere," Stevens tells Reneau in the 911 recording. "It just took me away and started pulling me, sucking me in, and my car died."

At that moment, nine officers were on patrol in Fort Smith, which has some 88,000 residents. The department is currently trying to fill 10 vacancies, and 25 of the city's 154 officers are still in training and not yet handling calls, Capt. Wes Milam said Thursday.

All nine of the officers were busy on other calls when Stevens reached the dispatcher. Reneau told the frantic Stevens that she would have to wait.

"You're not going to drown," Reneau replies. "Just calm down."

Two minutes into the phone call with Stevens, Reneau entered the information into the computer-aided dispatch system, which allows dispatchers to coordinate with officers.

Reneau tried to determine Stevens' exact location. She asked Stevens what she was seeing and what was around her. Stevens became more panicked, and said there were people in the apartment complex watching her but not helping as the water in her vehicle reached to her chest.

"You're not going to die. I don't know why you're freaking out," Reneau says.

"When are they going to get here?" Stevens asks later.

"When they get there," Reneau replies.

"Will you pray with me?" Stevens asks the dispatcher later in the call.

"You go ahead and start off the prayer, and I'll listen," Reneau says. "I sure will."

"I'm sorry if I'm being rude, I'm just scared," Stevens says. "I've never had anything happen like this before."

"Well this will teach you next time don't drive in the water," Reneau says. "I don't see how you didn't see it. You had to go right over it, so."

The phone call lasted 24 minutes, and Reneau worked to calm Stevens, saying her panic was only exacerbating an already tense situation.

At 4:50 a.m., police and Fire Department personnel arrived at the scene but could not find Stevens' vehicle. Milam said that although the dispatchers were tracking Stevens' phone, the cellphone towers do not give a specific location of the phone, only an area.

"The impression is if you have a cellphone, we know where you are at," Milam said. "That is not the case."

Instead, officers were searching in the dark among grass and trees between two apartment complexes, looking for a car that was almost covered in water.

Milam said there were vehicles in the parking lot, and many were in deep water. At first, officers were unable to find Stevens' SUV where it had floated into the trees. Water had risen to the vehicle's roof.

When they found the SUV, the current was fast and the water too deep for an officer to wade out to Stevens, Baker said. One officer shucked off his gear and vest, ready to venture out into the water to help Stevens, but Baker said it was too dangerous.

"He wouldn't have survived," Baker said. "They realized with the water moving that fast, they couldn't get to the car."

Stevens told Reneau that the water was above her vehicle's window, she couldn't see if police had arrived and couldn't hear any firetruck sirens. Reneau asked her to honk the SUV's horn, but the vehicle was dead.

"Listen to me, they're trying to find you," Reneau says.

Stevens said the SUV was starting to move and she screamed, saying she couldn't breathe.

"Mrs. Debbie, you are breathing just fine because you are screaming at me," Reneau says. "I need you to calm down."

Stevens' voice then becomes unintelligible, and seconds later the phone gurgles. Reneau calls Stevens' name numerous times before speaking to an officer who is looking for the vehicle.

"Oh, my God, it sounds like she's under water," Reneau says.

At 4:59 a.m., the responders requested a swift-water rescue boat. Responders at 5:04 a.m. put on life vests and used ropes to try to get to the SUV, but couldn't reach it.

At 5:16 a.m., rescuers boarded the boat and, 42 minutes later, they got to Stevens' vehicle and removed her body, the Police Department timeline said. Medics performed CPR, but Stevens was dead.

Baker said Thursday that it is obvious that Stevens' call was not prioritized and he believes that was a judgment error. The dispatcher did not "understand the severity of what was going on."

In the news conference, Baker said he understood the frustration that the community must feel, but he asked that people remember how difficult and stressful such phone calls can be.

Reneau's "actions were obviously less than could be desired, but I want us to think ... that this is a dispatcher who is several miles from what's happening," Baker said. "All that she knows is what is being told her by the other person on the other end of the line."

Milam, who worked in dispatch for several years and now leads the support services division, said he knows Reneau, and how Reneau reacted to Stevens' call was out of character.

Baker said he spoke to Reneau on Saturday, hours after the 911 call, and she was upset. The department has mental-health services available for dispatchers and officers who undergo traumatic experiences, and Baker said he extended an offer of those services to Reneau.

CORRECTION: An earlier version of this story misspelled the Fort Smith dispatcher's name. The dispatcher was Donna Reneau.