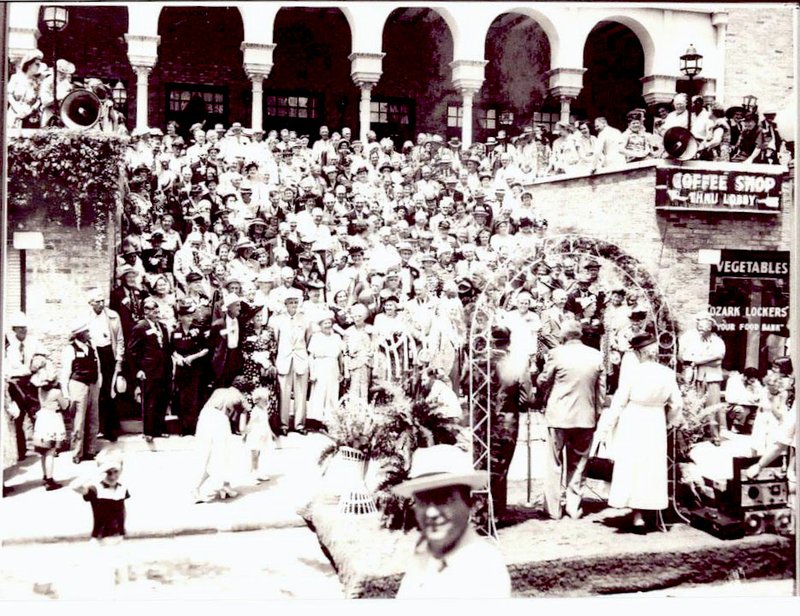 Photo courtesy Kay Calvin Sanford In June of 1949, the Chamber of Commerce sponsored an Ozarks Golden Wedding Jubilee honoring couples married 50 years or longer. More than 117 couples from all over the country assembled on the steps of the Hotel Arkansas to "reaffirm" their wedding vows.

By far the most impressive structure in downtown Rogers is the five-story Spanish Colonial style building on the corner of Poplar and Second streets. Built in 1928 as the luxurious Lane Hotel, it has done business as the Harris Hotel, The Hotel Arkansas and several retirement homes. Many people who grew up in Rogers and their children and newcomers wonder about this fascinating place, and I was inspired to recount details of this fascinating historic building when local historian Randy McCrory posted an old picture on his Facebook site, Historic Benton County, of the lobby of the Lane Hotel when it was new.

The Lane Hotel cost $150,000 and opened with much fanfare, but the timing was catastrophic: The Great Depression started the next year. People did not have money for a fancy hotel, and it failed soon afterward. During the Depression most businesses struggled or failed, but two blocks away on Walnut Street, one business thrived. Earl Harris started the Harris Bakery in the same year that the big hotel was built. Harris was producing bread for 10 cents a loaf and shipping it to grocery stores all over Northwest Arkansas. It was cheaper to buy bread during the Depression than to make your own.

In 1935, Earl Harris bought the bankrupt Lane Hotel for $100,000. He changed the name to the Harris Hotel and turned it into the cultural center of Northwest Arkansas. In 1936, Harris built a new bakery just north of the Harris Hotel that was advertised as the most beautiful bakery in America. The two properties joined in the back, and Harris used the steam from the hotel heating system to heat his new bakery.

The hotel was located between the bus station on Second Street and the train depot on First Street and was the place to stay. Traveling salesmen, tourists, movie actors and even college football teams who came to play the Arkansas Razorbacks were guests. Some of the occupants who have stayed at the Lane include aviator Amelia Earhart, boxer Jack Dempsey and actors Errol Flynn and Henry Fonda.

The Harris was the largest and nicest hotel between Kansas City, Fort Smith and Little Rock and was billed as "The Palace of the Ozarks." Many famous bands played in the spacious ballrooms, and people from all over Rogers, not lucky enough to be invited to the events, would come and sit on the curb and enjoy the great music.

The lobby of the hotel was always buzzing with activity.

"People were always hanging around the lobby, including many local citizens who wanted to be a part of the excitement. On the left of the lobby was a shop that sold newspapers and other items and had a shoeshine stand. A room further west on the lobby floor was a fairly large room for piano recitals and other functions. Off the lobby to the right was a large room where dances, balls, wedding receptions and other social activities were held. At the time before World War II, Rogers was wet, and if a hotel guest wanted a drink, he would tip a hotel employee to get a bottle of liquor from the liquor store across the street. The Harris Hotel was the center of social activity in Northwest Arkansas." (From an interview with Pat Harris, Earl Harris' son, May 5, 2007)

When Earl Harris acquired the hotel, the dining area was a large ballroom on the front. Harris built a nice restaurant on the back of the hotel in 1939 called the Orchard Room. Kay Calvin Sanford's father, Forrest Calvin, was the manager of the hotel from 1943 until 1958. Kay grew up in the hotel and wrote about her experiences. "Our apartment at the hotel didn't have a kitchen, so we were forced to eat all of our meals in the lovely Orchard Room located just upstairs. I suppose you could say I was kitchen deprived. The Orchard Room was a gathering place for the business people of Rogers -- judges, attorneys, doctors, store owners and managers, real estate and insurance agents -- all ate there sometime during the day."

Many folks who grew up in Rogers shared fond memories of the hotel on Facebook:

Rebecca Musteen Johnson: "In the late 1930s or early 1940s, Joe Head (part of the family, who later built Susie-Q Drive In), would stop his horse-drawn wagon by the hotel to pick up leftover food from the dining room. It was food for his pigs ... kept north of Rogers. Dad, his identical twin (Jack Musteen), and their best friend, Tom Hughes, would ride in the wagon with Mr. Head."

Judy Epps: "My mom, Ruth Best, was a waitress and my dad, Gene Pool, was a bellhop there in the '40s, and I was a cook there when it was the Townhouse in '78.

Kenn Wolfe: "This was the first place that my parents and other Daisy BB Gun plant supervisors and their wives stayed in 1958 when they visited Rogers from the soon-to-close Daisy plant in Plymouth, Mich. They came to see the area where the new Daisy plant was being built, for their families would soon be moving to Northwest Arkansas."

Linda Thrasher: "I attended the 'Blue Demon Ball' at the hotel when I was in the seventh grade. ... I remember the ballroom being so huge, with high ceilings and chandeliers." Others who contributed happy memories of the Pep Club dances in the hotel: Carol Osbun Beaman, Joe Don Dickhut, Patty Thompson, Judy Sypult and Kathy Williams Neal.

Earl Harris sold the hotel in 1948 to Warren Felker, who renamed it the Hotel Arkansas. The hotel continued to be successful in the 1950s, but business started to fall off in the 1960s as new motels sprang up along U.S. 71 in Rogers. The famous old "Palace of the Ozarks" closed July 15, 1963. The building continued service as a retirement home until 2004. From then until 2015, the majestic old building was vacant and deteriorating. Those of us who love Rogers were afraid of losing the historic imposing structure and had little hope of saving it because of the tremendous cost to renovate and bring the building to code.

Finally, in 2015, along came the Walton Family Foundation, which purchased the historic building for $1.6 million and began renovating it for a Haas Hall school. According to their website, the Rogers' location was completely restored in 2017, and this unrivaled facility became home to Haas Hall Academy Rogers, considered one of the finest charter school facilities in the nation. In its second year of operation, Haas Hall Academy at The Lane builds upon our state and national academic accolades and has some of the highest test scores in the state.

As a lover of Rogers, I am so happy that the Walton Family Foundation decided to save the historic hotel. No expense was spared inside or out to refurbish the building into an ultramodern school, while keeping the historic charm and atmosphere. The exterior, lobby, stairs, ballroom and Orchard Restaurant are just as when built in the 1920s and 1930s. The check-in desk, fireplace, tile floor, hand-carved wooden beams and even the ceiling fan lights are all original and perfectly preserved. Earl Harris would be proud of the new life for his "Palace of the Ozarks."

Much interest has been expressed in seeing the fabulous lobby of the historic hotel, so I contacted the school and asked if the public could come and visit. The school representative was open to visitors as long as students were not distracted. She said the best time was between 8:30 and 10:30 a.m. and between 12:30 and 2:30 p.m. Visitors have to ring a buzzer at the front door to be admitted.

Print Headline: Check in at the Lane