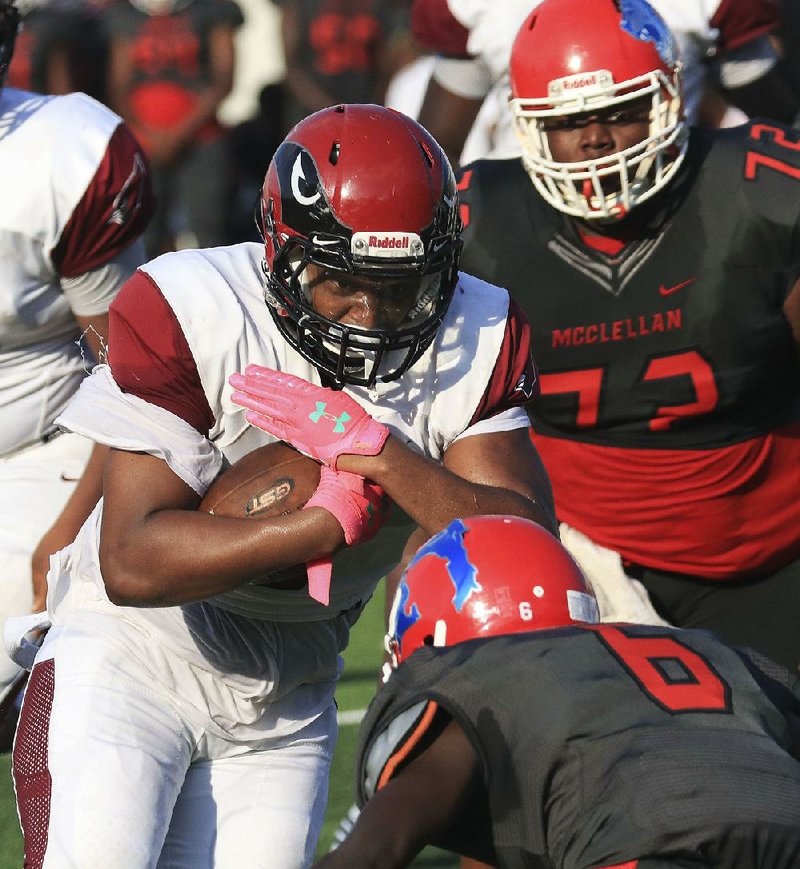 Mistakes plagued both Little Rock McClellan and Pine Bluff Dollarway on Monday, but the Lions did enough to escape with a victory.

Senior defensive lineman Erick Jenkins returned an interception 72 yards for a touchdown with 5:12 left in the third quarter to give McClellan the jolt it needed during an 18-14 victory in a mistake-prone opener at War Memorial Stadium in Little Rock.

"Definitely ugly," McClellan Coach Maurice Moody said. "You want to start out 1-0, but I bet we had over 150 yards in penalties. We can't play like that.

Dollarway committed 19 penalties for 211 yards and turned the ball over 5 times; McClellan accumulated 114 yards on 13 fouls and lost 3 fumbles.

Junior qurterback Jordan Harris carried 15 times for 51 yards and 2 touchdowns for McClellan (1-0). Senior running back Jeremiah Aikins added 79 yards rushing on 15 carries for the Lions, and Jenkins finished with a team-leading 8 tackles.

Senior running back Terrance Brown ran for 24 yards on 17 carries for Dollarway (0-1), which had only 89 yards total.

"We let this one slip away, and I take full responsibility," an emotional Dollarway Coach Martese Henry said afterward. "I loved the way the guys played for four quarters, never gave up. We had a few mistakes here and there that we're going to polish up and iron out.

"[McClellan] is a quality powerhouse team, but overall I'm happy with what I saw out there."

After being forced into a three-and-out inside their own 5-yard line on their second series, the Cardinals shanked a punt that traveled 9 yards. Three plays later, Harris scored on an 8-yard run to give the Lions a 6-0 lead.

McClellan struck again after recovering a Dollarway fumble inside its 30 on the next offensive snap. Harris capped a three-play, 26-yard drive with a 1-yard score with 11:28 left in the second quarter.

Dollarway forced and recovered fumbles on three consecutive possessions, two of which resulted in touchdowns. Senior linebacker Reggie Lee returned the first takeaway 66 yards for a score to cut the Lions' lead in half with 9:14 to go in the quarter.

On the ensuing kickoff, Dollarway sophomore defensive back Braveon Sample pounced on the ball after McClellan sophomore returner Joshua Brown bobbled it near the sideline. Brown plowed in from 6 yards out moments later, and junior running back Cherondric Broyles followed with the two-point conversion to put the Cardinals ahead 14-12.

The miscues continued in the second half for both teams, but Jenkins' interception return off a deflected pass put the Lions ahead for good.

Moody wasn't thrilled with his team's performance, but he's looking forward to watching his team's progression.

"The good thing about it is that we're playing in Zero Week," he said. "We've got a few weeks before we play again, so we'll be able to clean this thing up." 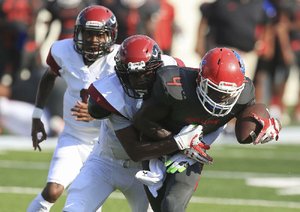