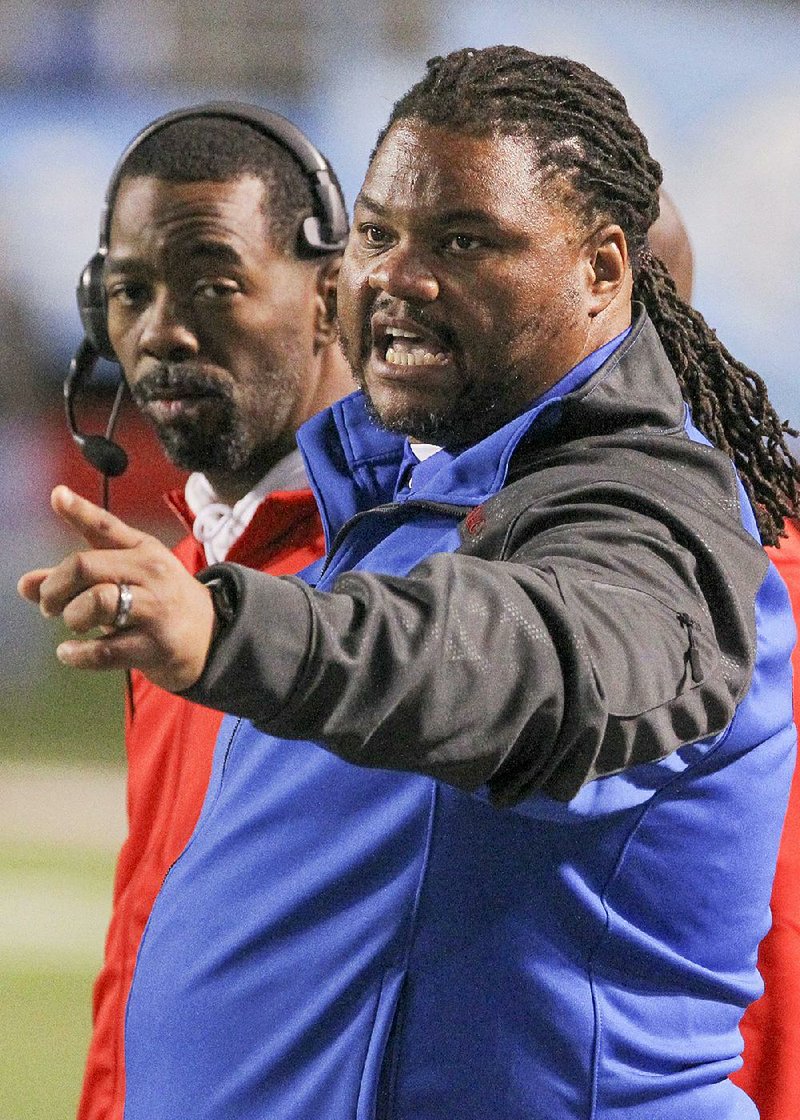 McClellan football coach Maurice Moody talks to his team during the 5A High School Football State Championship against Pulaski Academy.

Little Rock McClellan and Pine Bluff Dollarway will get the honor of being the first two teams to play a varsity contest in the 2019 season.

The Crimson Lions and Cardinals will play at 5 p.m. today in the first game of a doubleheader at War Memorial Stadium in Little Rock. Des Arc will face England in the nightcap, scheduled for 7:30 p.m.

McClellan Coach Maurice Moody is looking forward to being part of the state's first game of the season.

At War Memorial Stadium, Little Rock Central meets West Memphis at 5 p.m. and is followed by Nashville vs. Watson Chapel at 7:30 p.m.

In Magnolia, new coach Mark King will lead Magnolia against Class 4A state power Warren at 5:30 p.m. Prescott, the Arkansas Democrat-Gazette's preseason No. 1 team in Class 3A, faces Class 3A No. 4 team Rison at 7:30 p.m. in the second game.

McClellan and Dollarway are playing for the second consecutive season at War Memorial Stadium. The Crimson Lions won last year's matchup 55-0, and Moody recalled the joy his players had about playing in the Little Rock home of the Arkansas Razorbacks.

"The kids were excited," Moody said. "They had fun. It was an amazing event. We can't wait to play on Monday night."

Throughout fall camp in August, temperatures have been in the 90s with heat indexes reaching over 100 degrees in some parts of the state. Moody believes that the warmer weather could benefit his team entering today's game.

"It was a scorcher every single day," Moody said. "It's definitely prepared us for a 5 p.m. kickoff. Last year, we had the shade with the press box over us [on the west side of War Memorial Stadium]. This year, we'll be in the sun since we're the visiting team [on the east side]. But we're excited."

It's the final season opener for McClellan's football program. McClellan and Little Rock Fair will close after this school year, and students from those schools will attend a new high school in the Little Rock School District in southwest Little Rock. That high school will be Class 7A in football, so McClellan and Fair football players will be playing two classifications up from their current situation in Class 5A.

For Moody, he understands what this final season means for McClellan, which is the Democrat-Gazette's preseason No. 5 team in Class 5A.

"There's excitement, but it's also an emotional roller coaster," Moody said. "The seniors are excited to play the last season at McClellan. You look at the underclassmen and they're excited to play at the new school.

"We're going to go out and play as hard as we can play. We're going to try to go 1-0 every single week. We can make southwest Little Rock proud."