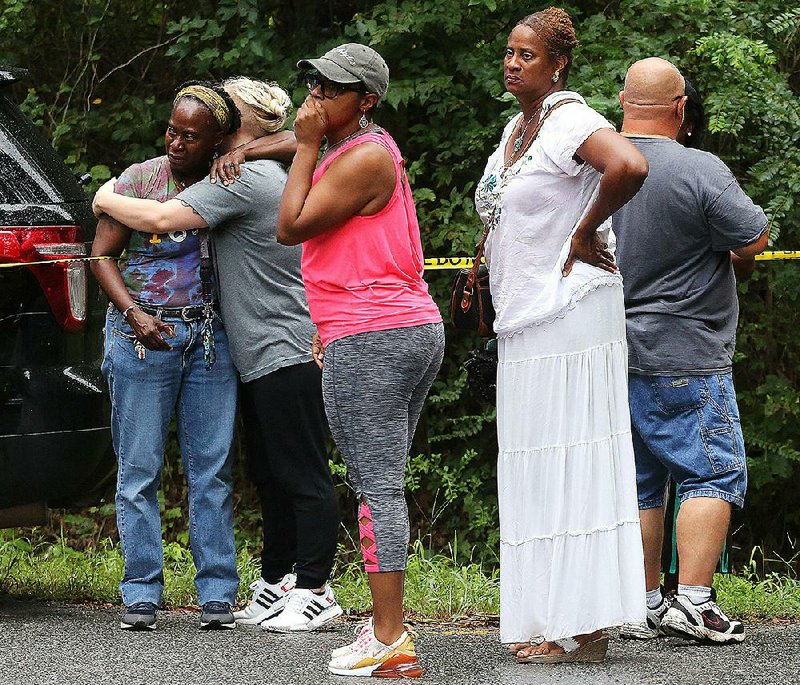 Relatives and friends look on Saturday as Pulaski County sheriff’s deputies investigate the beating death of a Sweet Home man. The man’s son has been arrested in the case, deputies said. - Photo by Thomas Metthe

A Sweet Home man was arrested Saturday morning in the bludgeoning death of his father during an argument, Pulaski County sheriff's office officials said.

A 911 caller at 11:12 a.m. Saturday reported family members fighting near 3525 Neely Road. When deputies arrived, they found Derrick Goodman lying on the gravel driveway near the residence, according to sheriff's office spokesman Lt. Cody Burk and an arrest report.

Goodman's son, Bryant Goodman, 39, was near the body "saturated in blood," the report said.

"I had to defend myself," Goodman told deputies, according to the report.

Deputies arrested Bryant Goodman and said he refused to cooperate with investigators. Derrick Goodman's age was not included in the report.

[Video not showing up above? Click here to watch » https://www.youtube.com/watch?v=Z4MQMb2Wjxc]

Tall trees along Neely Road prevented the onlookers from seeing more than the top of the tall metal building where Derrick Goodman lived. A 6-foot-tall, chain-link fence edged in barbed wire surrounds the residence and displayed several "Do Not Enter" signs.

A driveway curves around the side of the building, which property records show is a two-story home built in 1965. Derrick Goodman's body was found in the gravel east of the house, Burk said.

Family members' vehicles lined Dan Thomas Road, and one woman rested her head on the side-view mirror of a deputy's patrol car and cried.

When deputies near Dan Thomas Road lifted the yellow tape to let a coroner's van pass through at 1:20 p.m., the woman began to wail and her knees to buckle. The people around her kept her from hitting the ground.

Thunder clapped and the rain grew hard as the family members waited for news of what had happened.

The building at 3525 Neely Road, along with the 34 acres surrounding it, are listed under Derrick Goodman's name, according to Pulaski County property records. Bryant Goodman's arrest report lists that address as his residence.

Bryant Goodman has no previous arrests, according to court records.

The slaying was the second homicide that Pulaski County deputies have investigated in three days.