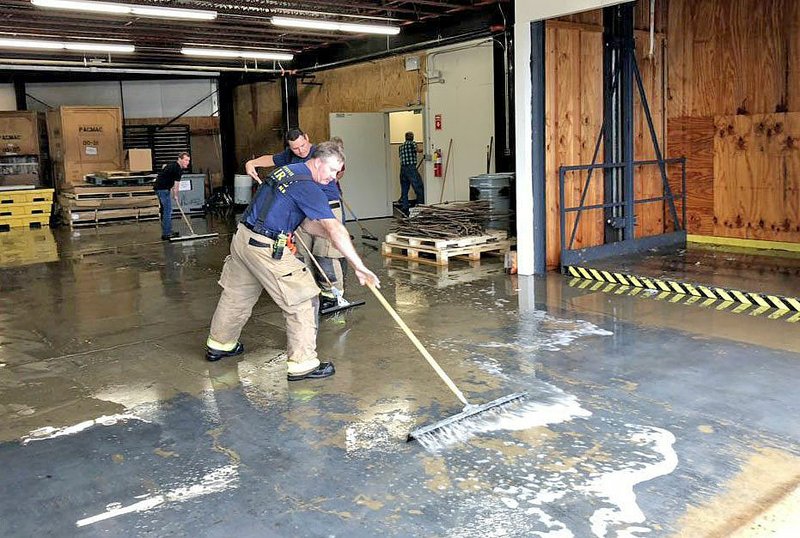 NWA Democrat-Gazette/STACY RYBURN Fayetteville firefighters help to push water out of a business Thursday in Fayetteville. A water main near the business ruptured shooting water into the business.

FAYETTEVILLE -- A broken water main surprised employees Thursday at a packaging company's office in the south part of town.

A 12-inch water main ruptured about 9:30 a.m. near Packaging Specialties, 1663 S. Armstrong Ave. A 3-foot-split in the cast iron pipe shot water at the building, inundating the outside and interior, said Tim Nyander, the city's utility director.

"Not only did it hit the roof from the top, but it went underneath the eaves," he said.

No work was going on near the pipe at the time of the break, Nyander said. Breaks are common occurrences for old cast iron pipes, he said.

"There are all kinds of things that could've happened with the water movement; you just don't know," he said.

Cindy Carr was working in her office when water started gushing at her closed window.

"We heard something blow, but we didn't know what it was," she said. "Then, of course, we saw the water. It sounded like the window was going to bust, so that's when I grabbed my stuff and took off outside."

The spurt lasted about 25 minutes, Carr said. Outside, she sifted through framed pictures of her family. Water found its way into some of them. Carr said she wasn't worried because she has copies.

Other employees said they were glad the break happened during the work day when people were around to call authorities.

The business was the only one affected, Nyander said. Crews shut off the water and waited for an assessment of the lines running underground before digging. Firefighters used squeegees in the flooded loading area and a restoration company was in charge of drying out the carpets.

Most employees left by 11 a.m.

Nyander said it was too early to estimate the damage or the gallons of water lost. The company can file a claim with the city within 30 days, he said.

Packaging Specialties makes polythylene films to package food products, according to its website.