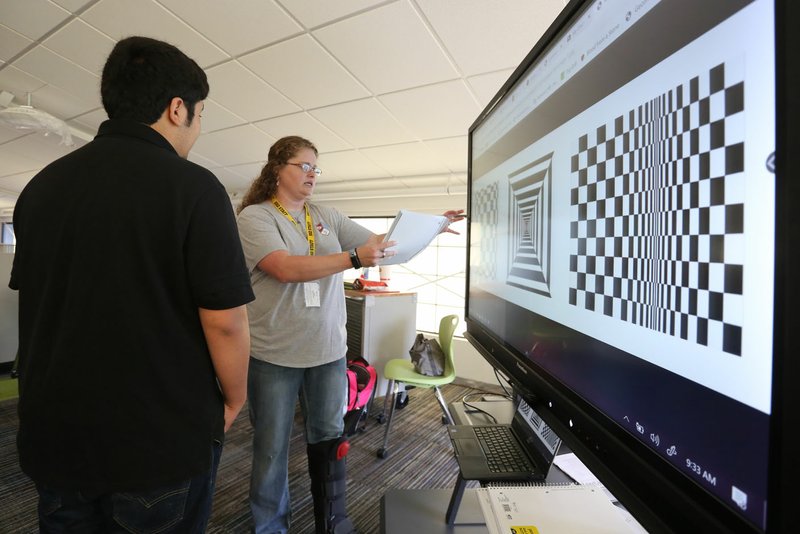 NWA Democrat-Gazette/DAVID GOTTSCHALK Chrystal Becker, math collaboration teacher, works Friday with a student at the new Archer Learning Center in Springdale. The center is in the former Springdale Recreation Center at Murphy Park. Renovation included the addition of open classrooms, a new cafeteria and the conversion of gym space into learning areas.

"Kids are a lot more interested when it feels like the space is made for them," he said.

Northwest Arkansas’ largest school districts in recent years have made facility changes for their alternative education programs at the high school level.

Bentonville: Moved its Gateway program this year from Southeast 14th Street to a section of the second floor of Bentonville High School. The cost was negligible; the district needed only to add signs and a sidewalk at the school, according to district spokeswoman Leslee Wright.

Fayetteville: Spent about $500,000 in 2015 to improve its building on Old Farmington Road housing the Agee Lierly Life Preparation Services program.

Rogers: Constructed a building on North Second Street in 2017 for its Crossroads Learning Center for about $3.5 million.

The district bought the building from the city in December for $2.2 million while selling Archer's former home on East Meadow Avenue to Recasting LLC, also for $2.2 million.

District employees partnered with Milestone Construction, a Springdale firm, to renovate the building. The renovation cost isn't final, but officials expect it won't exceed $1.9 million, according to Jared Cleveland, a deputy superintendent.

Renovation started in May. The work isn't finished, but it was close enough by the start of school last week to open the doors for staff and students.

Jeremy White, the district's director of facilities, toured the building with other administrators and School Board members Tuesday.

"It was a big transformation," White said.

He estimated district employees did about 30% of the renovation, including all of the flooring and some of the roofing work and the heating and air conditioning work.

Sam Hollis, president of Milestone, said the company was happy to partner with the district.

"The summer was a pretty short window for us to get in there and work. But we worked really well together," Hollis said.

Hector Rojas, 17, is an Archer senior. The new facility is a big improvement on the old one, he said.

"I feel more comfortable in this building. I like it a lot more," Rojas said.

Davis, while leading a tour, stood in the hub and motioned toward groups of students seated around tables.

"I know you can hear a roar in this space," Davis said. "But if you look at these kids here, they're not struggling to be a part of that conversation, even though we can hear all these other parts. You see all these things happening, and I can hear them, but they're still existing in isolation."

Still, classes sometimes need a quieter environment. Such was the case Friday when Shelley Aschliman, a 12th-grade English teacher, led her students to a table in the otherwise empty cafeteria for a discussion.

It's new to Nick Rhoads, who's worked at Archer for five years and teaches Jobs for Arkansas Graduates as well as some business classes.

"There are definitely some challenges with any campus with the open-air concept. There's student traffic. There's no walls that would isolate sound," Rhoads said.

The district retained one of the building's gymnasiums. Archer students previously did not have a gym of their own.

"I think our students really need extracurricular activities and things to do outside of just being in a classroom. So I'm excited," Rhoads said.

Kyle Frank, in his second year as a math teacher at Archer, is glad to have ample natural light, something the old facility lacked.

"We love our new space," he said. "I think the kids will like it a lot more. They're getting used to it."

Davis said the goal is to achieve student growth and personalization of learning and allowing alternative methods of teaching should support that goal.

The Arkansas Education Code defines alternative learning environment as a class or school that "seeks to eliminate barriers to learning for students whose academic and social progress are negatively affected by the student's personal characteristics or situation." Students may be drawn to a place such as Archer because they're behind on credits or because they struggle in a traditional high school environment.

Archer has about 220 students, but enrollment will increase to about 300 over the next month or so as the district does its admissions process, Davis said.

Archer has 28 teachers. The state mandates alternative learning environment classes not exceed a student-to-teacher ratio of 15-to-1.

"It's really just a safety precaution," he said. "We try really hard to still make it positive, so it doesn't feel like something that is prohibitive to them being excited to be here. We have had no problems, but maybe that's because we have a metal detector."

A message painted on the wall of the conference room states, "At Archer we teach them all" -- a reminder every individual deserves quality education, said Superintendent Jim Rollins.

"It's great to see those kids who really are needing a nontraditional setting have a facility where they can pursue their great potential and promise. I'm really excited about what I see. It's just going to get better and better," Rollins said. 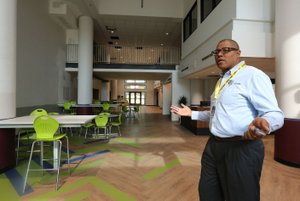 NWA Democrat-Gazette/DAVID GOTTSCHALK Principal Coby Davis describes Friday the uses for the new Computer Cafe at at the Archer Learning Center in Springdale. The center is in the Springdale Recreation Center at Murphy Park. The district bought the building from the city in December for $2.2 million while selling Archer's former home on East Meadow Avenue to Recasting LLC, also for $2.2 million. 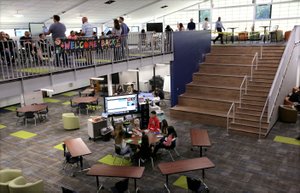 NWA Democrat-Gazette/DAVID GOTTSCHALK Multiple classrooms share space with the addition of a second floor and in the renovated gym at the new Archer Learning Center in Springdale. District employees partnered with Milestone Construction, a Springdale firm, to renovate the building. The renovation cost isn't final, but officials expect it won't exceed $1.9 million, according to Jared Cleveland, a deputy superintendent.