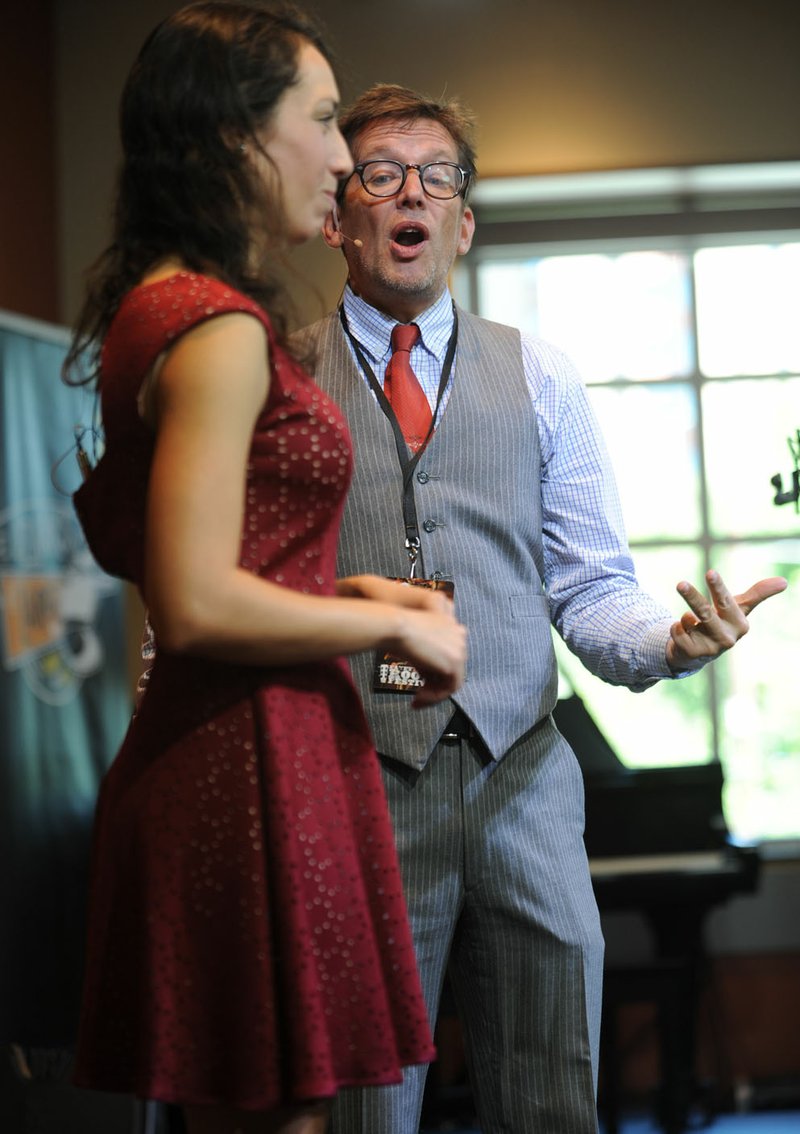 File Photo/ANDY SHUPE Kyle Kellams (right), news director at KUAF, chats with co-host Antoinette Grajeda during a live broadcast of "Ozarks at Large" as part of a previous Fayetteville Roots Festival. The two-hour show at the Fayetteville Public Library is one of the places fans can hear a lot of great roots music even if they don't have tickets to the festival.

Like everything else about the festival, KUAF's annual live broadcast of an all-Roots "Ozarks at Large" started because Bryan Hembree had a vision.

"As I remember it, Bryan called me with 'an idea' about six weeks before the festival in 2012," says Kyle Kellams, news director for the National Public Radio affiliate. "He wanted to do a live radio show as part of the festival. I was into it, the Fayetteville Public Library was into it -- so we did it."

"KUAF helped emcee the main stage for the first time in 2011, so we already had a relationship," adds Antoinette Grajeda, KUAF reporter and co-host for everything Roots related. "Hosting it at the library made us more comfortable trying a new live broadcast; we hadn't done many at that point. The library has quality technology, a team to help and is located across the street from our office."

"We did live coverage in 2011 of the opening of Crystal Bridges Museum of American Art in Bentonville," Kellams puts in. "But a full-scale radio show like this was a first."

It didn't take long before everyone knew they had a hit on their hands.

"You know, when the Steel Wheels hit the first note of their first song that first year, I knew this was something," Kellams muses. "But when the line to get in to be part of the audience began wrapping around the library lobby a couple of years later -- then I knew!"

The first year, the live show was an hour, Kellams remembers.

"The next year was two hours, but still just the first hour live on air. Since then we've broadcast a two-hour show live on the radio every August."

It's been tradition that at least some of the performers for the KUAF live show remain a secret -- "We like to have some unknowns and some known" -- although Kellams says keeping Iris Dement a secret was a challenge. But there's also "some conversation. We've had food and beer tastings and some of our usual 'Ozarks at Large' guests. If there is something else happening with the festival -- an author, a chef -- that we can include, we do."

This year, the show is expected to host the Cate Brothers, Milk Carton Kids and Amy Helm -- with surprise additions likely, of course.

Kellams adds that one of the best moments actually happened because a guest musician didn't show up -- the only time that's occurred, he says.

"Antoinette asked if a previous performer would finish the show. Joe Crookston just was amazing on a second's notice. But every year -- every single year -- there is something pretty amazing."

"The coolest thing for me is just seeing how happy and into the show the audience is," Grajeda says. "Because I'm managing a lot of things backstage, I don't ever get to fully experience the show, but I occasionally peek into the room while performers are on stage -- and the smiles on people's faces are incredibly gratifying."

Print Headline: Live From The Library