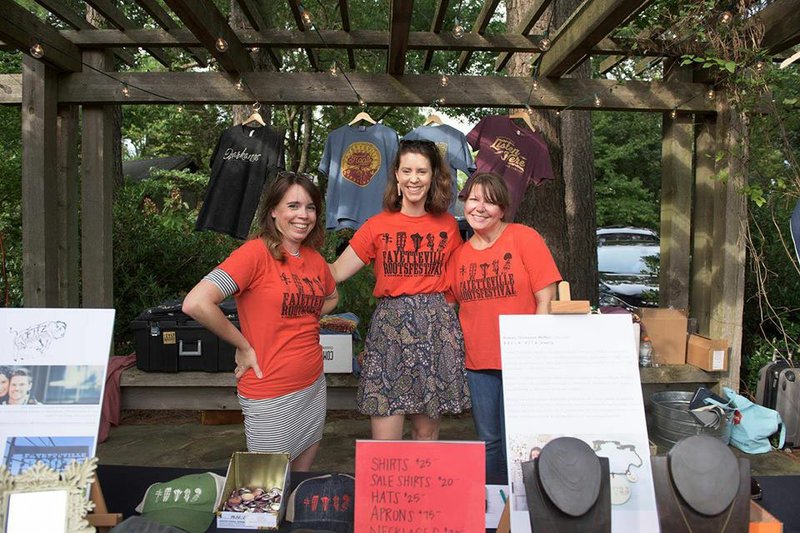 Courtesy photo The Fayetteville Roots Fest could not happen without the help of approximately 150 volunteers, says Maria Gray, volunteer coordinator. "I think we attract such wonderful volunteers because we live in a place filled with people who genuinely care and want to be involved with an event that does so, too."

When musicians Bryan and Bernice Hembree, along with their friend, chef Jerrmy Gawthrop, produced the first Fayetteville Roots Fest in 2010, it was a small affair: Ten acts gathered in town and performed for a relatively small crowd. Fast forward nine years, and that first humble concert has grown into a five-day extravaganza with 10 stages for musical acts and a slate of culinary events that would make any foodie salivate. Thousands now flock to the area for the August event, and it takes a village to run it -- a village made up of about 150 loyal volunteers, according to Maria Gray, Roots Fest volunteer coordinator.

"We are not exaggerating when we say the festival would not be possible without all of our volunteers," says Gray, who became the first year-round employee outside of the founders when she took the job in 2018. She says that volunteers are involved in all aspects of the event, including working in the will-call office for tickets, setting up and selling merchandise, security, directing cars for parking and recycling and sustainability, which, she says, is "by far the largest crew."

Want To Join In?

To find out more about volunteering for next year’s Roots Fest, visit therootsfest.org/volunteer-2.

"I think we attract such wonderful volunteers because we live in a place filled with people who genuinely care and want to be involved with an event that does so, too," she says. "I think that's why we get so many people that volunteer for the recycling and sustainability crew. They genuinely want to help us make sure our event has as little impact on the earth as possible. And after people volunteer once, they enjoy it and want to come back the next year. We even have people who purchase tickets and also volunteer."

For volunteer Michelle Parks, 2019 will mark the third year she's worked with the recycling and sustainability team. She says that part of the draw is meeting people she might not otherwise run into. But what brings her the most satisfaction is seeing the results of the team's hard work.

"It is measurable," she explains. "My second year, [recycling and sustainability leader] Melissa Terry had taken a picture of everything they took to compost from the year before, and she showed us the results of how it had broken down and started to mix in. I thought, 'That's so cool -- it's going to be used on a farm, or to help a garden.'"

Gray says that the average number of shifts worked by volunteers is two, although some work up to four or five. The trade-off is free admission and food at the event they're working.

"I like to think, and have been told by several volunteers, that we provide a great volunteer experience," she says. "In fact, many of the volunteers come back year after year."

Lori Foster and her husband, Greg, have been volunteering with the festival since 2013, when Lori attended a volunteer meeting out of curiosity.

"Bryan [Hembree] is a very good speaker -- I heard him share this vision of what this festival could be, and music and food are my favorite things, so it seemed like a good fit," Foster says. "And seeing organizers that were passionate and good at communicating their passion to a group of volunteers was something I could get behind."

The Fosters have worked in a range of positions over the past five years, and many of their jobs have put them in direct contact with the musicians performing at Roots Fest.

"It's amazing to me that we can draw the kinds of musicians that Bryan and Bernice are able to get," says Foster. "I've been backstage and interacted with the musicians, and I know that they love this festival -- they love coming to Fayetteville and being a part of the community."

In the end, though, it's the camaraderie and the pride in what the Roots Fest family has accomplished that keeps her coming back.

"I think my favorite thing about it is the feeling of community," she says. "Especially when you're a returning volunteer: You get to work with the same people, year after year, and you feel like you're a part of something that's bigger than yourself."

Print Headline: It Takes A Village