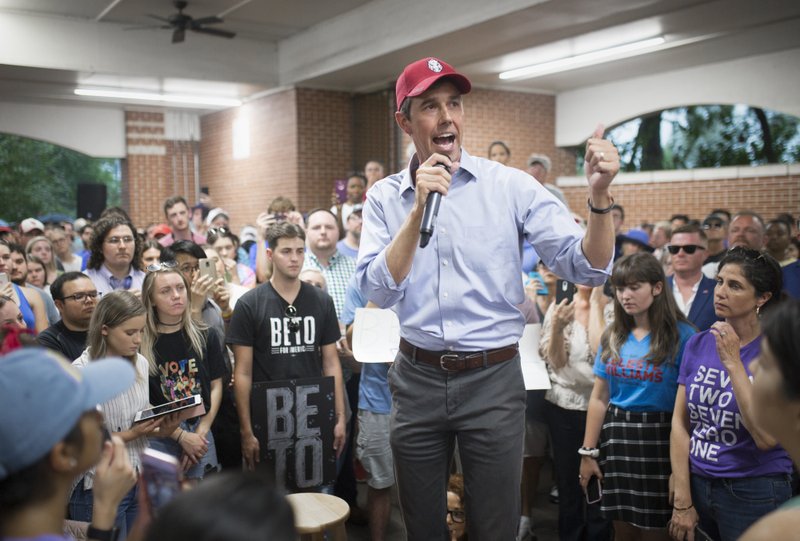 Democratic presidential candidate Beto O'Rourke speaks at a pavilion on the University of Arkansas campus today, Aug. 18. O'Rourke denounced gun violence in his home town of El Paso, Texas and thanked the crowd for attending despite a rainstorm.

FAYETTEVILLE -- Democratic presidential candidate Beto O'Rourke drew about 400 to a rally at the University of Arkansas where he denounced gun violence in his home town of El Paso, Texas and the racism that led to the shooting.

"It's not enough to not be racist, ladies and gentlemen," the former congressman told the crowd at the 12 p.m. rally. "We have to be anti-racist." The El Paso attacker killed 22 people in an attack Aug. 3. O'Rourke had been set to appear Friday in Fayetteville, on his way to an event in Little Rock, but had to quickly rearrange his schedule after going home in the shooting aftermath, according to the University of Arkansas Young Democrats who organized the event. The attacker said in a written statement that he was responding to an "invasion" of immigrants.

O'Rourke started the rally with an Arkansas Razorback hog call, and thanked the crowd for their attendance during a rainstorm. The crowd overflowed the pavilion where the rally was held despite rain, lightning and the presence of a hornet's nest in a nearby tree.