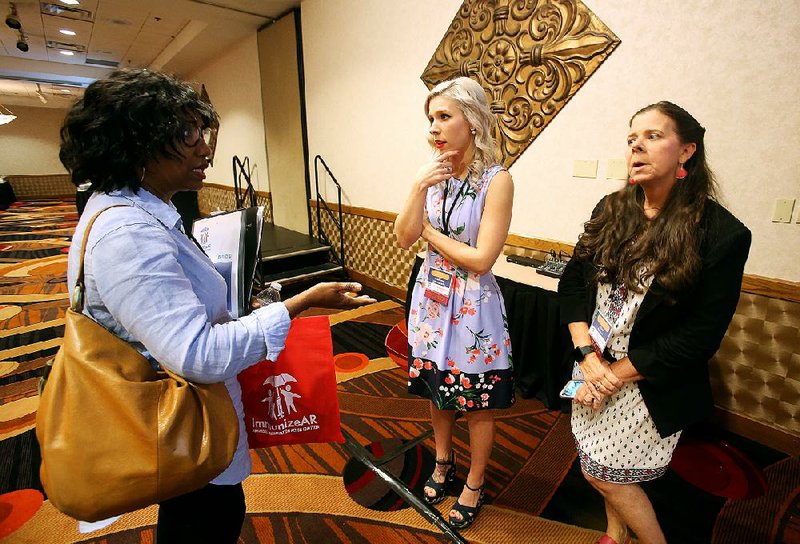 Allison Abromitis (center) and her mother, Bliss Deeter (right), visit with Cheryl Johnson after Abromitis spoke during an immunization event Friday at the Wyndham Hotel in North Little Rock. - Photo by Thomas Metthe

The purple spots told Allison Abromitis something was wrong.

The Arkansas native, then 18, had been discharged from a Baton Rouge emergency room, where she'd complained of nausea, a headache and a stiff neck.

That same night in 2007, she discovered purple blotches on her skin, which a seasoned nurse later identified as a sign of bacterial meningitis.

"Every [survivor] had the same story: I went to the hospital, I was misdiagnosed, I was sent home," she said Friday, speaking to health professionals in North Little Rock.

As Abromitis fell gravely ill -- suffering a stroke, a seizure and multiple episodes of heart failure -- her family members were horrified to learn that her illness could have been prevented.

"No one had said, you know, there is a meningitis vaccine," her mother, Bliss Deeter, told the group. "The guilt I felt, as a parent, that I didn't know ... it changed her life."

Abromitis and Deeter told their story at an annual conference on immunization issues led by nonprofit group ImmunizeAR, held this year at the Wyndham Riverfront Little Rock.

Since recovering from her illness, Abromitis and her mother have become advocates for awareness of the infection, three types of which can be vaccinated against.

Now 30, Abromitis has lingering memory, vision and nerve problems, but thinks of herself as fortunate, recalling a survivors' conference in which she was the only person who hadn't had arms or legs amputated.

"Many people aren't as lucky," she said.

Friday's event was attended by more than 200 public health professionals, health care providers and pharmacists, who gathered to discuss topics such as how best to confront vaccine hesitancy -- the resistance or reluctance to comply with recommended vaccination schedules.

Vaccine hesitancy has been recognized as one of the top threats to global health, according to Rekha Lakshmanan, advocacy and policy director of the Immunization Partnership, a Texas-based nonprofit.

She told the group that one study determined that 28% of Americans aren't convinced vaccines are safe, which is several points lower than the global average.

"We are in some unprecedented times in our country and globally, in terms of the re-emergence of vaccine-preventable diseases," such as recent measles outbreaks, Lakshmanan said.

She said that people who support vaccines need to learn to be as organized as their opponents, which she described as a small but vocal minority that's practiced at lobbying lawmakers.

"[Vaccine supporters] all need to speak up, and be a louder voice within our communities and with our decision-makers," she said.

Through lectures, question-and-answer sessions and exercises with attendees, speakers at the event underlined vaccines' utility in protecting public health.

For example, for every dollar invested in childhood immunizations, $10 in future health costs is saved, according to Dr. Dirk Haselow, chief medical officer and state epidemiologist with the Arkansas Department of Health.

"Bottom line, we have the tools -- we just need to use them" and be "unabashedly supportive" of them, he said.

ImmunizeAR executive director Heather Mercer said that the response to the gathering, now in its third year, has been very positive, drawing participants from across the state, Texas and Oklahoma.

"No one in Arkansas was doing any real education on immunization," she said. "Obviously we need it, because this is our third year and we've got over 200 people coming."

She said she always tries to include a speaker who personally experienced an illness that can be prevented by vaccines, such as cervical cancer.

"People are really moved by hearing from survivors," she said.

In a talk explaining how best to diagnose a measles case, Haselow said Arkansas has been making a lot of progress in its vaccination coverage since 2012.

For kids between 19 months and 35 months of age, the Arkansas vaccination rate for the measles-mumps-rubella vaccine is slightly higher than the national average, he said.

Among kindergartners, who are supposed to have received two doses of that vaccine, rates are lagging in St. Francis, Monroe, Marion, Fulton, Newton, Franklin and Scott counties.

He asked audience members from those counties to reach out to the department with ideas on how to improve vaccine coverage there.

State immunizations director Dr. Jennifer Dillaha, who was in the audience, added that the Health Department's local health units have had a lot of success partnering with schools to get kids caught up on their vaccinations.

A new law taking effect later this year also will require schools to publicly report the number and percentage of students with vaccination exemptions or no vaccination records, she said.

Haselow briefly drew attention to philosophical and religious vaccine exemptions, which he called a "touchy subject" and said are more prevalent in northwest Arkansas.

When speaking with parents on related topics, "it's not helpful to force the issue. It's helpful to be supportive," he said.

Peggy Mott, a pharmacist from Prairie Grove who attended the event, told the Arkansas Democrat-Gazette that she had seen one or two cases of parents expressing doubt about vaccines' safety, all in recent years.

"I just say, well, I think they're safe," she said. "Diseases kill, and vaccinations don't."