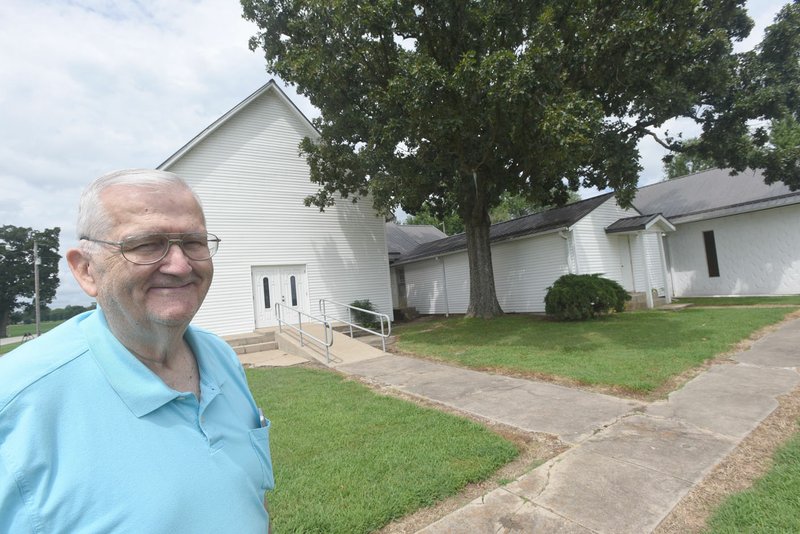 "It's a different world" than it was when Pat Robinson was called to the ministry half a century ago -- and that's nothing compared to when his church, Mason Valley Baptist, was founded. The church, located between Bentonville and Gentry on Arkansas 12, will celebrate its 140th anniversary Sunday. Robinson has been its pastor for four years.

"The church was established on Aug. 15, 1879, and met in the Mason Valley School House, which was located about a quarter of a mile southwest of the current location," member Judy Davis begins the story. "In September 1879, J.H. Hogan was elected as the first pastor.

When: Aug. 18, with Sunday school at 9:30 a.m.; worship at 10:30 a.m.; a catered lunch at noon; and an afternoon program recognizing former pastors and members, recounting the church history, singing and memories. Entertainment will be provided by the Cow Patty Creek Rhythm and Gospel Orchestra.

The church -- built on the half-acre portion with the acre used for parking horse-drawn vehicles -- was completed in 1888, with "everything paid and $9.45 on hand."

Improvements came along with the passage of time -- electricity in August 1938; four classrooms in the 1950s; more classrooms and bathrooms in 1967; and the current sanctuary in the mid-1970s.

What's harder to come by than the buildings were, Pastor Robinson says, is young people.

"The average attendance is 30 to 35," he says. "A lot of sweet folks. But if we don't reach some younger folks, we're not going to be around forever. Change doesn't come very easily, but we felt like the Lord has put us out here for a purpose. I'm still waiting to see whether we'll accomplish it."

Robinson still says "we," even though his second wife, Eloise, passed away last September.

"She said she had never been comfortable in a small church, but this one was different," he remembers, noting she was asked to teach Sunday school within a few weeks of their arrival. It was her first time to be a pastor's wife, he adds, a smile in his voice, and "she filled the role perfectly."

Robinson says the key to growing the church is children, and only about half a dozen currently attend. "We need a children's ministry," he says. "It's our next challenge."

But Robinson also sees signs of Jesus Christ's return, he says, "and they're happening all over the place."

"We believe the Bible to be the Word of God, and salvation to be by grace through faith in Jesus Christ and in Him alone," Davis says in sharing the history of the church. "Spreading the Gospel of Jesus is still our main goal.

"Any church, large or small, must depend on the Lord for its life," she adds. "After that, it is the divine sense of calling that the congregation senses, when the Lord placed us in this community to minister 140 years ago. The call to be His ministers where we are is still our calling today."