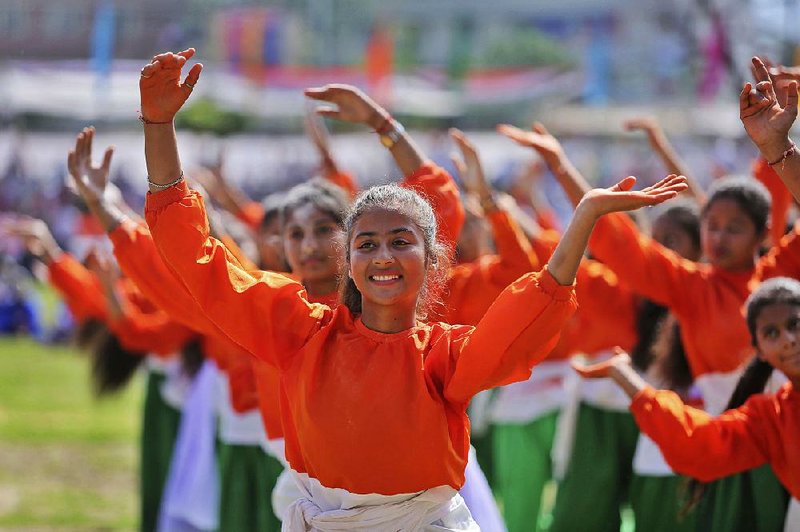 BEIRUT -- Syrian forces gained more ground from insurgents in the country's northwest on Thursday, edging closer to a major rebel-held town a day after militants shot down a government warplane in the area.

The government offensive, which intensified last week, has displaced nearly 100,000 people over the past four days, according to the Syrian Response Coordination Group, a relief group active in northwestern Syria.

Syrian troops have been on the offensive in Idlib and its surroundings, the last major rebel stronghold in Syria, since April 30. The region is home to some 3 million people, many of them displaced in other battles around the war-torn country.

The fighting over the past days has been concentrated on two fronts as government forces march toward the town of Khan Sheikhoun from the east and west. The latest offensive also aims to besiege rebel-held towns and villages in northern parts of Hama province, according to opposition activists.

The town of Khan Sheikhoun is a stronghold of al-Qaida-linked Hayat Tahrir al-Sham, the most powerful group in the rebel-held areas. The town was the scene of a chemical attack on April 4, 2017, that killed 89 people.

At the time, the United States, Britain and France pointed a finger at the Syrian government, saying their experts had found that nerve agents were used in the attack. Days later, the U.S. fired 59 U.S. Tomahawk missiles at the Shayrat air base in central Syria, saying the attack on Khan Sheikhoun was launched from the base.

The Syrian government and its Russian allies denied there was a chemical attack.

SEREMBAN, Malaysia -- Malaysian police said Thursday that there were no signs of foul play in the death of a 15-year-old London girl who disappeared from a nature resort, with an autopsy showing she succumbed to intestinal bleeding as a result of starvation and stress.

Nora Anne Quoirin's body was discovered Tuesday beside a small stream about 1.6 miles from the Dusun eco-resort after she disappeared from her family's cottage on Aug. 4.

Negeri Sembilan state Police Chief Mohamad Mat Yusop said the autopsy found no evidence the teenager had been abducted or raped. She was estimated to have been dead two or three days and not more than four when her naked body was found, he said.

"For the time being, there is no element of abduction or kidnapping," he said a news conference at a police station.

"The cause of death was upper gastrointestinal bleeding due to duodenal ulcer, complicated with perforation ... it could be due to a lack of food for a long period of time and due to prolonged stress," he said.

Mohamad said there were also some bruises on the girl's legs but they wouldn't have caused her death. Samples taken from her body will be sent to the chemistry department for further analysis, he said.

The girl's family has said she wasn't independent and wouldn't have wandered off alone because she had learning and physical disabilities. Police believe she climbed out through an open window in the living room of the cottage but said they were investigating all aspects including possible criminal elements.

Police from Ireland, France and the U.K. are in Malaysia to assist in the investigation. The girl's mother is from Ireland and her father is French, but the family has lived in London for 20 years.

LONDON -- British police say a second police officer who responded to a March 2018 nerve agent attack in the English city of Salisbury was exposed to the novichock agent.

Sergei Skripal, a Russian spy turned double agent for Britain, and his daughter Yulia spent weeks in critical condition after being exposed to the agent. Police officer Nick Bailey also was sickened.

The London police force said Thursday that another officer showed signs at the time of having been exposed to a "very small amount" of the agent, and that tests had now confirmed it.

Months after the attack, a man found a perfume bottle containing traces of the discarded nerve agent. He became severely ill and his girlfriend died from the exposure.

South Korea's Joint Chiefs of Staff said projectiles were twice launched from an area on the North's eastern coast, but didn't give any other information.

It was North Korea's sixth round of weapons launches since late July when it began stepping up its tests while expressing frustration over stalemated nuclear negotiations with the U.S. and continuance of U.S.-South Korea joint military drills that the North sees as an invasion rehearsal.

The White House said it was aware of reports of the launches and was consulting with Seoul and Tokyo. 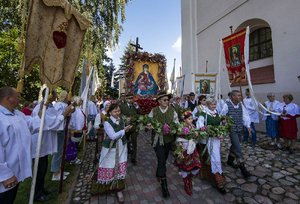 Photo by AP/MINDAUGAS KULBIS
Catholic pilgrims carry the icon of the Virgin Mary during a procession Thursday for the feast day of the Assumption of Mary in Trakai, Lithuania.