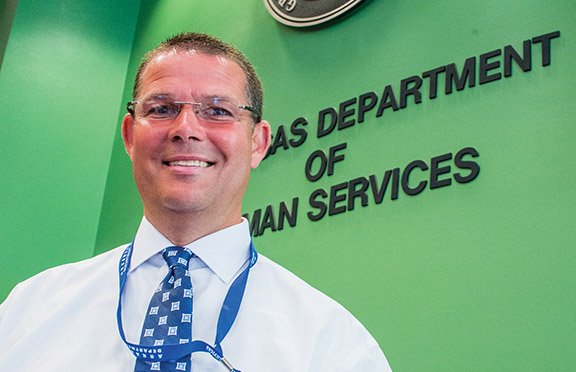 Craig Cloud is shown in this file photo.

The director of the state agency responsible for inspecting and licensing businesses that serve Medicaid recipients is stepping down for a job with one of those providers.

Craig Cloud, director of the Department of Human Services' Provider Services and Quality Assurance Division, said he has been hired as the executive vice president over strategy and planning at Friendship Community Care, a Russellville organization that serves people with developmental disabilities and mental illness.

"It was a great opportunity that was presented to me, and I felt that it was the best decision for me and my career at this point in time," Cloud, 49, said Thursday.

The date for his departure from the Human Services Department hasn't been set but likely will be early next month, he said.

Cloud had been director of the Provider Services and Quality Assurance Division since it was created in 2017.

The state's transparency website lists his annual salary as $123,154. Cloud declined to say how much he will make at his new job.

He said he will follow Arkansas Code 19-11-709, which permanently prohibits former state employees from being involved as a "principal or agent for anyone other than the state" regarding any state contract in which that employee provided "decision, approval, disapproval, recommendation, rendering of advice, investigation, or otherwise while an employee."

The law also bars state employees for one year from acting for a private company in connection with contracts that were within the person's "official responsibility" while employed by the state.

"Anything that I would have had any direct responsibility over, I will not have any involvement in" at Friendship Community Care for the one-year "cooling-period," Cloud said.

In a resignation letter dated Monday, he called serving in Gov. Asa Hutchinson's administration "an honor and highlight" of his career.

Under a department reorganization, the Provider Services and Quality Assurance Division took over inspection, certification and licensing duties that had previously been handled by four other department divisions.

It also trains providers on department regulations and studies the workforce needs of the department and health care providers.

"During the last four and a half years, Craig has served as a key member of the DHS leadership team and worked incredibly hard to stand up our newest division," Human Services Secretary Cindy Gillespie said in a statement Thursday.

"He has focused on making our operations more efficient and on ensuring there are quality-providers serving our most vulnerable populations.

"Though we'd love to see him continue his service here, he has a wonderful opportunity, and I wish him all the best."

Among the agencies Cloud's division absorbed was the department's Office of Long Term Care, which licenses and inspects nursing homes.

The office's then-director, Carol Shockley, cited differences with Cloud, including his decision to fire the office's business operations manager, when she abruptly quit in January.

Cloud said his departure from the Human Services Department was unrelated to the dispute with Shockley and GoBell.

"The failure of DHS to provide effective oversight of nursing homes under Craig Cloud's tenure is breathtaking," Deaver said in an emailed statement. "The number and seriousness of the cases of neglect and abuse that I have been contacted about, is clear evidence that he should have never been allowed to be in the position he had."

She called the redaction of public records on nursing home investigations "the worst I have seen in my twenty-five years of advocacy."

Deaver also criticized the department's handling of the transfer of Skyline licenses to new operators.

The department seized control of just two of the company's 22 homes in the state and monitored the others until they were sold. One of the homes went to a man who was ordered to pay $83.1 million in a fraud judgment in 2015, and 19 others went to firms with business or management ties to Skyline.

Human Services Department spokeswoman Amy Webb has defended the department's actions as "thoughtful and thorough in a really difficult situation."

Previously, Cloud had been director of the department's Aging and Adult Services Division, which is now part of the Aging, Adult and Behavioral Health Services Division after having been combined with another division.

Cloud had been chief compliance officer for Arkansas Enterprises for the Developmentally Disabled before being hired as the Aging, Adult and Behavioral Health Services Division director in 2015.