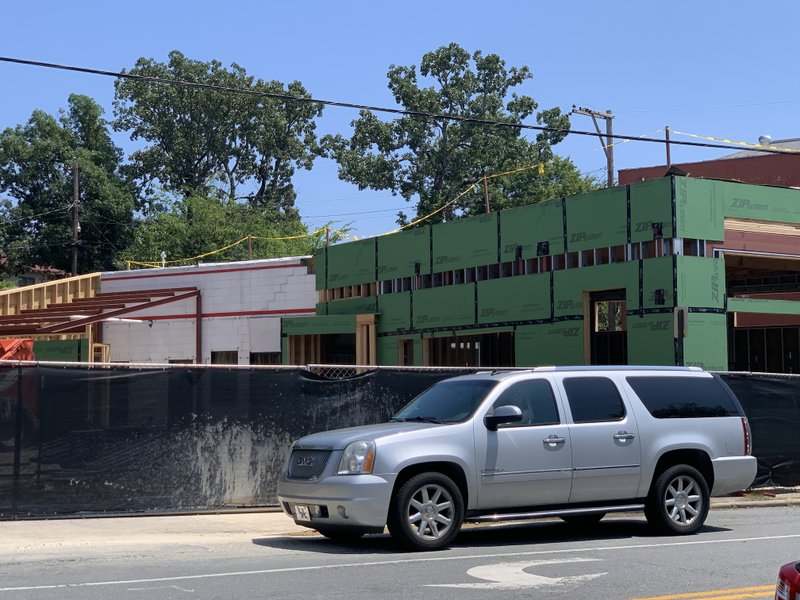 Diablos Tacos & Mezcal, an upscale Mexican restaurant that opened in February at 528 Central Ave., Hot Springs, has signed a lease to open a second location at 300 President Clinton Ave. at the confluence with LaHarpe Boulevard. (The 5,500-square-foot space started out as the "Rumba" restaurant half of Rumba & Revolution — the "Rev Room" music venue has remained open — and most recently housed the very short-lived Live Life Chill.)

Partner and general manager Antonio Gonzalez says the target to open will be November or December. He describes Diablos as a "new concept in Arkansas ... pairing mezcal and a good selection of wine with the best of Mexico and Mediterranean food." The menu, which he expects will expand in Little Rock over the one in Hot Springs, focuses on "urban" tacos and tapas, the latter based primarily on olive oil, wine, bread and cheese. (Check it out at diablostacosandmezcal.com.)

J. Daniel Bryant has applied for a "Restaurant Mixed Drink Minimum" permit for his Hill Station, nearing completion and with a target October opening on the lot that formerly held Helmich's Auto Service, 2712 Kavanaugh Blvd., Little Rock. Construction has included a large extension onto the front of the former service station, the shell of which has survived, and the removal of a house behind the station to provide an outdoor park and green space. The new restaurant will seat nearly 100 and will serve burgers and sandwiches at lunch and a yet-to-be disclosed menu for dinner.

Steve Shuler of food blog Rock City Eats, who has an inside track as chair of HarvestFest, a committee of the Hillcrest Merchants Association, of which Bryant is vice president, reports the opening is timed to coordinate with the big annual Hillcrest festival, which covers several blocks of Kavanaugh Boulevard each fall with food trucks, craft booths and all kinds of fun and games.

Bryant, meanwhile, has closed his nearby District Fare, 2807 Kavanaugh, and Rock City Eats reports it will reopen later this fall, as just a remodeled meat market and not a sandwich shop, and to be named once again as H.A.M. — likely abbreviating Hillcrest Area Market rather than its former moniker, Hillcrest Artisan Meats. Shuler explains that Bryant will be using the space as a training kitchen for Hill Station employees and as the Hill Station prep kitchen, but after being remodeled it will have double the meat counter space (but no seating) and sell additional market items, including bread, cheese, oil and local foodstuffs and need-to-heat meals to-go (but not sandwiches). H.A.M. founder Brandon Brown will still be affiliated with the business, Shuler reports.

The new target, bridging any further delays in final setup and inspections, is now the end of next week for the opening of the resurrected Rocky's Pub, now going, at least officially, by Rocky's on Country Club, 117 Country Club Road, Sherwood, in what once was Jo Jo's Bar-B-Q. Operating hours will be 11 a.m.-2 p.m. and 4-9 p.m. Monday-Thursday, 11 a.m.-2 p.m. and 4-10 p.m. Friday-Saturday. The phone number is (501) 392-6150. And the new Facebook page is facebook.com/Rockysoncountryclub.

Something — we're still not sure what — is going into the former Southern Gourmasian space, 219 W. Capitol Ave., Little Rock. The list of city building permits that came out Monday includes one for $15,000 for the addition of two walls and lighting; a drive-by shows work is proceeding on the interior, with wooden panels over the windows — possibly the consequence of a July 24 burglary, with a reported loss of property valued at $1,055. We've also spotted a notice of application for a liquor permit out front.

Lakewood Lounge, 4801 North Hills Blvd., North Little Rock, is going through a transitional period that will likely result in new ownership and a new name, but it's still operating, 11 a.m.-3 p.m. and 5-9 p.m. Tuesday-Saturday. We're told complicated legal matters are involved so we're not sure just what that new name and ownership will look like, but a search for the Lakewood Lounge Facebook page has given us a big clue: It's now the Lakewood Fish and Seafood House Facebook page (facebook.com/LakewoodSeafoodHouse). The phone number remains the same: (501) 758-4299.

Pending a final inspection for certificate of occupancy earlier this week, Yeh Mon Jamaican Restaurant owner Patrick Blackburn says after innumerable delays that he hopes to be open by the end of this week or the first part of next in the Bowman Curve Shopping Center, 200 N. Bowman Road, Little Rock. It's west Little Rock's second Jamaican restaurant (Taste of Jamaica has been up and running for a couple of months on North Rodney Parham Road); Blackburn has been promising a menu of curried and jerk chicken, red beans and rice, curried goat, ox tails and brown-stew chicken and brown-stew steak. Hours will be 11 a.m.-8 p.m. Tuesday-Thursday, 11-9 Friday-Saturday, 11 a.m.-5 p.m. Sunday. The telephone number is (501) 246-4912.

A delay in the arrival of his walk-in refrigerator has forced Dickey's Barbecue Pit franchisee Lonnie Shere to push back to Aug. 29 his target to open the Dallas-based chain/franchise operation in the former Starbucks, 9401 N. Rodney Parham Road, Little Rock. Just to recap: Dickey's offers a primarily Texas-style barbecue menu; the restaurant will have inside seating, a drive-thru and "an awesome patio" on which Shere says he's planning to put a 1941 Chevy pickup from which he has removed the bed and put a table. Tentative hours will be 11 a.m.-9 or 10 p.m. daily. The phone number is (501) 223-3425.

And the central Arkansas-based Eat My Catfish chain heads northwest, planning this fall to open a location at 32 W Joyce Blvd., Fayetteville. Travis Hester, who operated an Eat My Catfish food truck in Benton, opened his first location there in 2012 and has since expanded to Conway, Little Rock and North Little Rock.