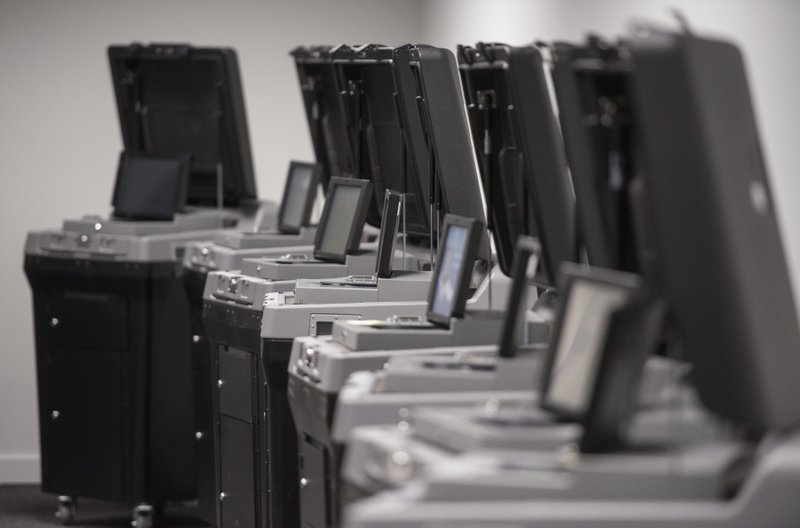 FILE PHOTO A row of DS200 precinct scanner and tabulator machines sit out for testing Tuesday, April 24, 2018, at the Benton County Election Commission office in Rogers.

Benton County received $1.2 million from state taxpayers Thursday to reimburse half the cost of new voting machines purchased in 2017.

The money comes from Act 808 of 2019. The law transferred $8.2 million from the state's Property Tax Relief Fund, which had a surplus, to the County Voting System Grant Fund administered by the Secretary of State's office.

The money goes to either help counties upgrade their equipment or reimburse them for a share of the cost of recent upgrades.

All the equipment before the purchase was at least 11 years old, according to discussion at the time. The Nov. 8, 2016 election in the county suffered mechanical issues in 16 of its 489 machines. About half of the machines before the 2017 purchase could no longer be covered by maintenance contracts because of their age.

Washington County purchased new voting machines in 2016, with the state bearing about $1 million of the $1.65 million cost for 357 machines. Washington County's reimbursement was in part because it participated in a state pilot program to test the equipment.

"We are thankful to the state's commitment for ensuring a secure voting experience with the updated voting equipment," Benton County Judge Barry Moehring said in a statement Thursday morning.

The county was notified the reimbursement was coming in an Aug. 8 letter from Secretary of State John Thurston.

"Please be advised that these funds, as per our understanding with the General Assembly and Gov. [Asa] Hutchinson, are to be used exclusively for costs associated with the purchase of new voting machine equipment."

The $8.24 million will be used to buy new equipment for the remaining 21 counties and reimburse three counties half of what they spent to buy new equipment, Naumann said. The secretary of state's office estimates that Benton County will be reimbursed $1.3 million; White County, $537,629; and Ashley County, $238,151.

The secretary of state's office has estimated that the 21 counties' share of the cost of the new voting machines will be $6.79 million, so the total spent will be about $15 million, said Kurt Naumann, director of administration and legislative affairs in the office.

The state's property tax relief fund is financed by a half-cent sales tax imposed to make up for lost local school district revenue from a homestead exemption on property taxes. That exemption passed in 1999. It allows a credit of up to $350 on the property taxes owed on a privately owned home. The associated sales tax had more than made up for the lost property tax revenue for years, creating the surplus.

The bill that became Act 808 passed the House 86 to 3 in a March 28 vote. The Senate approved the final version of the bill in a unanimous 35-0 vote on April 4.