The good news for Little Rock Catholic's football opponents is they don't have to game plan to stop much-honored running back Samy Johnson.

So, Fogleman was asked, what can the Rockets do to compete in a Class 7A-Central conference filled with behemoths like North Little Rock, Bryant and Conway, last season's top three finishers?

Or, at least be in the running for a playoff spot like the Rockets did last season when finishing 5-6 after a 4-0 start.

"We'll have to do some different things," he said, wiping the sweat off his forehead after a recent late afternoon practice. "Got some kids, we've got to do stuff to their strength. We've been doing stuff around him [Johnson].

"Kids move on, you get to watch 'em grow, and you get to do something different now."

Catholic, picked to finish last in the eight-team 7A-Central, is not devoid of talent.

"He's going to do both for us," Fogleman said of Eddington. "When we rest him it will probably be on the offensive side of the ball."

When Eddington is out, Johnson will move from wide receiver and take snaps.

"Nathan is a capable quarterback," Fogleman said. "He's just got a really good head on his shoulders."

Senior Brian Alsbrook (55-213 rushing, 4 TDs) backed up Samy Johnson last season, and he will be the lead man in a committee that includes Brandon Bisceglia, Jack Currence and Jason Stith.

"Each one of them does something a little better than the other one," Fogleman said. "It's going to be one of those."

A big key for the Rockets will be on the offensive line, where Sam Plafcan (6-3, 250) anchors a group that can't afford to get hit by injuries.

"We don't have many 250-pound kids like him," Fogleman said.

"I think we're better defensively in the secondary than we've been," Fogleman said, mentioning Grant Smithson, Brice Stine, Nathan Lane, Jackson Daniel and John Henry Duce as key pieces in the back four. "They run well, have better ball skills. We just can't give up that huge play. Those guys are our last line of defense. I think they cover better than we have the past couple of years."

Even with an improved defense and big-play threats on offense, Fogleman said he has no illusions about winning the conference or going deep into the Class 7A playoffs.

A nonconference schedule that begins at Class 6A power Jonesboro, and includes a tough Sylvan Hills team will make it difficult for the Rockets to get off to a flying start as they did last season.

"In order for things to work for us, everything has to go right," Fogleman said. "You've got to get some breaks, and we've got to avoid the injury bug.

"Yeah, we've made the playoffs every year but one. These kids stick with it. Great group of kids. They're not going to give up."

Fogleman may sound cautious when appraising his team's chances, but he also knows that there is an assumption the Rockets will be powerless without Samy Johnson.

That's what his players have heard all offseason.

"We lost a big talent, but we've got a little more than people think," Fogleman said. "I told the boys, let's focus on who is here instead of who's not." 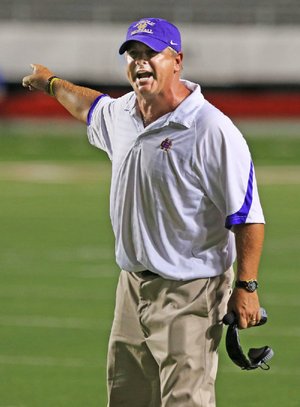 Rockets at a glance