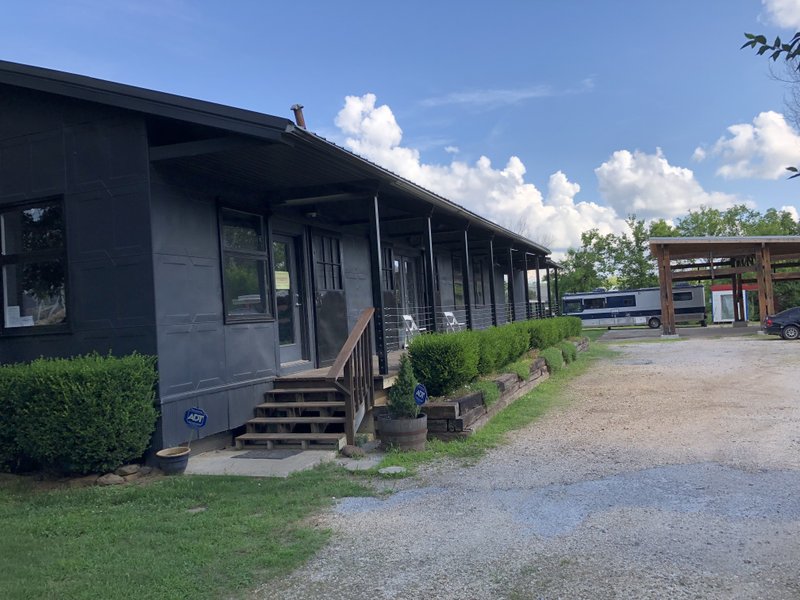 File photo/NWA Democrat-Gazette/STACY RYBURN The site of the future Prairie Street Live venue is seen July 3 at 509 W. Prairie St. The Planning Commission on Monday approved its permit to have outdoor music.

FAYETTEVILLE -- Planning commissioners agreed to give the "live" portion of Prairie Street Live a three-month trial to see how well the venue meshes with the neighborhood.

The commission voted 8-0, with Rob Sharp recusing, to approve a permit allowing outdoor music at 509 W. Prairie St. The decision came after several commissioners toured the site for a sound test last week.

Prairie Street Live will be able to have music until 10 p.m. Friday and Saturday and 9 p.m. for all other days. One show per week will be allowed, or two, in association with an event such as Bikes, Blues and BBQ or Fayetteville Roots Festival. All performances will be subject to the city's noise ordinance.

Commissioners also asked to review the permit after three months to go over neighbor reaction and compliance with the conditions of the approval. If there are numerous complaints or if the venue violates the agreement, the commission can change the terms or revoke the permit.

Seven members of the public spoke. Two expressed concerns about the potential for noise, with five showing enthusiasm for the business opening.

Rhonda Dillard, a member of Ultra Suede party band, said that part of town is evolving. Having a live music venue near the library's expansion and more restaurants, pubs and foot traffic makes sense, she said.

"It needs to be added to the mix," Dillard said. "I think the evolution of Prairie Street is inevitable, and a live music venue in this area will only enrich the Fayetteville experience during this time of growth and expansion."

Jason Bigbee, speaking with Prairie Street Live, said the idea is to have the place serve as a trailside park with bars and restaurants, regardless of the music specifications.

"The idea of doing live music -- we're kind of dependent on when things are arriving through the area," he said. "We appreciate the flexibility on which days for some of those events, and we understand the time frames there."

Commissioner Leslie Belden acknowledged personal preference determines whether a person finds music to be a nuisance or something positive. However, she said she was comfortable with the request, especially as a trial run.

"I see change occurring in Fayetteville all along from Dickson down to MLK," she said. "I think this is only one of many different proposals we'll see in front of us for a while."

In other business, the commission unanimously approved plans from Specialized Real Estate Group for the former Farmers Cooperative southwest of West Martin Luther King Jr. Boulevard and South School Avenue. The group showed designs to renovate the Co-op structures, with new buildings for apartments on the southeast portion of the property.

The plan includes 21,660 square feet of commercial space with 220 dwelling units. Chris Baribeau with Modus Studio, the architect firm partnering on the project, said the land to the southeast, along Tanglewood Branch, will become a city park. The developers want to keep an old trestle bridge there intact, but a structural analysis is needed, he said.

Chairman Matt Hoffman said the railroad heritage is crucial to the site, and that he was glad to see the developers kept that in mind.

The commission also forwarded to the City Council a rezoning request from the Fayetteville Housing Authority for its North Gate property. The property is the site of the former Hi-Way Inn and Motel, and includes Cafe Rue Orleans.

The property, on College Avenue across the street from Veterans Health Care System of the Ozarks, has served as the home of residents living at Hillcrest Towers while work to fix the sewer pipes at the towers is ongoing. The authority plans to eventually house veterans and mixed-income residents at North Gate. Cafe Rue Orleans will stay.