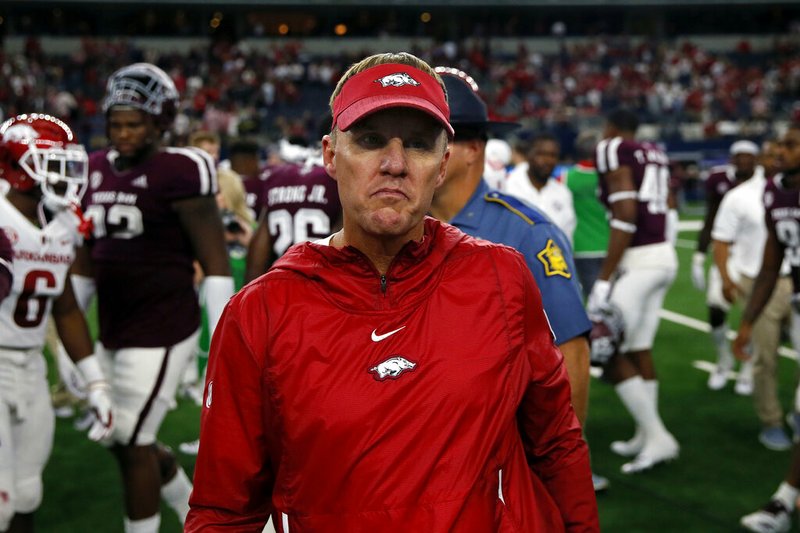 FAYETTEVILLE, Ark. -- Whether it was a fluke of a first year or an ominous harbinger, Chad Morris' inaugural season as Arkansas head coach was an on-field disaster.

The 2-10 record yielded the worst winning percentage and tied for the second-lowest number of total wins in school history. No Arkansas team since 1952 had failed to win at least three games.

His second year running the show at Arkansas appears to be less daunting on paper, even if no one expects an outright turnaround. Not even some of the best Razorbacks players.

"I wouldn't say (Arkansas is) so much slept on. It's understandable," defensive lineman McTelvin Agim said at SEC Media Days, where the Razorbacks were predicted to finish last in the SEC West. "We were 2-10 last year. If we were 2-10, why would you expect us to be anything better? I can't be upset (if) we were 2-10. We made the bed. We're laying in it. We've been laying in it. Now it's time to get up out of it."

Arkansas opens the season at home Aug. 31 against Portland State before Colorado State, whose 3-9 record last year included a win over the Razorbacks, visits Sept. 14.

Having a roster laden with 51 freshmen and 23 sophomores, Arkansas isn't going to have experience on its side when it comes to depth. Morris and his staff do have 12 starters returning, but after such a down season it's an open question how many of those jobs are up for grabs.

Agim and linebacker De'Jon Harris are cemented into their spots defensively, having been named second-team (Harris) and third-team (Agim) preseason All-SEC picks. A year ago, the Hogs had the 79th overall defense in the nation (11th in the 14-team SEC), giving up 413.2 yards per game (6.0 per play); they were a woeful 107th in scoring defense after surrendering an average of 34.8 points per game -- 13th among SEC teams.

Morris, who made a collegiate name for himself coaching high-powered offenses at Tulsa and Clemson before taking the top job at SMU in 2015, never found himself a reliable offensive threat with the Razorbacks last season. Arkansas was last in the conference in scoring and 13th in total offense.

The best hope for a breakout player may be running back Rakeem Boyd. The junior college transfer ran for 734 yards even without becoming the team's full-time No. 1 until the fifth game of the season. Tight end Cheyenne O'Grady could blossom. His 30 catches tied for the team lead and his six touchdowns led both rushers and receivers.

Someone has to get the ball to O'Grady and some of the nearly 10 wide receivers vying for playing time. A year ago, four different quarterbacks were used at various points during the year. John Stephen Jones, whose grandfather is Arkansas alum and Dallas Cowboys owner Jerry Jones, played only a few snaps in three games the Razorbacks lost by a combined score of 134-23.

Ty Storey, Cole Kelley and Connor Noland are all gone. Jones remains and is believed to be in competition with the two more likely starting candidates: Morris' former starter at SMU, Ben Hicks, and former Texas A&M starter Nick Starkel.

"I think when you look at our quarterback room in general and the additions we brought in, how active and aggressive we were in the offseason, says values about where our football team is right now," Morris said.

Activity and aggression have been staples since Morris arrived in December 2017 following the firing of Bret Bielema. The two men couldn't be more different and Morris is still remaking Arkansas in his image, and using an extraordinary number of first- and second-year players to do it.

"I think with anything you do the second time you're going to be better at it," Morris said. "I think you see that with our players and our staff. Coming into Year Two, if you're not all in, don't waste your time."