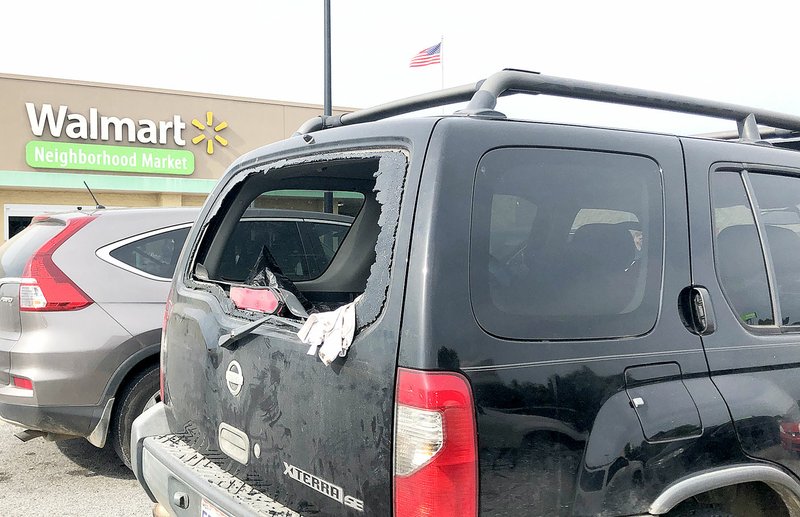 NWA Democrat-Gazette/ANNETTE BEARD A 4-month-old boy was rescued from this vehicle in the parking lot at the Walmart Neighborhood Market in Pea Ridge Sunday afternoon. Nathaniel Holt broke the back glass with a brick, unlocked the vehicle and his wife, Michelle, got the child out.

A mother told police she forgot her baby was in the back seat of her car Sunday because she didn't have her 4-year-old child with her, according to a probable cause affidavit.

Had the older child been in the car, Karlee Mae Spear told police, she would have remembered to get her four-month-old son out before going in to a Pea Ridge grocery store, according to the affidavit.

Spear, 21, and Ashlee Jean Danley, 26, both of Seligman, Mo., were arrested in connection with misdemeanor endangering the welfare of a minor, according to their jail booking information.

They have Sept. 10 court dates in Pea Ridge District Court. Bond was set at $2,000 each Tuesday.

The infant had been locked inside a black Nissan Xterra without running air conditioning. The infant appeared to be very hot. His skin was red, and he was sweating profusely and struggling to breathe, according to police. The outside temperature was about 95 degrees, according to the affidavit.

Nathaniel and Michelle Holt, a husband and wife of Washburn, Mo., were loading groceries into their car when they noticed a crowd around the Xterra, Michelle Holt told police. She and her husband broke the back window and got the baby out, according to police.

They undressed the baby and took him inside the store to cool down. Paramedics took the child to Arkansas Children's Northwest in Springdale, according to the affidavit.

Spear told police she and Danley went to Pea Ridge to shop. She estimated they were in the store for about 30 minutes. She said she didn't realize she left the infant in the car until police found her. Her four-year-old was home with his father, she said.

Danley, the baby's aunt, told police she the reason why she didn't remember to get the infant out was because her four children were at their home in Missouri, and she didn't have children on her mind, according to the affidavit.