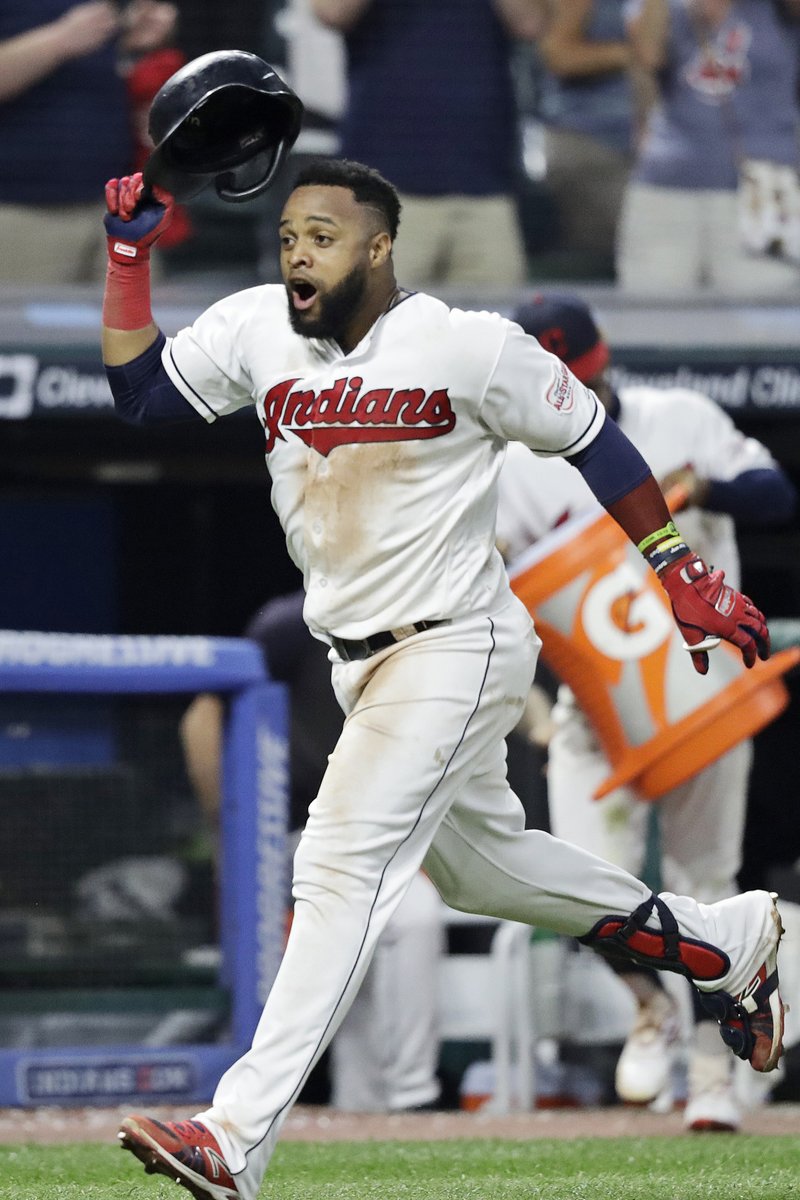 CLEVELAND -- Carlos Santana homered leading off the ninth inning to send the Cleveland Indians to a 6-5 win over the fast-fading Boston Red Sox on Monday night and back into first-place in the AL Central.

After the Red Sox tied it in the top of the inning, Santana connected on a 2-2 pitch from Marcus Walden (7-2), driving it barely over the wall in left to give the Indians their biggest win this season.

Santana circled the bases and was mobbed at home by his overjoyed teammates. The Indians moved past the idle Minnesota Twins and are alone in first for the first time since April 19.

José Ramírez hit a three-run homer and Franmil Reyes had a two-run shot as the Indians improved to a MLB-best 43-17 since June 4, when they trailed the Twins by 10 ½ games.

Down 5-1 after three innings, the Red Sox chipped away and finally tied it in the ninth on a two-out double by Xander Bogaerts off Indians closer Brad Hand (6-3).

Hand gave up a one-out walk and struck out Rafael Devers before Bogaerts doubled off the right-field wall. It was the second blown save in two days for Hand, an All-Star who has not had his usual command in his last few outings.

But Santana bailed him out and added a new chapter to his own comeback season with Cleveland.

J.D. Martinez and Jackie Bradley Jr. homered, but Boston lost for the 12th time in 15 games.

The defending World Series champions are quickly vanishing from the playoff picture as well. They came in trailing the New York Yankees by 16 games in the AL East and 7 ½ back in the wild-card race.

Reyes connected for his first homer since joining the Indians in a trade last month off Eduardo Rodriguez in the first inning, and Ramirez connected in the third as the Indians built a 5-1 lead and held on despite squandering several scoring opportunities.

Ramírez has returned to his All-Star form with a torrid streak over the past two months. His homer in the third was his 17th.

Santana and Reyes singled before Ramirez dropped down and pulled a 2-2 curveball, sending it high over the wall in left while looking like a golfer hitting a 7-iron.

The Indians were without slugger Yasiel Puig, who pulled the appeal of his three-game suspension for his involvement in the July 30 brawl with Pittsburgh while he was with Cincinnati.

After Santana drew a two-out walk, Reyes, who came in batting just .111 (4 of 36) since coming to Cleveland from San Diego, drove an 0-1 pitch into the bullpens in right-center.

Red Sox: LHP David Price, out with a cyst in his left wrist, played catch at Fenway Park on Monday. The five-time All-Star had a cortisone injection last week after being placed on the injured list.

Indians: Two-time Cy Young winner Corey Kluber will start for Double-A Akron on Tuesday as he nears his return from a broken right arm. Kluber, who pitched three innings last week at Triple-A Columbus, is scheduled to throw roughly 65 pitches. He's been out since May 1, when he was nailed by a line drive in Miami.

Red Sox: LHP Chris Sale (6-11, 4.41 ERA) will start needing five strikeouts to reach 2,000 in his career. According to information provided by the Red Sox, Sale could reach the milestone faster than any pitcher. He's thrown 1,623 innings. Hall of Famer Pedro Martinez reached 2,000 strikeouts in 1,711 1/3 innings.